Exploring disorientation and dissonance through art 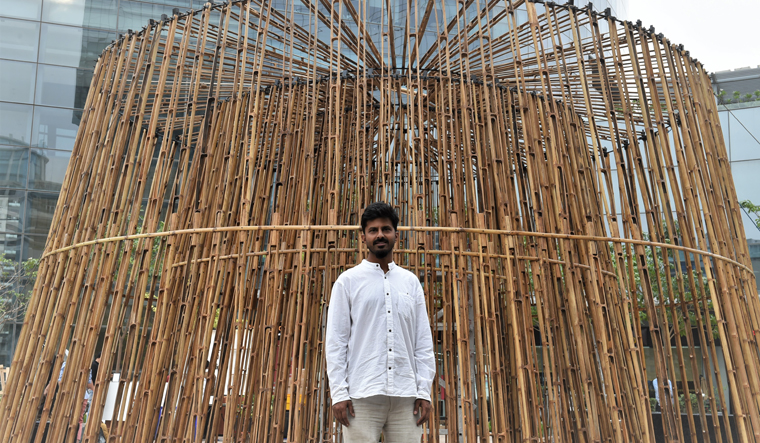 Disorientation and Dissonance can be perceived in different ways, but artists Nripal Adhikary and Mriganka Madhukaillya are exploring peace and noise with their artworks. Exploring varied mediums, the two artists explore the dichotomy of life at an art show '(Dis)Orientation and (Dis)Sonance', a joint initiative of DLF5 and Serendipity Arts.

Using bamboo as a medium, Nripal Adhikary's sculptural artwork 'Kora' talks about finding peace in a materialistic and monotonous life. As a professional architect, Adhikary has always been involved in creating modern spaces using traditional and unconventional materials such as wood, steel and metal. But, for his show, he has chosen bamboo, as it is a more economical, global and environment-friendly medium.

The Nepal-based artist's bamboo sculpture is like a shell that expands and develops into layers. In the literal sense, Kora is the prayer movement made in Tibetan Buddhist temples. The monks circle around the temple in a clockwise direction, rotating prayer wheels as they go. The walk becomes an act of meditation and allows people to release themselves from the 'noise that is life'. Using the same concept, the artist, through his structural art, gives people a chance to break free from the noise that they experience in their daily lives.

“Kora is based on a Buddhist concept that allows people to go around the stupa in a meditative space. I feel people these days are just moving back and forth in life as if they are running a race. This is symbolic of them breaking free from their mundane lives full of capitalism and consumerism,” he explains.

Adhikary chose the bamboo for its sleekness. He found it to be heterogeneous in nature, in varied shapes and sizes. He also found the material complementary to the theme. “Since the structure allows movement and space, it can be used as a road to self-discovery and we thought it would do justice in representing disruption and disorientation,” he explains.

On the contrary, Mriganka Madhukaillya's perspective on the theme spreads the idea of noise through his video art 'Noise Life'. Based on the philosophy of Gilles Deleuze and Felix Guattari called ‘schizo analysis’ which deals with intense sensory experiences, the work depicts the noisy and chaotic yet routine experiences of everyday life. The conscious form is to minimalise this energy, while the subconscious tries to dissect it in great detail and turn it into healthier cultural flows of desire and information.

The video art is a product of a thought that everything is off-sync and there is dissonance. The film beautifully captures the hidden voices that keep on playing in people's heads, material success notwithstanding.

Explaining the concept, the Guwahati-based artist says, “Noise Life is connected to the idea of how, everyday, we are producing noise, and looks at the idea of capitalism. This film is about knowing yourself and also on the idea of schizophrenia, not the clinical one, but as a phenomenon which makes people disjointed from the world. The attempt of this is find ways to make livable spaces.”

The artworks can be seen at Horizon Plaza, Gurugram, till May 31.