In frames: 'Parched' reality of the Himalayas, your favourite summer getaway 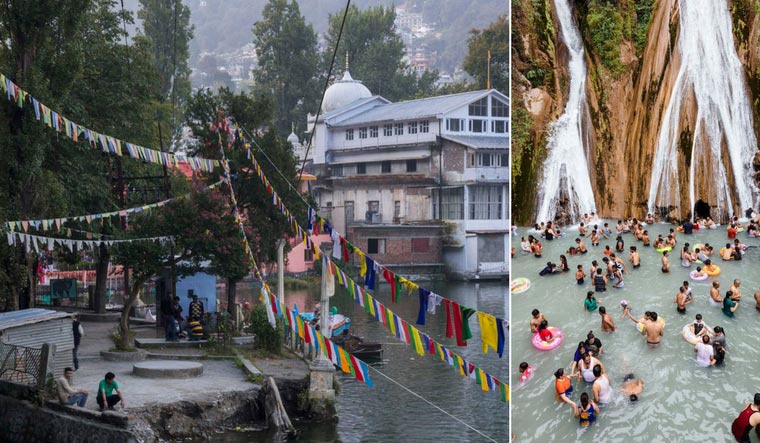 It is that time of the year when sun-baked plains-people, cracked and dry from the sweltering heat, are plotting to scurry off to the hills. Those from Delhi and adjoining cities decamp to hill stations in and around Shimla, Mussoorie, Lansdowne and Manali—the eternal sentinels of pine trees and gentle weather.

But our obsession with summer getaways comes at a price—a price borne by water-deprived locals struggling with shifting demands, even as a booming tourist economy refuses to buckle down on mindless construction. The inevitability of an acute water crisis in the lower Himalayas of India and Nepal is laid out bare in the ongoing photography exhibition Pani-Pahar: Waters of the Himalayas at the India Habitat Centre in New Delhi.

British photojournalist Toby Smith, who is currently artist-in-residence at the University of Cambridge Conservation Research Institute, has translated a research project into a hard-hitting photography exhibition which covers the hill towns of Palampur, Rajgarh, Mussoorie, Nainital in India, and Dhulikhel and Bidur in Nepal, to highlight water shortage and management in the Himalayan foothills. Late 19th century images taken by British photographer Samuel Bourne are set against photos taken by Smith last year to bring home the extent of urban degradation and pressure on land-use in these so called "hillside havens". In one panel one can see sparse 1,880 images of water carriers from the Fullerton Collection; the Library and Bandstand in Shimla from 1890 and a rather deserted-looking Himalayan Club in Mussoorie from the colonel Hume collection. These are played against contemporary images of the same locations and the contrast is all too visceral.

How the varied towns and settlements along the Indian Himalayas satiate their water needs from natural and human-engineered systems are also brought to the fore. For instance, there is a beautiful image of the Shimla Forest Reserve, the main source of potable water along with unsophisticated filtration tanks which use coarse sand to remove unwanted matter before it can go through a pipeline to Bidur. Two engineers are seen tinkering with machines in a rusting, British-era pumping station which is still effective, and serving its purpose by using natural ground sediment as filter.

For a dose of reality on how hillside communities struggle to meet their daily water needs in high-season and the ways in which they adapt to use and manage water from existing sources, head to Pani-Pahar before booking a Volvo for Manali this summer.

Pani-Pahar is on view at the India Habitat Centre and Jor Bagh Metro Station till June 29 .