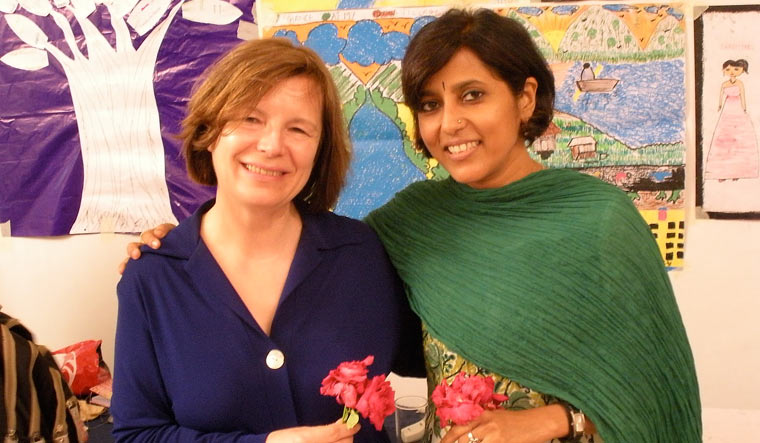 With the growing threat of terrorism-linked radicalisation across countries, an international NGO has initiated a campaign across Europe and other countries to involve mothers and women as the first line of defence against the rise of extremist ideologies that often are bred in the community.

SAVE (Sisters Against Violent Extremism)—said to be the world's first female counter-terrorism platform—is providing the missing link between women at the community level, where radicalism is propagated, and decision-making levels where strategies to counter violent extremism are shaped.

Edit Schlaffer, a social scientist, writer and activist (who founded Women without Borders, an international research-based NGO headquartered in Vienna in 2002) launched SAVE in 2008—and has been encouraging women to take the lead in their personal and public lives.

"SAVE sends a strong message around the world that civil society can and should be the first line of defence against violent extremist ideologies. In this way, SAVE raises awareness for the potential of women to contribute to new avenues to peace," noted Schlaffer, founder and executive director of SAVE, who has been named as the "European of the Year-2018" by international magazine Readers' Digest.

SAVE has developed the "Mothers School Model" to empower women to take an active role in safeguarding their families against the threat of violent extremism.

"The Mothers School curriculum and workshops offer concerned mothers training in personal, communication and parenting skills so they can recognise and react to early warning signs of possible radicalisation in their children. Mothers learn to provide counter-narratives and offer alternatives that foster positive youth development and resilience," the Women without Borders website states.

This innovative approach to security provides mothers the skills and the tools for prevention and intervention right where they have the best access for action in their homes and communities.

"Including women in the security arena is a great challenge, but times of crisis are also often times of opportunity. This is our moment as women to exercise our smart power and meet global challenges with competence and confidence," said Schlaffer, who holds a PhD from the University of Vienna.

The Mothers School pilot was launched in Kujand, Tajikistan, in February 2013.

"After the introduction to the Mothers School programme, the immediate response was very positive; all participants found the workshops very powerful and that the Mothers School concept was very timely. The first survey revealed that mothers were concerned about the spread of Islamic radicalisation and gave examples of events and anecdotes from their own experience," the website stated.

The Mothers School project is also being carried out in Kashmir, Zanzibar, Nigeria, Pakistan and Indonesia.

The Mothers School Model will now be implemented in Europe to address the ongoing foreign fighter phenomenon.

The Archduchess of Austria and Princess of Tuscany Camilla Habsburg-Lothringen, who was at the Crans Montana Forum conference in Morocco, told IANS: "Women without Borders/SAVE and Dr Schlaffer are doing a good job in this field (of countering radicalisation) which needs immediate global attention."

Schlaffer has received numerous accolades for her work promoting women in the security arena. Former United States Secretary of State Hillary Clinton has twice highlighted SAVE's contributions to the field.