A case for churros con choco with coffee for breakfast 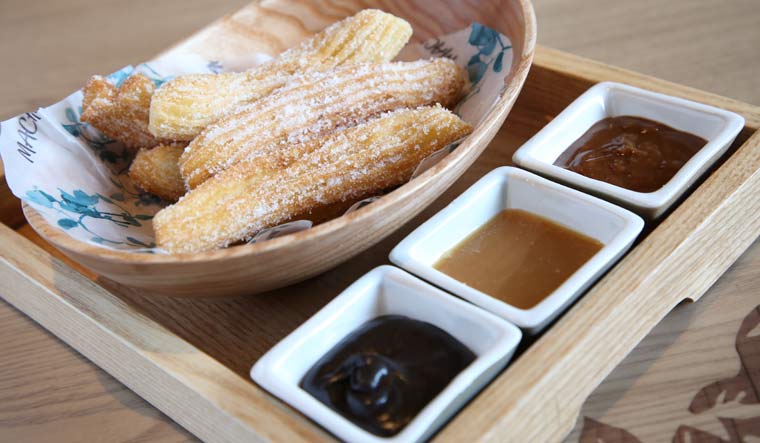 Machan, Delhi's vintage 24x7 jungle-themed restaurant and cafe at the Taj Mahal Hotel, reopened this month after its third ever renovation since it began life in 1978. The year-long extensive renovations have discarded the easy, uncomplicated giveaways of protruding tusks and antlers with images of hunting scenes and leopards. The restaurant is more elegantly and subtly forest-wild. In the dense leafage of the wallpapers, the tiger is always watching even though the patrons may not spot it. Old favourites like Chicken Montecarlo and Bull’s Eye seamlessly coexist with new entries in the menu like Ocean Turns Purple and Lamb Agnolotti. But if there's one crackling idea which comes out a winner, it's the old and new duet played at the end of the meal: Machan's classic Kona Coffee with the delicately crunchy Churros, a breakfast favourite in Spain.

"The concept we were exploring began by looking at the world's best breakfast dishes which we could include in the new menu," says sous chef Siddhartha Saharoy at the hotel. "South Indian breakfast, including idli and filter coffee, is appreciated around the world. We wanted to recreate similarly resonant global breakfast staples. And Churros with coffee is a great idea and relatively under-explored in India," says Saharoy.

This ancient fried dough pastry has sketchy origins, with China, Spain and Portugal as equal claimants. One theory attributes the invention to Spanish shepherds."High up in the mountains freshly baked goods were not available. So the shepherds came up with a cylindrical daily staple, which could easily be fried in a pan over an open fire. They named the fritter after Navajo-Churro sheep, as the horns of these sheep look similar to the fried pastry," writes Ira de Reuver in Roads and Kingdoms. But they were most definitely introduced in South America during the Spanish Inquisition in the 16th century. It was around this time that the Spaniards returned to Europe with cacao which they began to sweeten with sugarcane. The tradition of dipping churros in chocolate still hasn't been tampered with.

The tubular fritters speckled with cinnamon sugar is a popular walk-around snack around the world. There are multiple Churros-only outlets in Indian metros today, including The Bombay Churros and Chocolateria San Churro in Delhi. For the breakfast lovers divided between camps of sweet and savoury, one may wonder why eating fried white flour soaked in sugar first thing in the morning is a great energy booster. "Don't forget we also love our jalebis for breakfast. In fact, I feel we may have copied some version of churros to make jalebis," jokes Saharoy, who stands by the classic combination of Churros served alongside caramel and chocolate sauce, undercut with a pot of black coffee. But dishing out golden brown churros con chocois not exactly a cakewalk, using just flour, water and sugar in the mix. Cooked right it is warm, soft and crunchy dusted with snowy flecks of sugar. Here, Saharoy shares the recipe of the cylindrical sweet as it is prepared in Machan.

For the coating, whisk together sugar and cinnamon in a shallow dish and set it aside. Add water, butter, sugar and salt to a large saucepan, bring to a boil over a medium-high heat. Add flour, reduce heat to a medium-low and cook and stir continuously with a rubber spatula until the mixture comes together and is smooth. Add egg to the flour mixture, then blend immediately with an electric pedal and add eggs one by one for a smoother mixture. Transfer to a piping bag and carefully pipe the mixture into the preheated oil. After its fried, transfer to paper towels to dry and soak extra oil. Later, coat with cinnamon sugar mixture kept aside. Serve hot with chocolate sauce and coffee.