'Whose is the loudest?': Meet the man behind India's 1st farting contest

Yatin is considering taking it to other cities in the country 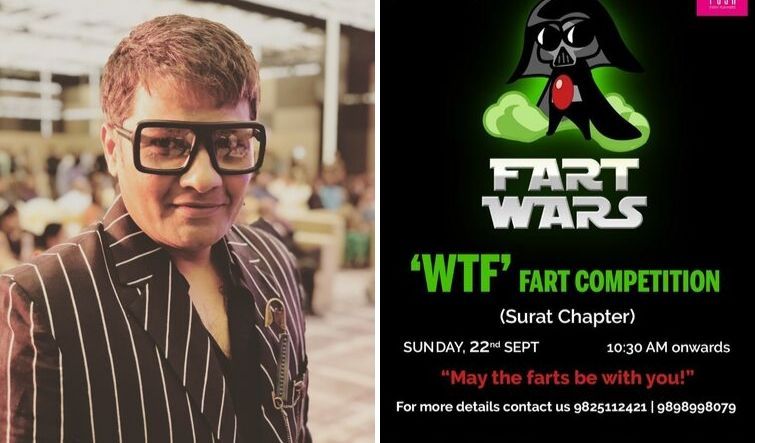 If there is one bodily function that faces constant humiliation, it is the 'fart' or 'flatulence', however you would like to call it. It is high time that this seemingly harmless act be delivered from disgrace, and so be it—in a first-of-its-kind in the country, a 'fart competition' is going to be held in Surat, Gujarat, on Sunday.

The competition, the brainchild of Yatin Sangoi, a singer went viral soon after it was first announced a few weeks back. The response, in fact, has been so huge that Yatin is considering taking it to other cities. “People are frowned upon or shamed when they fart in public. This event will give them a free stage to fart without any inhibitions. I think this will break the ice,” he said.

For Yatin, this stems from a personal experience some time ago. “I was watching a film with my family when I farted. All of them laughed, and someone said if there was a competition for farting, I would have won it,” he said. Yatin, who dismissed it as a casual joke then, later thought it would be a path-breaking idea to pull off in India. He took the idea forward, along with his friend Mul Sanghvi. 'What the Fart', set to be held in a banquet hall in Surat, has received close to 200 applications from across the country so far. “I even got a call from a guy based in Dubai that he will be flying down for this event,” says Yatin who is surprised by the overwhelming response.

Even if the idea may seem far too silly for many, Yatin and his team are giving it their best shot. The 'power-puffs' will be awarded in three categories—the loudest, the longest and the most musical! Each participant will be given 60 seconds to show off their talent to three judges—RJ Devang Raval, Dr Pranav Pacchigar and Kavita Parmar, who was a finalist in the Mrs India Worldwide 2018.

If you are wondering how on earth these categories will be judged, it is backed by technology. After the event was announced, Satish Nair of Netsol, a company that provides engineering solutions, got in touch with the team. “They have developed a setup which will be placed on stage where the contestants will 'perform'. "The devices will generate waveforms that will help us detect the loudest.” For the longest, the one who can the fart the most in 60 seconds will take the trophy. Judging the most melodic will be the one where the judges will have to use their creative skills.

With sponsors pouring in for the innovative event, each winner will get a cash prize of Rs 5,000 and gift vouchers worth another Rs 5,000.

Yatin has a few tips for his participants on how to deliver well when the moment is upon you—include radish, chana, beans and even hajmola tablets in your diet, albeit within a limit.