Inside the Lime-O: An ‘automated’ lime juice vending machine 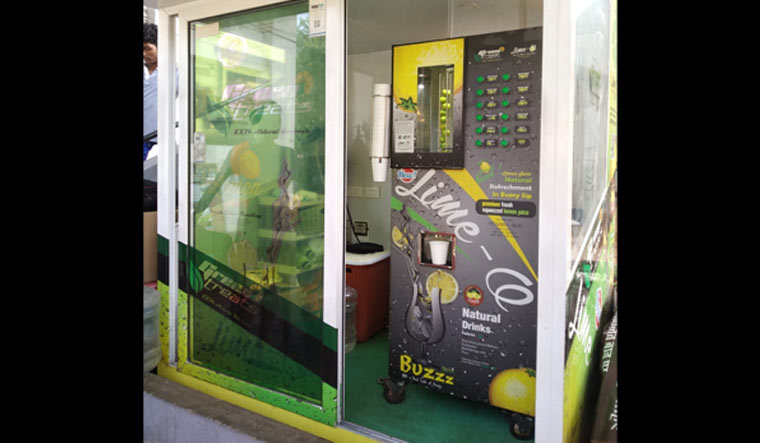 There is nothing more tempting than a glass of chilled lime juice during the Indian summer. So powerful is its allure that when a reporter asked PepsiCo CEO Indira Nooyi what she felt her greatest competitor was, Nooyi replied “The Nimbuwalas!”

This competitor has since been given an upgrade. The Nimbuwala of the future is an automated vending machine named “Lime-O” — able to churn out fresh and clean glasses of freshly-squeezed juice for Rs 20 a pop, as well as hot cups of Suleimani Tea.

And in case you are worried that such machines will steal jobs from the Nimbuwalas — think again! The machines come with an operator, who will collect your money, tap some buttons on the machine, and fetch you your glass of cool nimbu paani.

The reason behind the operator is because the machine’s designer, Joy M., was adamant that whatever he or his company did, it should create jobs for the people.

The company, Green Treat Machines Pvt. Ltd., claims this is the first indigenous lime-juice vending machine in the country. It was the brainchild of one designer and four mechanical engineers, who got together in their final year of college to turn a novel idea — any idea — to reality.

25 years back, designer Joy got together with Jolly, Isahach, Rajesh and Sajan of the TKM Engineering college in Kollam, Kerala, to launch a venture named Green, producing what they claimed was Kerala’s first Automated Screen Printing Machine. The product proved a success, and they decided to follow up with something even bigger.

Describing the meeting of minds, Joy says there was a long silence after they realised they had nothing besides a “Water Jet Machine” that could cut hard materials. The silence was broken when Jolly, one of the engineers, asked where he could get a fresh and hygienic lime juice. The idea of Lime-O was born.

The company claims “Lime-O” is the first indigenous lime juice vending machine — and their website says it is patented. This machine is designed for durable, efficient, fault-free continuous operation. The company says it is “ideal for malls, department stores, restaurants and clubs”.

One kiosk with a lime juice vending machine is present at Rajiv Gandhi Indoor Stadium, Kadavanthra, Kochi. Another is located in the Oberon Mall in the same city. Kevin, the operator, connected THE WEEK with Joy, who was designing glass artefacts at a glass studio in Eroor.

The food-grade stainless steel inside the squeezer and mixer units assure hygienic lemon juice, according to the company. The entire process including lime selection, squeezing and extraction are automatic. Programmable Logic Control(PLC) determined the sequence and process according to the user’s selection.

The customer can choose twelve varieties of Lime Juice at an affordable rate of twenty bucks. The best seller is Sugar-Salt-Soda, while the elderly apparently prefer the Sulaimani tea!.