My music doesn't even get airplay in India: Nucleya 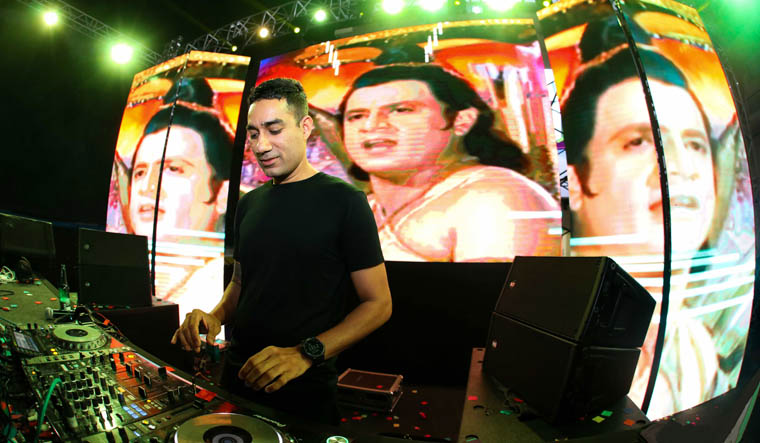 Udyan Sagar, popularly known as Nucleya, is the most recognisable face of the homegrown electronic music industry. Pundits have credited him with single-handedly pioneering a music genre, 'desi bass', after the 90s wave of Asian Underground—represented by the likes of Asian Dub Foundation, Talvin Singh, Bally Sagoo, MIDIval Punditz and Karsh Kale—somewhat receded. While the frontrunners of Asian Underground were mostly Indian-origin musicians from the UK, desi bass is rooted in the country and combines computer-generated dance music synths with lesser-known Indian tunes and instruments. Nucleya's 2015 album Bass Rani best exemplifies this.

Very few Indian musicians in the alternative space have as big a following as Nucleya, and the BBC Asian Network has rightly tapped on to his popularity. Nucleya has, from May 20, begun hosting a two-hour radio show on the network, which, according to the former's team, reaches over 660,000 listeners a week in the UK. The Agra-born, Ahmedabad-raised music sensation is the first Indian producer, who is not British Indian, to have his own show on the BBC Asian Network. The show intends to raise the roof with innovative sounds from young Indian producers around the world. In an interview with THE WEEK, Nucleya talks about his radio-hosting chops, how he wants to make it more distinctive, and what Indian radio is missing out on.

How does it feel to host your own BBC radio show? What have been some of the highs and lows of broadcasting music in this format?

What I have understood so far is that I have the liberty to play anything on this show. I have complete freedom to talk about what I want to. It is quite unlike other shows which are scripted, and the playlist has already been chosen for you. Nucleya on the BBC Asian Network is definitely not like that. In that sense, it is similar to what I did on The Remix, the reality music show on Amazon Prime, where nothing was scripted and I could say whatever I wanted. Here, I do have some help in terms of what I should say, because my English is poor. But I do talk about whatever I want to. The show is amazing because a lot of people who feel that Indian music revolves around classical music or fusion will get to hear a lot of the cool, new stuff coming out of India. The aim behind the show is to showcase the new India.

What are some of the ways in which you plan to make the most of your sessions as the radio host of a music show? Or play around with new ideas or develop a personal style? Are you inspired by other music producers on radio?

I am definitely inspired by radio personalities like Bobby Friction, who hosts his own show on the BBC Asian Network. He has been doing this for 20 years. I am not trained in radio broadcast so I do not want to become the best. But I do want to showcase what I think is the cool music coming out of India. I want to have a segment on my show where I want to talk to cool, creative people in India like Anurag Kashyap, who can speak about his films, and how he approaches music in his films. Right now, my album is taking up a lot of my time, and once I start travelling again, it will become easier to meet people on the go.

Would you call ‘desi bass’ the equivalent of Indian EDM?

My manager might be the best person to answer this question! Desi bass is not my favourite term to describe what I do, but it is a label that has stuck because it has given me a unique identity. It helps people understand that Nucleya makes this sort of music. This is a problem I face because I don’t make EDM, and I don’t just make bass music. I make all different kinds of music… it revolves around dance music sounds, but it is not restricted to a particular genre. I play around with a lot of different genres and sounds, and it becomes difficult to slot it in one box.

What according to you is the general perception of Indian alternative music in the West and how do you plan to change that with your show?

I feel that a lot of people who don’t live in India, and I’m not just talking about the NRIs, get to see only classical, folk, or fusion music, or performances around Navratri/Diwali time. Perhaps that’s the sort of exposure NRIs and non-Indians get in the name of Indian music. When they come to India, they see that the reality is quite different. There are so many artists and songs on my show that don’t sound Indian, but they are being made by Indian producers. On the show, not only do I play the song, but I also talk about the artist—where are they from, what kind of music they make. Example, Dualist Inquiry has just released an amazing tune called You & Me, his collaboration with Sanchal Malhar. In my next show, I want to talk about them, the song, how they approach music, and their tastes. This will help the audience know more about India, beyond their impressions and perceptions.

Indian electronica is often simplified into Bollypop/Indi-pop. How much of that is true and how is it changing?

What’s happening right now is that there is a stream of music that’s not affiliated with film music, and not just in the electronic space. It needs no support from the mainstream. There is a by-product of film music, like remixes and covers, and shows like The Remix. It is indirectly related to film music. Everything co-exists, but what is really exciting for me is the non-film music, where people are experimenting more. Because I make all kinds of music, and I play everywhere… I have realised that younger audiences are more inclined towards non-film stuff. The more experimentation you do, the more they like it.

Why don’t Indian radio stations (private and public) play alternative/indie music since there is so much good stuff out there? When will that change?

I don’t think it’s ever going to happen, honestly. The royalty system is f**ked, the PRS system is f**ked, the film industry is f**ked and the way radio stations work is also f**ked. It’s a cycle and it feeds into each other. Every time I am interviewed on a mainstream radio station, the RJ will say, “Bro! I am such a big fan of yours and I love your music.” And I ask them why they only play my film stuff? They don’t have an answer for this. Their bosses won’t allow them to play independent music. If radio will not support musicians, who will? I am considered to be the face of electronic dance music, but my music doesn’t even get airplay in India! I have a radio show on a station in the UK. I wish Indian radio could look around them and see what they are missing out on. I don’t see this changing in the future, either.