How a virtual-reality “game” is helping neuro-divergent

The idea for VHAB came from James Cameron's Avatar 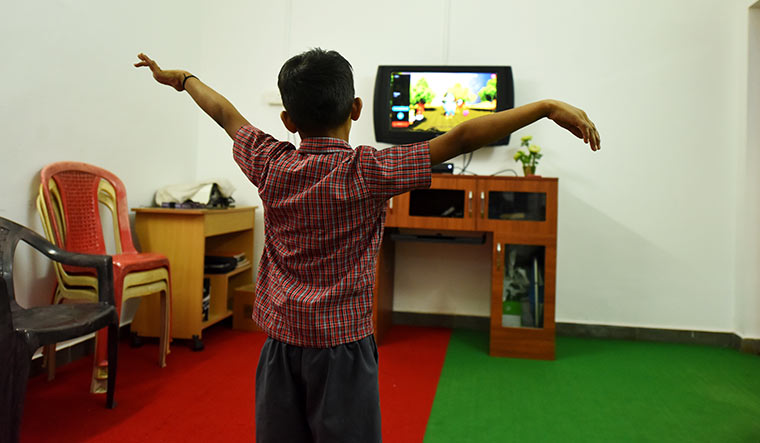 Devesh S. often makes exaggerated and abrupt moves while trying to walk. The seven-year-old has athetoid cerebral palsy, a condition caused by abnormal brain development or damage when it is being formed. Devesh has trouble talking, understanding, learning and even walking straight. When he is in the VHAB (virtual habilitation) “game”, though, the boy forgets these struggles. Created by TCS Rapid Labs, VHAB is a digital-assistive tool that combines virtual reality with gesture analysis.

A typical school day for Devesh starts with a physiotherapist-assisted session in front of VHAB. His eyes fixed on a screen—which puts him as an avatar in a virtual world—Devesh does some “simple” moves to pass the initial levels of the games. As he advances, he will face challenges like “kicking coloured balls”, “touching the flares”, “moving with a cart and collecting flowers”, “walking on a line” and “stepping on to a dance floor”.

“Devesh started VHAB games just three months ago, but the change that happened in him is amazing,” says Ambili Francis, a physiotherapist at the Adarsh Rehabilitation Centre (ARC) in Kochi, where Devesh studies. “The frequency of his falls decreased. He has become confident enough to complete complex operations that require good hand-leg coordination. He was impatient in the initial days; he used to be upset over small delays between two levels of the game. But he is more patient now; he pays attention to the instructions.”

Cerebral palsy is the most common motor disability among children. In India, three out of 1,000 children have it. Another neuro-developmental issue that hinders children's learning is autism spectrum disorder. “To retain a degree of independence and control, children with autism and cerebral palsy require regular physiotherapy sessions,” says Robin Tommy, who heads TCS Rapid Labs. “When a neurodivergent child is undergoing physiotherapy, he has to go through a lot of pain. Your brain would always try to reject pain. So, these children often do not want to come to therapy; they just want to be in bed. But the problem is that the more they are in bed, the stiffer their muscles get. So, therapy is a must. We as innovators thought about what we can do to change how physiotherapy is delivered to children. The result was VHAB.”

Francis notes more enthusiasm from children for therapy sessions using VHAB. “Now they keep asking us when their turn will come,” she says. “Once they started VHAB sessions, their cognitive skills also improved. Many of them became more attentive in classroom sessions.” 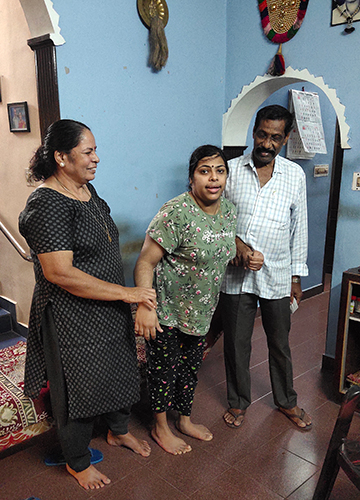 Step by step: Durga, one of the first students at Adarsh, with her parents.

Tommy, a movie buff, says the idea for VHAB came from James Cameron's Avatar. “In the physical world, the child may be facing a lot of constraints. But, just like in the movie, he feels more power in the virtual world,” he says. “For the child, it is a game with points and levels. But, by moving his body parts, he is undergoing a therapy session.”

Tommy says the aim is also to retrain the brain of neurodivergent children. “The neurogenesis (forming of new neurons) and neuro-plasticity (a process by which the brain rewires to perform new functions) of their brain are enabled so that they will be able to do things they earlier could not. Also, the system knows to what extent a person can [stretch himself]. It is based on this that the system loads the games for each person.”

Adarsh, which began in 1998 as a day care for seven differently-abled children, now trains and rehabilitates more than 500 children with special needs. It provides a range of developmental solutions, including speech therapy, vocational training and several therapeutic activities. Durga, who was a premature baby and had cerebral palsy, was one of the earlier admissions.

Her mother, Radha Mohan, says that Durga, 28, developed the confidence to climb stairs and try backwards motion after training on VHAB. “Earlier, if she had to turn around from a position, we had to help her,” she says. “But, if she had to earn points in the games, she had to turn around by herself. During the games, she started slowly moving her legs backwards. She uses crutches even now, but she has become more stable.” Durga is now part of the Adarsh Centre of Empowerment, a vocational training school and rehab centre for those above 18. 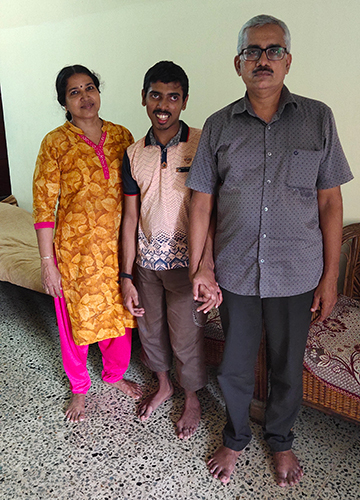 Better every day: Nirmal Krishnan, who has cerebral palsy, has shown great improvement after undergoing VHAB sessions. Here, with his parents.

It was in 2017 that ARC first used VHAB, for six students. Nirmal Krishnan, now 24, was part of that batch. “Earlier, my son required my support for everything,” says Manju S., his mother. “I had to be available for him even at school. He required my support even to stand up. But, after starting VHAB sessions, he developed confidence. He stands without support in front of the VHAB screen. In that therapy room, he is empowered. He understands his powers.”

Nirmal, who has cerebral palsy, has movement troubles and impaired hand-eye coordination. “He could not even feed himself because of tremors; his mother used to feed him at school,” says Tommy. “She wanted him to be independent and self-sufficient. Parents of special children worry about a future where they won't be available to help. VHAB and our other assistive technologies are aimed at making neurodivergent individuals independent. Once VHAB was introduced, the children became more confident and independent, and the parents—especially mothers—could go to work.”

Tommy is currently mentoring a Kerala-based startup called Punarjeeva Technology Solutions, which is researching game therapy for physical rehabilitation. Two of their tools—Hasth, a gamified system based on hand-tracking that improves fine motor movements; and Samatved, a gamified environment that offers balancing exercises—have shown promise in several cases, including in Nirmal's.

Dr Sasikumar Panicker, founder of Kumar Centre for Stroke and Neuro Rehabilitation, Kochi, uses both Hasth and Samatved at his clinic to help a wide range of patients, including those who had a stroke or have multiple sclerosis, cerebral palsy or brain injuries. “Depending on the areas affected in the brain because of a stroke, the kind of weakness that occurs may differ,” says Panicker. “For instance, if the stroke is in the pons region or the cerebellum, it will impact balance. So, these patients need Samatved-based therapy. As it is like a game, people are interested. Samatved has a platform—a balancing board—with a pivot. When a patient stands on the platform, it becomes mobile. Each vibration and movement happening at the foot level is captured by a sensor, and the data goes to the computer and is fed into a game. The most common is a football game, which has different levels of difficulty. As for Hasth, there is a sensor to capture the hand movements of a patient. The collected data is transferred to a ball-catching game. The game creates a movement for the patient’s hands. It may not work for a completely paralysed patient, but is effective for those who have some level of movement.”

Punarjeeva's other platforms include Trana, which primarily improves gross motor abilities of the limbs; Sahay, which provides speech and cognitive training, and helps with limb movement; and Parigyan, which imparts IT skills to the specially abled. All these rely on brain plasticity. “We use only a small section of our brain,” says Panicker. “A lot of neurons are dormant. In the case of a stroke or cerebral palsy, a section of neurons is damaged. But when we stimulate [neurons] with constant practise, it creates new engrams (memory trace) in the brain, which leads to new neural pathways. Through these new pathways, a patient will gain more ability and more strength. So, the idea is to awaken the dormant neurons via stimulation.”

Tommy says that his team's creations have already helped more than 5,000 neurodivergent Indians. “More than 12,000 others are also beneficiaries of the help that these individuals are receiving,” he says. “These are the parents, guardians and siblings of these beautiful human beings. When a person with cerebral palsy or autism or Down syndrome is empowered, a family is empowered. We are also developing applications to make neurodivergent individuals employable. A lot of them have qualities desirable to employers, such as intelligence, attention to detail and high level of commitment. But still, they are not employed because our workplaces are not inclusive. So we started a not-for-profit organisation, Inclusys, to recruit, train and upskill neurodivergent individuals with IT skills like data annotation and data entry. We are also launching a startup as part of Inclusys that will employ 75 neurodivergent individuals soon. Nirmal will be one of them.”