Play and learn: The Thampu team performs a play on maternal health for the tribals of Attappady | Vibi Job

It was a bumpy ride made jerkier by sharp turns and goatherds. The houses en route looked half-finished—some had clay roof tiles, some others concrete, and some were naked on top. The narrow road running parallel to the Siruvani river took us to Kottamala Ooru, a hamlet in the tribal-dominated Attappady region of Kerala. We were there to meet Geethu Dhanush, who had a miscarriage some weeks earlier.

The house on a small hillock had goats, dogs and puppies as guards. Geethu, 21, came out with her 18-month-old daughter, Dhanshika, in her arms. Year 2022 had been cruel to her—she lost her husband, Dhanush, in a bike accident in February, before losing her unborn child.

On June 28, she had gone to the Vivekananda Medical Mission Hospital, a private facility in Agali, for her second-trimester anomaly scan. There was no foetal movement. From there, she went to the government tribal speciality hospital in Kottathara the same day. It was created exclusively for the welfare of the area's tribals, but it is ill-equipped and short-staffed. At around 2:15pm, the assistant surgeon there suggested abortion and referred Geethu to the Government Women and Children Hospital in Palakkad—more than 90km from her home. Geethu and her mother took an ambulance there, but the abortion happened only the following day. The scan report said that Geethu was borderline anaemic (10.4 g/dL; 12-16 g/dL is the normal haemoglobin range for women). She was anaemic when she was carrying Dhanshika, too. The child was born pre-term and weighed just 1.9kg.

The Palakkad hospital authorities told Geethu that the baby had died because the umbilical cord was tied around its neck. She did not ask for a post-mortem, and the aborted foetus was buried in Palakkad.

Geethu’s miscarriage is not a one-off; it has to be seen in the backdrop of the larger infant mortality problem in Attappady. The area has a tribal population of 33,000; Irula, Muduga and Kurumba are the three main communities there. According to the O.R. Kelu Committee report submitted to the Kerala assembly on March 15, 80 per cent of the tribal population is either malnourished or has sickle cell anaemia (a genetic disease).

It was in 2013 that Attapaddy's infant mortality rate first attracted national attention. That year alone, 47 infants died in the block. Thampu, a tribal welfare NGO, had studied and highlighted the issue then, shocking the nation and setting off alarm bells in the corridors of power.

In 2015, Thampu released another study about malnourishment in Attappady. It was based on children (below six) and mothers from 42 hamlets in Attappady. Every child part of the study had stunted growth because of malnourishment. A lot of children had mental disabilities, too.

Post-2013, the Centre and the state spent more than Rs250 crore on tribal welfare in the region. A lot of fancy projects were also announced. However, there have been questions on whether these were only on paper. For instance, in some cases, benefits of the Janani Janma Raksha scheme (2013)—started to help mothers-to-be with money and nutritious food—reached only after the child had died.

Geethu T.K., a 22-year-old from Veettiyoor, lost her three-day-old baby on November 26. Her mother-in-law, Selvi K. (43), said they got the money only after the death became a controversy. “After we lost our child, they came with a sum of Rs11,500,” she said. “What use is it if we do not get the money at the right time? This has happened not just in our case.”

Selvi had snapped at the politicians who visited after her grandchild’s death. “They come with all these empty promises,” she said. “But the adivasis will always have to stand in this graveyard.”

According to official records, 114 child mortality cases were reported in Attappady between 2013 and 2021 (October). Activists from the region say that the real number could be higher. Also, this number does not cover miscarriages, stillbirths or abortions. Twenty abortions were reported in the area in 2020. 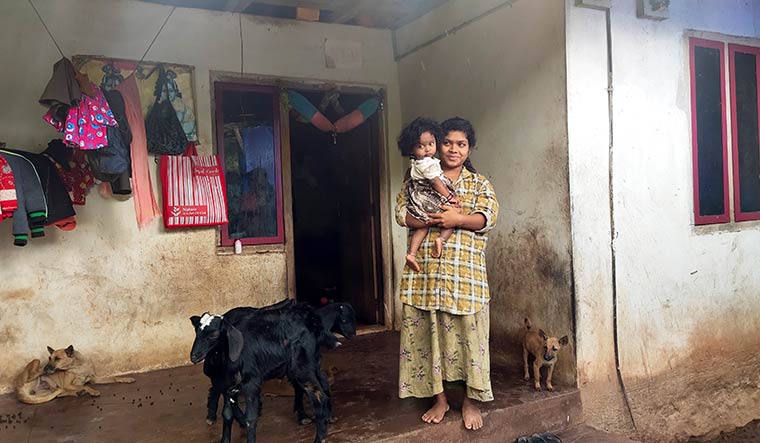 Life goes on: Geethu Dhanush, who recently had a miscarriage, with her daughter, Dhanshika | Nirmal Jovial

Kerala boasts major advancements in health care; at the state level, infant mortality rate is just six (per 1,000 live births), as per the Sample Registration System (SRS) bulletin, 2020. This is comparable to several developed countries in the west. However, Attappady has been left out of this development story. Experts feel that the top-down approach in the implementation projects has failed to produce intended results.

V.K. Suresh Kumar, project officer at the Integrated Tribal Development Project (ITDP) office, said that for the implementation of any project, the beneficiaries also have to cooperate. “[Under the] Janani Janma Raksha scheme, we pay a monthly sum of Rs2,000 from the third month of the pregnancy till the baby turns one,” he said. “However, what happens is that the tribal women will not reveal that they are pregnant for up to even six months because of certain superstitions. Then how can the junior health inspector or junior public health nurse identify the case and report it to us?”

Kumar added that, currently, around 650 women are supported via the JJR scheme. “I agree that sometimes there are delays in getting the funds for the project and in releasing them,” he said. “However, we ensure that there is no delay on our part.”

To spread awareness about government schemes and projects, the ITDP and the state health department have joined hands with tribal welfare NGOs like Thampu.

Activist Rajendra Prasad founded Thampu in the late 1990s, when he had come to Attappady to shoot a 30-minute documentary film. In the past two decades, Thampu has introduced several programmes for the uplift of the tribal community. “Our intention was to create leaders from the tribal community itself,” said Prasad. “Our activists, who are all tribals, toured villages in Attappady with Nammtthu Kanavu, a play in the Irula language supported by UNICEF, to spread awareness and create dialogue about ways to prevent infant mortality.”

Over 39 days, the Thampu team toured 114 villages with their play. The final performance was on Independence Day.

To see the team in action, THE WEEK travelled with Thampu’s theatre group to Bhoothivazhy village. Directed by Kuppuswamy Maruthan, the first Irula with a theatre degree, the play uses motifs and characters from tribal mythology to talk about health care during pregnancy.

Prasad noted that the tribals of Attappady used to have an efficient system to support childbirth. “But now, things have changed,” he said. “We have observed that many pregnant women are not going for consultation in time. That is when we decided to develop this script to talk to our people and make them aware of the issues.”

Attappady has a rich culture of tribal dramas called “koothu”. Maruthan’s play takes inspiration from Harischandran Koothu, a popular play in the region. The lead roles in the play were handled by a couple—Udaya Kumar and Revathy K.—who themselves lost a child in 2014. “In the play, we talk about how to take care of your woman when she is pregnant,” says Kumar. “When Revathy was pregnant the second time, I took good care of her and gave her nutritious food. And, so, we could save our second child.” 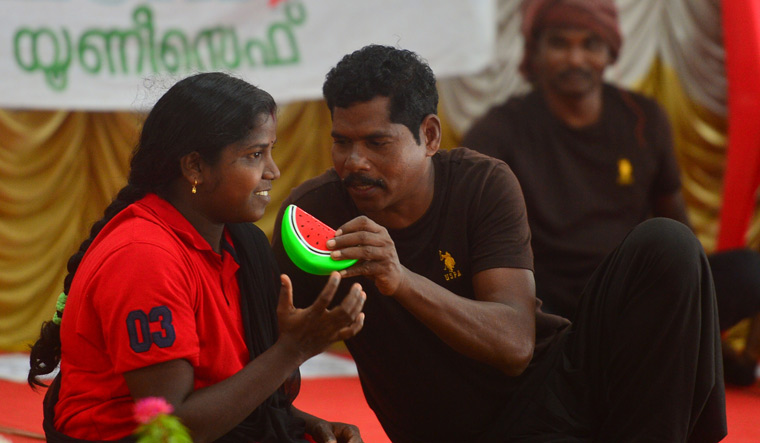 Nammtthu Kanavu means “our dream” in the Irula language. “In the play, a komaali (joker) has a recurring dream about a healthy generation of tribals,” said Maruthan. “Initially, no one understands his dream. But the community soon realises the importance of his dream and starts implementing the necessary changes to ensure a healthy future generation.”

The joker's dream, though, is likely to remain a dream if the government continues to dictate terms to adivasis, said Maruthan. “We are really worried for the health of our generation,” he said. “We are wary of the [nutritional] content of the food that we eat. Our food system always depended on millets. But now the tribals do not have land for farming. And, instead of making the tribals self-sufficient, what the government has done is create community kitchens. What is served there is not in tune with our traditional food habits. Plus, tribals have to stand in queue like beggars every day for food. Now, a lot of people have even forgotten how to cook. These sort of ideas from the government are not helping us.”

Dalit activist Sunny M. Kapicadu led a team of researchers, doctors and activists—under the banner of Dalit Samudaya Munnani—to study the recent rise in infant deaths in Attappady. He found that many of the projects did not take into consideration the needs of the tribals. “So, it will either be a big failure or they will have to stop it halfway,” he says. “In the case of community kitchens, we found that the government is not regularly giving money in advance to run these kitchens. The members of Ooru Sabhas (village governing bodies) are getting the provisions at personal risk from shopkeepers as the government will not pay money in advance. The funds are allocated to them only later. Also, the government has allocated just 018-020 a day for each person. Do you think people would get nutritional value from that food?”

K.A. Ramu, a tribal activist part of the Thampu team, said that the ill health in Attappady has a direct link to the destruction of the adivasi culture linked to farming and agriculture. Each village in Attappady has a hierarchical power structure. The Ooru Mooppan is the head of the hamlet. He has two assistants: Karuthala, the minister, and Vandari, the treasurer. There is also a Mannookaaran, who is responsible for agricultural activities. Nowadays, though, there are complaints from the villages that the government is bypassing the traditional hierarchy by communicating only via a Scheduled Tribe promotor while implementing projects. “We were self-sufficient, and we had to rely on the outside world only for salt and dried fish,” said Ramu. “But now that situation has changed. And every issue we face now—social, economic and health-related—arises from alienation.”

In the 1961 census, tribals made up 63 per cent of Attapaddy's population. However, in the next three decades, state-supported migration policies changed that. By 1991, the tribal population plummeted to below 35 per cent. From the 1960s onwards, a lot of fertile land on the banks of the Bhwani River was snatched by settlers for Rs30 to Rs40 an acre. The tribals were unaware of the market system of the outside world, and could be cheated easily. An official ITDP survey released on February 15, 1977, revealed that 10,106.19 acres of adivasi land in Attappady was taken from them.

According to a study (by researchers Elizabeth Edison and Rugmini Devi) published in South Asia Research in 2019, land alienation in Attappady took place in three forms. Tribals were forced to register their lands—given to settlers for agricultural purposes—in the settlers’ names. A lot of tribals gave their land on lease for meagre sums to meet urgent expenses, and those who could not repay the money lost the land. “The tribals rarely fought legal battles in this regard,” said the study. “Finally, alienation also occurred when the implementation of the Forest Conservation Act of 1980 resulted in unattended land becoming property of the forest department.”

The tribals could no longer use the forest for agriculture or to even collect produce. This destroyed traditional food habits and led to over-dependence on the public distribution system, say activists.

Climate change has also affected the tribals. In the 1950s, around 83 per cent of Attappady had forest cover. Now, it is less than 20 per cent. Earlier, the average temperature was around 17 degrees Celsius; it is now above 22 degrees. This has changed the rain patterns and affected agriculture.

“The gravity of these issues cannot be understood by sitting in AC rooms,” said Manikandan A.D., an economist and author who has done extensive research on Attappady. “The government schemes and projects should be implemented by living and interacting with the tribals. Without taking the tribals into confidence, nothing will work here.”