Activation of the senses is vital for cognitive development 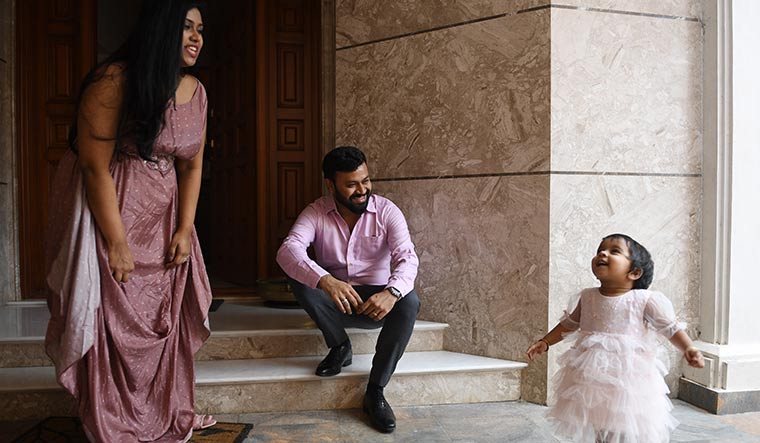 Gianna Fernandes from Bengaluru loves curling up on the sofa with a pop-up book of fluffy puppies. The 18-month-old loves to touch and pet the puppies. “Gianna can easily identify a dog’s breed,” says Albert Fernandes, her dad.

A hands-on parent, Fernandes creates opportunities for his daughter to explore, learn and be heard, instead of letting her watch television all day. Gianna loves animals. Fernandes and his wife, Felicia, show her pictures and create puzzles for her. “She can pull out animal figures and put them back. Each one of those figures makes a particular sound. Gianna can tell what each animal sounds like,’’ says Fernandes. During the day, Felicia and Fernandes make her do brainstorming activities. “In the evening, we make her run and do physical activities so that she gets exhausted and sleeps well at night,” he says.

While most parents know that right nutrition is the key to early brain development, many of them overlook the importance of early stimulation. A growing body of research suggests that early childhood stimulation plays a significant role in a child’s intellectual development. Activation of the senses of vision, hearing, touch, taste and smell is vital to the development of sensory pathways in the brain, which, in turn, promotes cognitive development. “The lovely sting of dad’s one-day-old stubble gives the same secure feeling to a child as the softness of mom’s cuddle,” says Manjusha Sandeep, counselling psychologist and centre head, T.I.M.E Kids preschool, Kochi.

Cognitive development refers to the development of a child’s ability for attending, retrieving, thinking and problem-solving as well as linguistic abilities, says Dr Rajakumari P. Reddy of the National Institute of Mental Health and Neurosciences (NIMHANS), Bengaluru. Research confirms the role of an enriched environment in cognitive development. An ongoing animal study conducted by NIMHANS shows that visual and auditory stimulation and group housing can make mice smarter and more intelligent. “We created an environment that resembles Disney Land. It was found that mice that were given toys and ladders to play with had higher levels of cognitive development than the ones reared in a deprived environment. Enriched mice could even undo the effects of stress,” says Dr Laxmi Rao, professor of neurophysiology at NIMHANS. The mice were also fed on a diet enriched with protein and vitamins. The study shows that stimulation in the environment leads to positive physiological changes in the prefrontal cortex and hippocampus, parts of the brain involved in learning and memory.

As a parent, Dianne Sunny from California made sure her sons, Neil and Noah, had plenty of outdoor play opportunities every day. “Unless they were sick or the weather was bad, we went out to the park, library or the beach,” she says. “Play is the primary form of learning in kids. It helps develop a well-rounded personality,” says the 39-year-old who worked as an elementary school counsellor for a while.

Researchers emphasise the role of play in cognitive development. Play should be least governed by rules. The crux of play is creativity and fun. It should lead to joy and a sense of wellbeing. That is what matters more than the material being used, says M. Thomas Kishore, additional professor and consultant clinical psychologist at NIMHANS.

Sunny would agree. Even mundane things can be used to boost baby brain development, she says. “Our family is heavily into music. When I cook, I would let my kids bang on pots and pans, listen to music or watch dance,” she says. Her 11-year-old elder son Neil, who was tested “gifted”, has written a book which he self-published.

Fret not if your children do not have access to sophisticated gadgets, imported books or boxed material. Let them spend time with nature. Playing with mud and sand provides natural building blocks for brain development.

Look around and be innovative. Any natural material such as twigs, stones, pebbles, empty cans, shells, flowers, bird nests, feathers and bells can be used as tools for brain development. Ordinary materials used in houses can be used as toys. “Make sure the material is non-toxic, safe and appropriate to the developmental age of the child,” says Kishore.

Babies below the age of six months like toys hanging from above that they can look at. They like to play with objects they can grab. Play involves vision and hearing, with the baby adjusting its position to hold the object and examine it. All these activities promote integration of the senses. Muti-sensory information helps form new neuronal connections leading to cognitive development. A seemingly simple play or sensory stimulus can activate the brain in multiple ways. “We use play as a medium to help mothers bond with their babies better. Play helps the child develop communication skills and motor coordination,’’ says Kishore. “Children above six months will look at their caregivers for approval. Depending on their response, they will repeat the task or explore new things. Play instils inquisitiveness in children. It helps them to be independent and socially responsive.” Depending on the need, play activities can vary. Parents should ensure that there are no gender stereotypes playing out, says Kishore. Boys can play with kitchen sets just as girls can operate automobiles.

Play can give a good indication of the intellectual development of the child, the quality of her thinking and reasoning, creativity and emotional maturity. The quality and nature of play can sometimes help clinicians understand whether the child has any development disorder, says Kishore.

Children experience the world through senses and motor ability, initially. For instance, a child may be curious to smell flowers, taste food, listen to sounds and talk to strangers. The curiosity leads to exploration by physical activity such as moving, sitting, standing, walking and running, says Reddy. “Physical mobility leads to increased cell connections within the brain to enhance cognitive ability.” Researchers say that social interaction and language are the main factors in cognitive development. Caregivers and parents looking at children and talking to them can help their brains develop.

The pandemic has added to parenting woes. According to a study conducted by the National Commission for Protection of Child Rights, 23.8 per cent children use smart phones while in bed before going to sleep. How much screen time is too much? “Screen cannot be a play medium,” says Kishore. “That said, don’t dismiss technology. Gadgets improve hand-eye coordination and finger dexterity to a certain extent. But make sure the gaming and screen time do not substitute everything else.”

The American Academy of Child & Adolescent Psychiatry (AACAP) suggests screen time should be minimal for children up to one and a half years. It may be limited to video calls with a family member who is away. “Some parents take pride in the fact that their toddler can browse internet on a laptop or a smart phone and play music or games on their own. It won’t boost brain development. Too much screen time could impact their socio-emotional processing skills,” says Kishore. Children aged 18 months up to two years may be allowed limited screen time with a caregiver. Children aged between two and five years should limit non-educational screen time to one hour per week day and not more than two to three hours per day on weekends.

If your child is a prodigy, parents should nurture the kid's talent. “An average parent might think I’ll give my child an encyclopedia. The child will be exhausted,” warns Kishore.

The most essential aspect of the work with the little child is the inner attitude of the educator, who provides the example for the child’s imitation, says Hetal Shah, teacher at Advaya Shaale School in Bengaluru. “The development of each individual child and of humanity depends on experiences in the first seven years of life,” she says. “An atmosphere of warmth and guidance that promotes joy, wonder and reverence supports such healthy development.”