The reason behind the longer gap between vaccine jabs 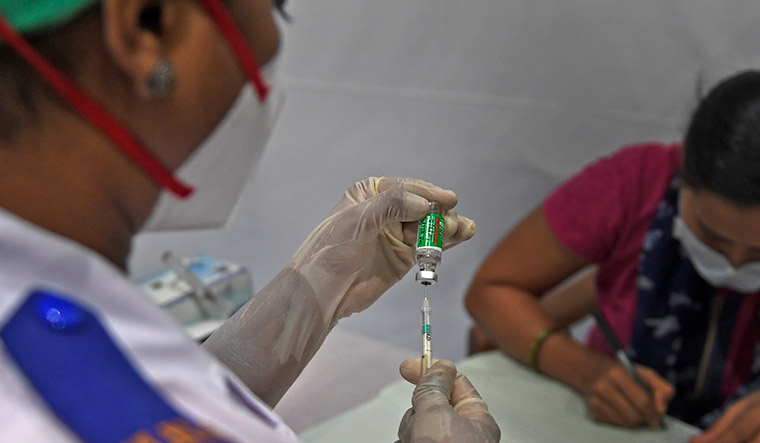 Give a shot: A health worker prepares to administer a dose of vaccine at a centre in Mumbai | Amey Mansabdar

On January 16, the Union health ministry rolled out the countrywide vaccination drive, and Oxford-AstraZeneca's Covishield was administered in two doses with a gap of 28 days. On February 10, an expert panel of the World Health Organization suggested an 8-12 week interval between the two doses. “In light of the observation that two-dose efficacy and immunogenicity increase with a longer inter-dose interval, WHO recommends an interval of 8 to 12 weeks between the doses. If the second dose is inadvertently administered less than four weeks after the first, the dose does not need to be repeated," said the WHO’s strategic advisory group of experts on immunisation.

On February 19, The Lancet published a study that said the efficacy of Covishield's two doses is 81.3 per cent when administered 12 weeks apart, in comparison to an efficacy of 55.1 per cent when administered less than six weeks apart. Yet, the Indian government decided to go ahead with the shorter gap, citing that the scale of India’s vaccination drive had necessitated it. The UK and Canada have expanded the gap to four months.

On March 22, the government communicated to states and Union Territories that the efficacy of the Covishield vaccine dosage would be better if the second dose of the vaccine is administered six to eight weeks after the first.

In early April, Serum Institute of India CEO Adar Poonawalla said the effectiveness of the Covishield vaccine rises to as much as 90 per cent if the two shots are separated by about 2.5-3 months. This was in stark contrast to The Lancet study, which found the vaccine to be 70 per cent effective against Covid-19.

State governments have increased the acceptable inter-dose gap to up to eight weeks, but at the same time permit citizens to get the shots in the 28-day period, if they voluntarily choose to do so. The revised gap applies only to the Oxford-AstraZeneca vaccine, marketed as Covishield by Serum Institute, and not for Bharat Biotech's Covaxin, for which the four to six week gap applies. All said, the question that remains unanswered is whether the gap between the dosages was increased due to the efficacy or due to a shortage in supplies.

Experts believe it is probably a mix of the two. Said Dr Farah Ingale, director, internal medicine, at the Hiranandani Hospital in Mumbai, "Covishield, also known as ChAdOx1 nCoV-19 (AZD1222), is based on a weakened version of a common cold virus or the adenoviruses found in chimpanzees. This viral vector contains the genetic material of the SARS-CoV-2 spike protein—protrusions present on the outer surface of the virus that help it bind with the human cell. As per scientific data, adenovirus-based vaccines are found to induce antigen-specific immune responses in humans.” Another novel approach, said Ingale, is to use a chimpanzee adenovirus (AdC68)-based vector, expressing artificial microRNAs, to target matrix proteins or nucleoproteins of the influenza virus. “Such vaccines have the potential to provide full protection from influenza virus by inhibiting viral replication. So by increasing the gap of the dose we are reducing the chances of adenovirus inactivation, thereby improving efficacy of the vaccine. It gives the authorities more opportunity to extend the vaccination drive and make it available to more people.”

A differential time gap for the two vaccines can be because of different ways in which they are developed. Bharat Biotech's Covaxin, said Ingale, is an inactivated vaccine that was developed using whole-virion inactivated vero cell-derived platform. They contain dead virus, incapable of infecting people, but capable of instructing the immune system to mount a defensive reaction. Therefore, the efficacy of the vaccine is maintained.

Said Dr Prabhakaran Dorairaj, cardiologist and vice president (research and policy) at the Public Health Foundation of India, "Based on the experience in the UK and other countries, it appears that the longer the duration between the two vaccines, better the efficacy. Ideally, around eight weeks. It is not true that the government is doing this to conserve vaccines. The evidence is out there for us to see. Also, there is no single number you can give. Anything between 8 and 12 weeks is fine. The WHO may have taken the span till 12 weeks, but that does not mean that the eight week span is wrong."