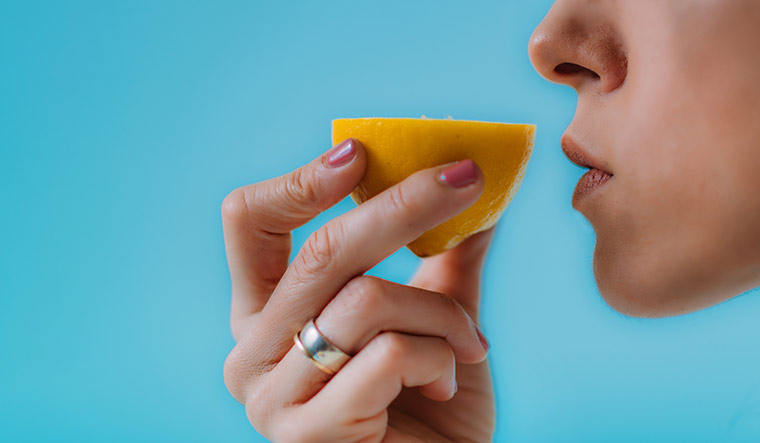 For Varshith Venu, the most worrisome symptom of Covid-19 was the loss of smell. The 17-year-old from Tirupati, who enjoys the smell of food as much as its flavour, grew anxious when he lost that sense for over four months. “It was terrible. I like chicken biryani and all kinds of Indian breakfast... I hate eating vegetables, though,” he says with a smile.

Venu got infected while he was preparing for the CA Foundation exam in Rajasthan. “I consulted doctors thrice,” he says. “They gave me some drops and I finally got better.”

Anosmia, or the loss of smell, is one of the less common symptoms of Covid-19. “Overall, loss of smell and taste is seen in about 45 per cent of patients,” says Dr Sushila Kataria, head and director, department of internal medicine, Medanta the Medicity, Gurugram. “Usually, it returns to normal in one month. Some continue to have an altered sense of smell long after recovering from Covid-19. They report a different smell sensation. Sometimes, the smell comes but not completely.”

Any amount of inflammation can compromise blood supply and cause damage to the olfactory receptor neurons responsible for the sense of smell, says Dr Srinivas K., consultant, ENT, head and neck surgeon, Vikram Hospital, Bengaluru. “Most such damages are reversible,” he says. “Over a few days, as the blood supply increases, the inflammation comes down, either due to medication or because the disease loses its severity.”

Says Dr Kirti Sabnis, infectious disease specialist at Fortis Hospitals, Mumbai: “Supporting cells to olfactory neurons, called sustentacular cells, are studded with ACE (angiotensin-converting enzyme) receptors (which receive the virus). Once this cell balance is disrupted, it could lead to a shutdown of neuronal signalling, and therefore the loss of smell.”

Some recovered Covid-19 patients can experience a prolonged loss of smell. “In 20 per cent of our patients, we have seen this condition staying for over eight months or more,” says Dr Kalpana Nagpal, senior consultant, department of ENT and head and neck surgery, Indraprastha Apollo Hospitals, Delhi.

Vikram Hospital, Bengaluru has received 14 patients who had recovered from Covid-19 but had an impaired sense of smell. Interestingly, all of them were women. “They no longer enjoyed cooking and it really affected their daily routine,” says Srinivas. “Anosmia can have serious consequences. One may not even be able to detect a gas leak in the kitchen.”

Anosmia can sometimes lead to olfactory derangement, which can impact daily life. “Two of my patients developed parosmia (a condition where one’s sense of smell gets distorted.) They would find an unpleasant odour in even sweet smelling flowers,” says Srinivas. “That was a very challenging treatment. They were treated with a short course of steroid treatment and we even advised nasal dousing with steroids along with smell therapy. One of them has had significant improvement and the other one is on the road to recovery.”

However, some patients take longer to recover. “We recommend smell therapy, along with extensive medication in terms of nasal sprays and tablets to reduce inflammation,” says Srinivas. “There is a treatment protocol to be followed. We ask them to spend 15 to 20 minutes a day smelling organic fruits or flowers like jasmine or rose. This helps regenerate and stimulate neurons. We consider it an important part of the treatment. The majority of our patients have benefited from smell therapy. Some people recover within 20 days and some take about a month.”

Harika Dev from Bengaluru felt something was amiss while she was applying ointment on her husband. “I smelled it and realised I had lost my sense of smell,” says the 31-year-old. She had body pain and fever a few days earlier, and had taken antibiotics and Dolo 650. Dev frantically rushed to her family doctor. He told her that she seemed to have overcome Covid-19 and asked her to just quarantine herself. He also reassured her that she would regain her sense of smell gradually. Later, she got a CT scan, which slowed a slight infection.

But not everyone is enthusiastic about smell therapy. “It can be done as supportive care but as medical practitioners, we do not recommend it as it is not scientifically proven to solve any such problem,” says Nagpal.

Lack of research means few established methods of treatment exist, says Sabnis. “For my patients, a combination of multivitamins and smell training worked. It helped them have partial recovery within seven months. A few centres have tried a brief period of ‘irrigation’ of the sinuses with budesonide, a topical steroid,” she says.

Sabnis adds that, as anosmia is a neurological phenomenon that is yet to be fully discovered, treatment for prolonged loss of smell is still investigational.