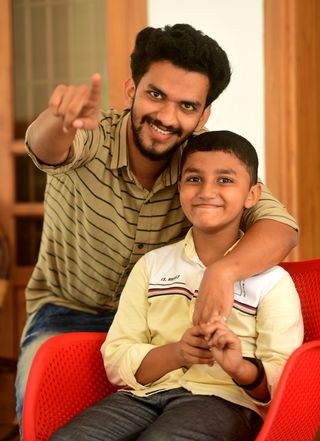 Salman Ahmed recalled the day his panic-stricken parents rushed his newborn brother, Yusuf, to hospital, after he suddenly took ill. The Ahmeds, who lived in Muscat, Oman, had lost two other sons who had shown similar symptoms: breathlessness and blue fingernails. “Yusuf was admitted to the ICU and had an oxygen mask and all sorts of tubes attached to his face and body,” said Salman, an engineering student, who was 12 years old then. “When Yusuf was discharged from hospital after two months, he was no longer a cherubic baby, but a thin, sickly one, with loose skin that folded over.” The doctors concluded that he had a primary immunodeficiency disease (PID), and he was administered a course of immunoglobins; the same treatment given to his late siblings.

The immunoglobin therapy kept Yusuf alive, but barely. “If there was the slightest delay in administering the medicines, he would fall ill,” said Salman. The treatment was expensive and a strain on the family finances. To make matters worse, the father died. The family then returned to their hometown, Malappuram, Kerala, where they had the support of extended family.

When Yusuf was four years old, his mother took him to the PID clinic at the Government Medical College, Kozhikode. PIDs are a range of ailments caused by various mutations in the genome, which render an individual susceptible to a host of infections, autoimmune diseases, allergies and malignancies. “PIDs are rare, but because of consanguinity, the number of cases in a particular region or community could be high,” said Dr Geeta Govindaraj, who heads the clinic.

Yusuf’s blood sample was sent to Institute of Genomics and Integrative Biology, Delhi, for whole genome sequencing. The results revealed that he was suffering from a rare condition called X-linked hyper IgM syndrome, a PID that occurs in males and inherited through the maternal line. Yusuf’s cousin, too, had died from an illness with similar symptoms.

Yusuf could be cured with a bone marrow transplant, and Salman turned out to be a perfect match. “When the doctor told us about the transplant, my mother was worried, for both Yusuf and me, but I was ready,” said Salman, with a smile. “We went to Apollo Hospital, Chennai, for the procedure. I thought my bones would be drilled, but it turned out to be so simple. A tube was inserted into my body, through which blood was drawn. The doctors extracted what was required for Yusuf, and the remaining blood was returned.” Yusuf’s procedure was longer and more complex. The transplant removed the genetically defective cells from his body and replaced them with Salman’s healthy ones.

Yusuf is now different in many ways. He is a healthy nine-year-old, who no longer requires immunoglobulin injections. His blood group has changed from O+ve to B+ve, the same as Salman’s. The brothers share a close bond. “He used to have straight hair, but now his hair is curly like mine,” said Salman. “I feel even more responsible for him now.”

(Some names have been changed)