How an Indian woman revolutionised the way couples hook up 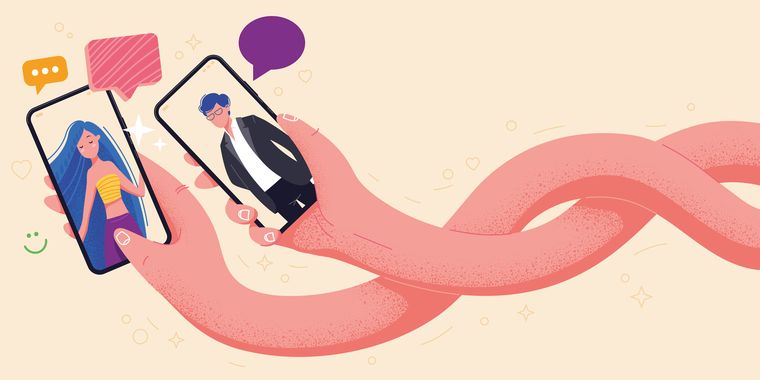 The place is anything but romantic: a tinted-window skyscraper rising among highways bordered with malls in Dallas, the business capital of Texas. Yet it was there, on the 15th floor, that Shar Dubey decided on the sentimental and sexual lives of a growing part of the planet.

When we met her in mid-January, she was the CEO of Match Group, which owns Tinder and another dozen dating apps including Meetic, OkCupid and Hinge. (She stepped down in May after two years at the helm, but continues to be director and adviser.) That Friday, Dubey had been hustling on her standing desk since 8am, following a video conference at 6.30am with the Korean teams. These early morning slots are necessary for the 52-year-old: her company revolutionises the way couples get together not only in the US but also in Europe and Asia. According to the analytics firm data.ai, Match Group is ranked second among mobile app editors whose users spend the biggest amount of money in the world after Google and before Tencent, video games aside.

The leader in online dating has grown considerably since the 1995 launch of the Match.com website. These past five years, its income rose from $1.3 billion to $3 billion in spite of Facebook’s entry on the dating market in 2018. But the group remains more private than other tech giants. So does Dubey: she has no Twitter or Instagram accounts.

Dubey is also wary of the Californian habit of letting societal debates infiltrate the company. Last fall, she nonetheless spoke up to denounce the new Texan law that bans abortion after six weeks by creating a fund to cover the expenses her female employees might have to pay if they abort in a different state. “I am not an activist and I don’t think it is usually the CEO’s job to take political stances. But I was asked what I think of this law and I couldn’t imagine replying ‘no comment’,” she says. 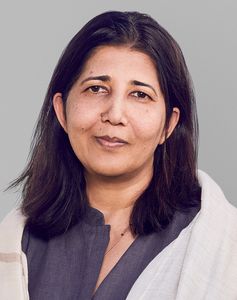 Dubey, however, doesn't hesitate to share her career history and the obstacles she faced because of her gender. Raised in Jamshedpur, by her father—an engineering school professor—and her stay-at-home mother, she was the only woman to be accepted at the Indian Institute of Technology (IIT) among a hundred male students. “My father was delighted that I got into the IIT, but in my distant family the first reaction was to tell me no one would marry me,” says Dubey.

She then flew off to pursue a masters at Ohio State University and she became the first woman engineer and the first foreigner to be hired by a Pennsylvanian aerospace manufacturer. “Many employees had been there for years when, suddenly, this girl with a thick accent turned up and told them what to do,” she recalls. Dubey is working on her accent by watching tons of sitcoms, and to fit in she shortens her first name from Sharmistha to Shar.

At that time, she was dating a former co-worker from India who had also moved to the US. “It was the first time someone married for love in my family,” she says.

When Mandy Ginsberg called her in 2006 looking for someone to manage Chemistry, the second brand launched by Match.com to compete with eHarmony, Dubey had never laid a finger on a dating website. And yet she decided to apply. She got along well with Ginsberg, whom she had met while working for a supply chain software producer. They formed a duo that would last for almost 15 years and transform the company. “It became obvious that Shar had some sort of magical comprehension of monetisation and of its balance with user experience,” says Ginsberg. She chose Dubey as president when she became CEO in 2017.

The Texan group transformed itself to address people of every age and demographic category. “The idea is to exploit the users’ earnings for a long time: young people start with Tinder, move on to Hinge, then Plenty of Fish, then Match and OurTime,” says Jason Helfstein, senior analyst at Oppenheimer & Co. The company also rides on the rise in divorces: “The average relationship lasts eight years in the US and in Europe. If our apps work out the first time, the user will come back,” says Match Group Americas CEO Amarnath Thombre, who also graduated from IIT. 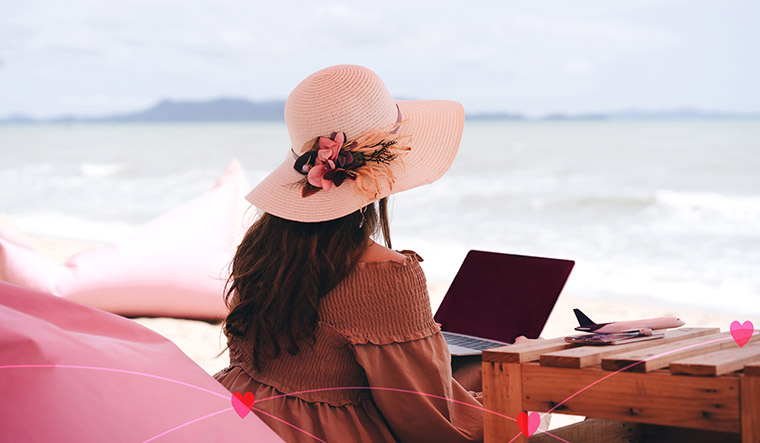 In 1999, Match Group was bought by the holding company IAC. Ten years later, Match Group bought People Media and its 27 targeted dating websites. These brands are now outdated but the segmentation strategy still prevails on the US market. In the last four years, Match Group created BLK for African Americans, Chispa for Latinos and Upward for Christians. Match then bought the French group Meetic, which allowed them to extend their markets to Europe, and OkCupid, a popular startup among hipsters.

“The first generation of apps was closer to the way arranged marriages work, that is you think you know what you’re looking for,” says Dubey. “But it often turns out to be wrong: on our platforms we have the advantage to see that even if you say you like tall men, that is not such an important criteria for you.”

While Match, Chemistry and Meetic required payment to send a message, OkCupid and Plenty of Fish (bought in 2015) innovate with a freemium model: sending messages is free, but users have to pay for certain features. This model boosts these websites, notably for young people, erasing little by little the “loser” image associated with using them.

“The internet has become the most popular way for heterosexual couples to meet in the US, even ranking better than mutual friends for the first time in 2013,” says sociologist Michael Rosenfeld. The use of dating apps has increased since. “When I first started at Match.com, 3 per cent of marriages in the US were born from an online encounter. Today it’s 40 per cent,” says Hesam Hosseini, CEO, Match and Match Affnity.

The use of dating websites is also developing outside of the west: Japan became Match Group’s second biggest market after the US two years ago, after the acquisition of the wedding-focused app Pairs. “Japan has a declining population and a Loneliness Ministry, to such an extent that the government is beginning to consider dating apps as a solution,” says Match Group Asia CEO Alexandre Lubot.

And the pandemic sped up this process: “In the post-Covid world, the places where you’d meet people physically have disappeared. After #MeToo, it has also become harder to meet people at university and at the workplace,” says Dubey.

Jessica Pidoux, a postdoctoral researcher who wrote a thesis about dating apps, says that the Tinder mindset is exporting itself beyond smartphones. “People evaluate others in an algorithmic manner, saying whether they like someone or not very early on,” she says.

Tinder did change it all. The app was created in February 2012 by entrepreneur Sean Rad and the developer Joe Muñoz. It was free and inspired by Grindr, the 2009 dating app for LGBTQIA+ men which switched complex questionnaires for a higher focus on pictures. But Tinder added the “double opt-in”, the need to mutually swipe right to start a conversation. “Tinder’s big input is that it solves the problem of rejection,” says Dubey.

A decade later, Tinder has become Match Group’s driving force: the app generates 55 per cent of its sales revenue against 31 per cent five years ago, thanks to a threefold increase in the number of users—now more than 10 millions.

Dubey strongly contributed to the transformation of the startup into a cash machine. In 2017, she travelled every week to Los Angeles to launch Tinder Gold, a paid feature that allows users to know who swiped right on you, inspired by Who Likes You on OkCupid. “This company knows how to take a brand’s best recipes over to another one,” says Helfstein. Since 2015, Tinder had already limited free swipes to 50 a day per person, offering a paid subscription to those who would want to go beyond that limit, and the possibility to buy 30-minute profile “boosters”.

But Tinder Gold takes monetisation to the next level, with prices of over 30 euros a month. The company launched an even more expensive formula last year and does not plan on stopping there. “Most of the monetised functionalities that we have created until now aim to render male users’ experience more efficient, since they do not want to be restrained by a certain number of swipes,” admits Dubey. “One of the things we are working on is finding what we can offer to make women pay, like getting a better control of who they see and who can see them.”

Romantic people are protesting against this transformation of the quest for love into a supermarket where everyone is pitted against thousands of others. And many users feel like the algorithm puts them at a disadvantage. In 2019, journalist Judith Duportail found a patent mentioning a “desirability score”: if someone with many likes swipes right on your profile, you will get more visibility. Tinder assures it doesn’t use this system anymore, but has never explained what it replaced it with.

“Algorithms are not very smart, but they improve with the time you spend on the app, and what you do on it. On Hinge, if you keep liking pictures of people in nature, we will deduce that you are more attracted to this kind of people,” says Thombre. Hinge is Match Group’s new gem. Dubey says it is “about to become the second biggest dating app in the world in a few years”.

Thombre orchestrated the buyout of Hinge in 2017. Here, people who are interested in someone can only contact them by giving short answers to three questions or liking their pictures, so they can break the ice more easily. Hinge only exists in English for now, but the platform counts 8 lakh users and its sales revenue increased sixfold in three years.

Newcomers in the dating app market are “limited by the more important companies’ possibility to patent popular functionalities,” says lawyer Evan Michel Gilbert. Before Match Group tried to buy out Bumble, the company had sued its rival for infringing their “swiping” patent. They also sued Muzmatch, a dating app for Muslims, for the same reason, as well as for also using “match” in their name.

“We only sue other companies to preserve our brand and our patents,” says Dubey. She prefers talking about her efforts to remain at the forefront of innovation, her new mission being to “make sure users do not pick someone merely because of a picture”.

Last October, she launched Tinder Explore, a tab giving access to interactive experiences. Last year, she also bought Hyperconnect, a Korean company with a strong interest in the metaverse. “They launched a beta experience in Seoul, Single Town, in which your avatar can go to clubs or to the beach and make unexpected encounters,” says Dubey.

Flirting may have disappeared in real life, but Match Group is desperately seeking to revive its appeal.