A BENGALURU-BASED software solutions company and an NGO are offering what is perhaps the best solution so far for the visually challenged in India. Smart Health Global, led by IIT Kanpur alumnus Ramu Muthangi, and Vision Aid have come out with Smart Vision Glasses (SVGs) customised for Indian users.

These spectacles are loaded with Artificial Intelligence aids—camera and sensors, and software to translate these visual inputs into audio ones to help the user ‘see’ what is immediately around her.

The easy-to-use spectacles have a small panel, the size of a small pen drive on the side, with Braille-coded options. The user simply needs to press for the option she wishes to use. For instance, if she opts for ‘things around me’, the spectacles scan all around and give inputs on what the immediate surrounding is like. It thus makes for a good mobility assistant, as it alerts the user about obstacles ahead.

The glasses also have a face recognition feature, by which over a hundred faces can be stored in its memory. So the next time a known face is before the user, she will get the voice input about it.

The reading assistant feature helps the user ‘read’. She has to bring the page near the camera, which takes a picture and then reads out the text, even instructing the user to go to the next page at the end of the text.

Another interesting feature is the helpline; pressing this option connects the user to the Smart Health Global team. Thus, it gives the user more autonomy; she does not have to depend on another person for simple troubleshooting. The spectacles can be connected to a smartphone via an app.

Sonia Srivastava, assistant manager, low vision services at Dr Shroff's Charity Eye Hospital, said that the device, which was being released through the manufacturer's partner hospitals, would be a game-changer for the visually challenged in India. “We have never had such a device,” she said. “The smart glasses from the west are exorbitantly expensive, costing several lakhs of rupees (SVGs cost a little above Rs25,000). Also, their voiceovers were in foreign accents, which were difficult for Indian users to understand. These SVGs are adapted for Indian languages, whether it is reading text in various Indian scripts, or whether it is in the ‘speaking out’, which is again in an Indian accent.” 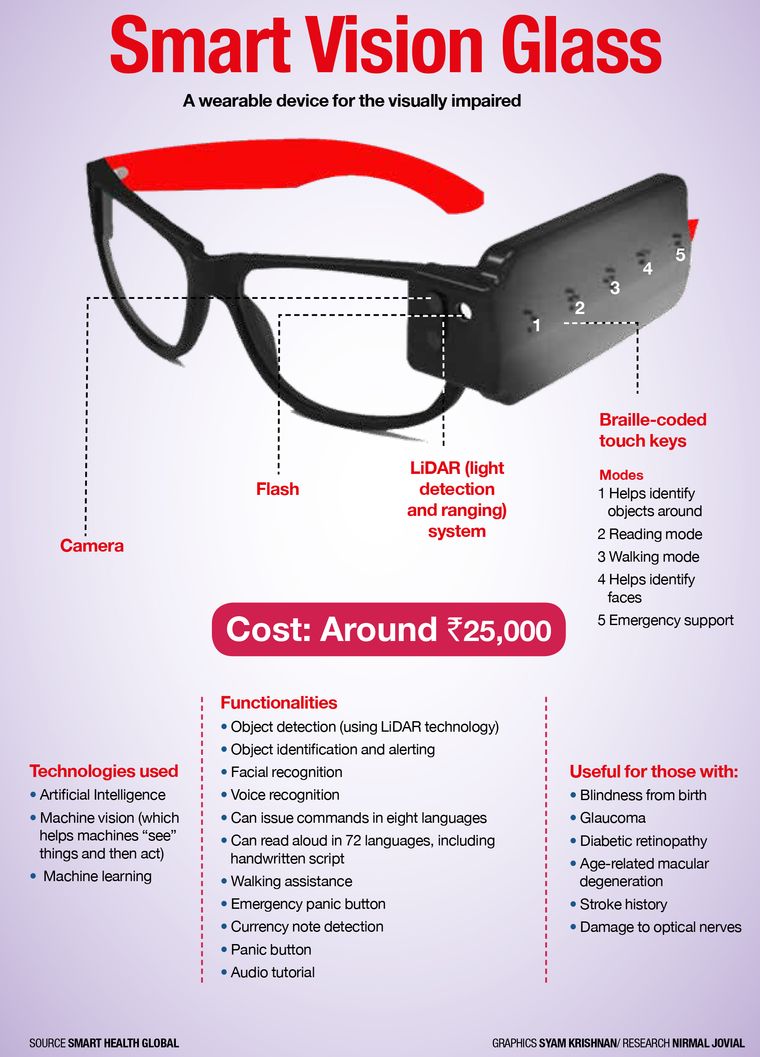