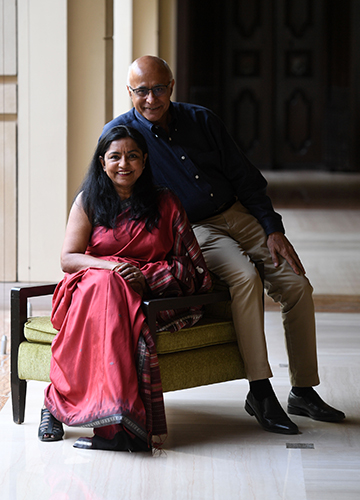 Decades ago, Subroto Bagchi, the co-founder of IT major Mindtree, and his wife Susmita, an acclaimed writer, used to travel to the US quite a lot for various projects. The couple spend considerable time there. They observed a sense of obligation towards the community among people there and were deeply influenced. The couple was awed by the ability of many moneyed people to write a cheque and walk away from it.

“There is a misconception that in the west it is all about me, myself and I,” said Bagchi. “Take the example of the funding of Stanford, Harvard or Yale. People exhaust their life’s savings and simply go away, often anonymously. That spirit is what funds long-term research. That is one of the things that creates academic freedom and flexibility to pursue nebulous, but potentially life-altering ideas. Though many of them do not materialise, if one or two do, they turn out to be inventions that save humanity.”

With this in mind, the Bagchis and Mindtree co-founder N.S. Parthasarathy and his wife Radha joined hands with the Indian Institute of Science Bangalore and donated Rs425 crore to help build a not-for-profit, 800-bed multispeciality hospital on the IISc campus in Bengaluru. It is the single largest private donation ever received by IISc and the hospital, which will be set up as part of a postgraduate medical college (the IISc Medical School), will be named the Bagchi-Parthasarathy Hospital.

“This will be the first large-scale effort to integrate engineering, science and medicine in the lap of an institution that has the culture of research,” said Bagchi. The medical college being located alongside the IISc's science and engineering departments is expected to lead to greater interactions and synergy between the disciplines. Bagchi added that breakthroughs in health care require engineering, science and medicine to coalesce. “The intersecting area becomes the space for path-breaking innovation,” he said.

He said that both he and his wife had great admiration for what IISc does, how it does it and its ability to stay the course with regards to the cause for which it was created. However, they had not imagined that they would get the opportunity to collaborate with the Institute of Eminence. Then, they heard, from the Parthasarathys, about IISc director Govindan Rangarajan's vision of creating an IISc medical college.

The Parthasarathys had met Prof Rangarajan on December 30, 2021 and were interested in the project, but they were nervous about engaging with an institution of the stature of IISc and about the scale of the idea. They decided to discuss the idea with the Bagchis. “Susmita is the cautious one among the two of us, but within minutes, her eyes lit up,” said Bagchi. “To Partha’s surprise and joy, we told him on the spot that he had made a great choice and that we also wanted to come on board. The very next day (December 31, 2021), we met Dr Rangarajan. We saw in him a leader driven by purpose.” 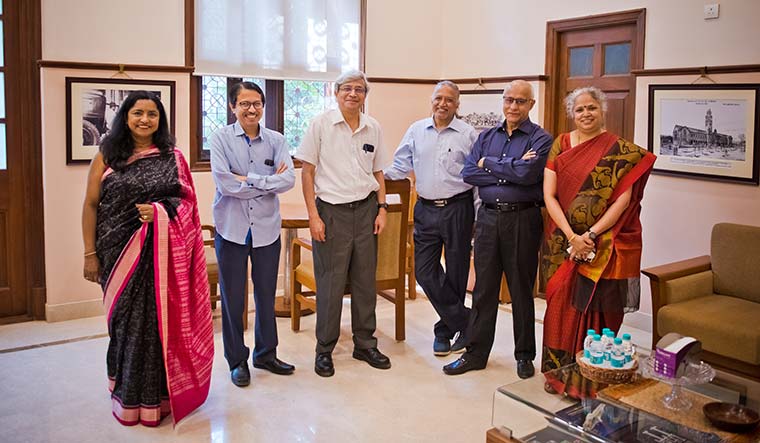 Rangarajan said that the Parthsarathys had seemed keen on being involved in the project even during the first meeting. This combined with the fact that they returned with the Bagchis the next day was a good sign. But, Rangarajan was still unsure whether the meeting would be fruitful. After all, he had made hundreds of presentations to large institutions to no avail. But after the meeting that lasted an hour, the prospective donors told him that they were not thinking in terms of “whether or if”, but how and when. “During our discussions, we discovered that our visions were closely aligned and it was a real joy for me to interact with them,” said Rangarajan. They also met Prof Navakanta Bhat, dean, division of interdisciplinary sciences, IISc.

On January 5, the Bagchis and the Parthasarathys said they would jointly donate Rs425 crore for the construction of the hospital. “I was accompanied by Prof Bhat during this meeting and both of us literally jumped in joy,” said Rangarajan. Bagchi said that they were blown away by how much homework the two professors had done. “It did not feel like we were dealing with an academic institution because of the clarity, the collaborative spirit and the unbelievable response time of IISc,” he said. 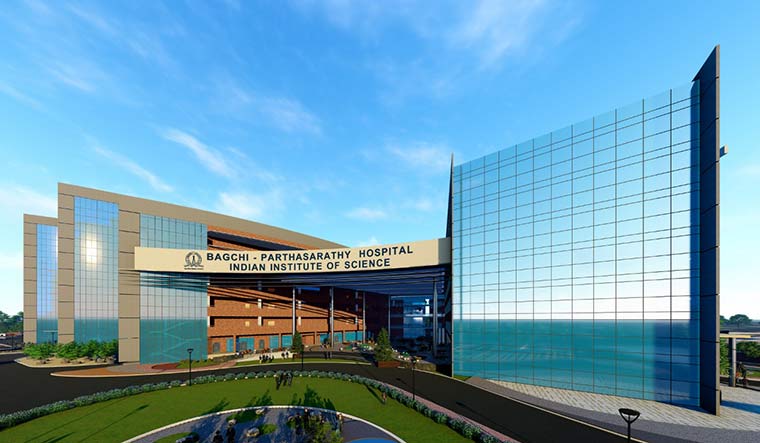 In the pipeline: Concept picture of the proposed hospital | Courtesy Iisc Bangalore

The Bagchi-Parthasarathy Hospital will provide advanced facilities for diagnostics, treatment and research. Facilities for genome sequencing, robotic surgery and organ transplant will be available. A comprehensive bio-repository will be created in the hospital for retrospective and prospective analysis of patient samples such as blood, tissue culture and lung lavage.

Prof Bhat said that the hospital is envisioned to be a “digital hospital”, implementing technologies and solutions to enhance operational efficiency. Moreover, for training, simulation platforms will be made available. “For instance, the operation theatres will have live feed to the seminar halls so that the postgraduate students and researchers can have real-time exposure to complex surgeries,” he said. The latest augmented reality and virtual reality tools will be available to enhance the educational experience.” He added that a telemedicine suite with haptic interfaces will be provisioned for remote follow-up and long-term care delivery to patients in peri-urban (immediately adjacent to urban) and rural settings. “Given the evolving research on mind-body connection on healing, the hospital will have an integrative medicine wing with yoga and meditation facilities,” he said.

Rangarajan said the larger vision of the project was to establish the best medical school in India and one of the best in the world. He added that this can be achieved by conducting high-impact clinical research, which leverages the IISc's existing strengths in science and engineering. Another important aspect is to train a new cadre of “physician-scientists” who will be highly knowledgeable both in basic research and clinical studies. “In the MD-PhD programme, MBBS graduates will spend time in the hospital performing clinical studies and in the science or engineering labs performing basic research,” said Rangarajan. “Combining both these aspects, they will submit a single thesis at the end of five-six years and will be awarded both an MD and PhD. These students will spend around six months in the best medical schools abroad, further enhancing their training.” Students of other courses on the IISc campus will also benefit by interacting with the medical faculty and by being able to do projects oriented towards clinical research.

The architect for the project, Archi Medes Consultants, was finalised after a rigorous selection process involving more than a dozen firms specialising in hospital design. They came up with the final design of three interconnected blocks for the hospital, a utility block and an academic block. The architecture, the modularity of design and the equipment are all geared towards world-class standards. IISc plans to hire faculty for the medical school from 2024.

Rangarajan took over as director, IISc, in August 2020, months into the pandemic. Therefore, he felt that the immediate priority for IISc should be establishing a postgraduate medical school so that it can help the country in preparing for and mitigating future health care crises. “Given my own interdisciplinary background, I had seen first hand the advantages of collaborating with other disciplines,” he said. “Hence, I wanted the integration with science and engineering. When this idea was proposed to our senate and governing council in early 2021, they fully supported it.”

For the Bagchis, philanthropy is not new as they have funded a cancer hospital and a palliative care unit to be set up in Bhubaneswar by Sri Shankara Cancer Foundation and Karunashraya, respectively. The two projects together will have an outlay of 0340 crore. The government of Odisha has given 20 acres of prime land to each institution, free of cost. While researching for these two projects, they had looked at many global institutions for ideas and had come across something inspirational.

“We all know about the Sloan Kettering Hospital in the US,” said Bagchi. “It is at the forefront of cancer treatment and research. What many do not know is that this started relatively small, as Marshall Hospital. And then came Alfred Sloan and Charles Kettering, auto-industry executives who came to Marshall Hospital, wrote fat cheques, and walked away. How did they do that? It couldn’t have been a decision based on kneading excel sheets. It was a work of heart.” Humankind, he added, needed such works of the heart more than ever before. “We saw IISc presenting us a platform to help build an institution that may turn out to be something like a Sloan Kettering or a Mayo Clinic or the Harvard Medical School,” said Bagchi.

He said that he and his wife have shared vision, values and objectives all their lives. “When Mindtree happened, all the founders had emptied their life’s savings into the initial equity, even before the venture capital was raised,” said Bagchi. “When it became successful and over the years it became apparent that we will be rewarded with more money than we needed, Susmita and I called our daughters Neha and Niti. We asked ourselves what our approach to wealth should be. We needed our children to be decision makers as well. Susmita and I suggested that a substantive part of the wealth must go into serving larger causes, helping build institutions. Our daughters listened. But they had a caveat: 'Keep what you need for your own future and please spend the rest of the money for causes you find dear to you. But please, do that in your own lifetime'.”

For Parthasarathy, Covid-19 provided a moment of clarity. His mother was hospitalised during the peak second wave. Because of the rush and scarcity of beds, it had taken hours of anguish before she finally got into a hospital. “We could not go in,” he said. “We didn’t know what would happen next. We were standing on the road for hours and then we realised we were hungry. This was during the complete lockdown and there were no restaurants open. We called a friend, who was kind enough to bring us some food. We sat on the road outside the hospital and gratefully ate the food. Sometimes, you can have all the money you want but it cannot even buy you food. Eating on the road that day, in that moment of distress when a loved one was inside the hospital, we were seized by the urgency of the situation.”

He and Radha strongly believe that philanthropy must take its rightful place in supporting and enhancing India's outstanding public institutions. “People with money are not necessarily the best people to build and run world-class institutions,” he said. “And we should be comfortable donating and leaving it to the institution. Radha and I come from ordinary backgrounds and studied in ordinary schools,” he added. “We believe that destiny has placed resources in our hand for a purpose and we have to fulfil that purpose. We have the full support of our daughter and son-in-law for using these resources for the common good. Our intention was to fund education and health care and the IISc project presented us with this opportunity.”

The philanthropists hope that one day IISc will give humankind the next great thing, like insulin or a Covid-19 vaccine. But equally important, they hope it will make breakthroughs in medicine and health care delivery that will lead to equity and access. “The professors at IISc keep using a phrase we like,” said Bagchi. “They talk about medicine 'for the next 6 billion people'. At the core of this gigantic vision is the need to breed the scientist-physician and this can happen through the proposed focus on the MD-PhD programme.” He added that the dream to make IISc a breeding ground for med-tech was equally significant. “Med-tech entrepreneurs will flourish,” he said. “These youth will come from many disciplines and co-create medicine, devices and systems for delivery. The silicon valley of medicine will come up here.”