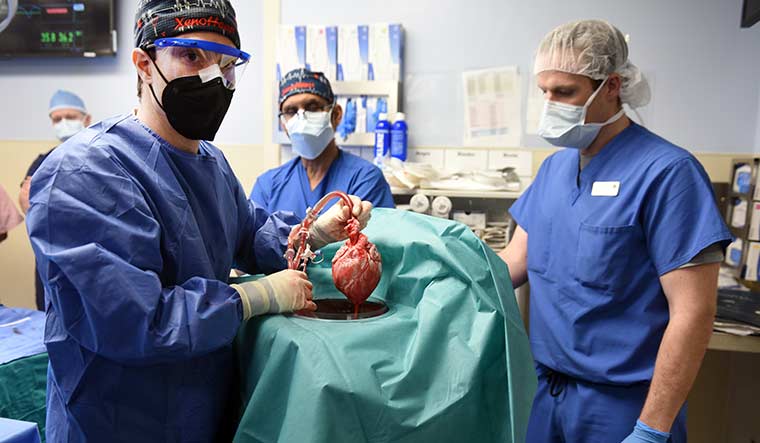 Big leap: Members of the surgical team show the pig heart for transplant into patient David Bennett | University Of Maryland School Of Medicine

In a medical first, a 57-year-old heart patient in the United States received a heart from a genetically modified pig. The pioneering procedure, performed by surgeons at the University of Maryland Medical Center on January 7, could offer hope to thousands of patients who are waiting for organ transplants.

According to the US federal government's Health and Services Administration, 17 people die each day waiting for an organ transplant and another person is added to the waiting list every nine minutes. “About 20 per cent of patients on the heart transplant waiting list die while waiting for a transplant or become too sick to be good candidates for the complex procedure,”the American Heart Association said in a statement. In India, about 50,000 people suffer heart failures annually, but only 10 to 15 transplants are performed every year, as per the Union health ministry's Directorate General of Health Services.

“There are simply not enough donor human hearts available,”said Dr Bartely P. Griffith, who transplanted the pig heart into the recipient. He added that the breakthrough brings us one step closer to solving the organ shortage crisis. David Bennett, the recipient of the pig heart, is doing well and is being closely monitored.

Bennett was suffering from terminal heart failure and had been bed-ridden for six weeks leading up to the surgery. He was connected to a heart-lung bypass machine called extracorporeal membrane oxygenation (ECMO), which kept him alive. The transplant of porcine heart was the only option for the patient as he was ineligible for a traditional human heart transplant and for an artificial heart pump because of his life-threatening arrhythmia. “It was either die or do this transplant,”Bennett said. 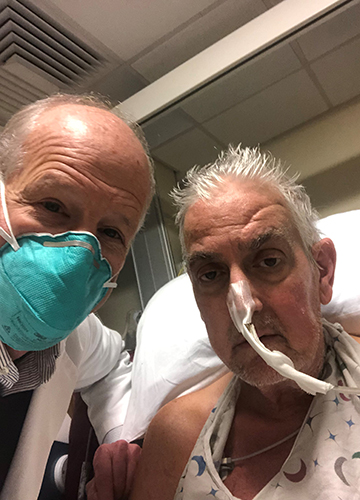 The US Food and Drug Administration gave emergency approval for the procedure through its compassionate use programme. The programme gives a patient with a life-threatening medical condition access to an experimental drug or medical device outside of clinical trials when no satisfactory treatment options are available.

If successful, this could be a watershed moment in xenotransplantation—the use of animal organs, tissues or live cells for human transplants. Attempts at xenotransplantation date back to the early 1900s. There have been several failed attempts with pig, goat, sheep and monkey organs over the years. In 1963, Dr Keith Reemtsma, an American transplant surgeon, transplanted chimpanzee kidneys into 13 patients. Twelve of the patients died within four to eight weeks of the transplant; one patient survived for nine months. The first heart xenotransplant was performed by Dr James Hardy in 1964, using a chimpanzee heart, but the patient died within hours. In 1984, a baboon heart was transplanted into an infant girl known as Baby Fae, born with a fatal cardiac defect, but she died 20 days later.

However, pig heart valves have been successfully used to replace heart valves in humans for years. Pigs are considered a better choice for xenotransplantation than primates for several reasons. They are easier to raise, have large litters and achieve adult size within about six months. Pig organs are anatomically similar to human organs, and they are viable for genetic engineering. But the clinical use of these organs has been impeded because of the significant risk of xenozoonosis—the transmission of disease from an animal to a human through transplantation. Transplanting animal organs into the human body can also trigger severe immune reactions and immediate rejection of the organ, which can be potentially deadly.

However, newer technologies like cloning and gene editing have yielded tremendous success, making it more viable. “This is the culmination of years of highly complicated research to hone this technique in animals,” said Dr Muhammad M. Mohiuddin, a professor of surgery at the University of Maryland School of Medicine who established the cardiac xenotransplantation programme with Griffith and is its scientific/programme director. “The FDA used our data and data on the experimental pig to authorise the transplant.” Mohiuddin has more than 30 years of experience in xenotransplant research and has been successfully experimenting and transplanting pig hearts into baboons for years. In recent experiments, the primates have survived up to nine months and died from lung infection unrelated to the transplant. 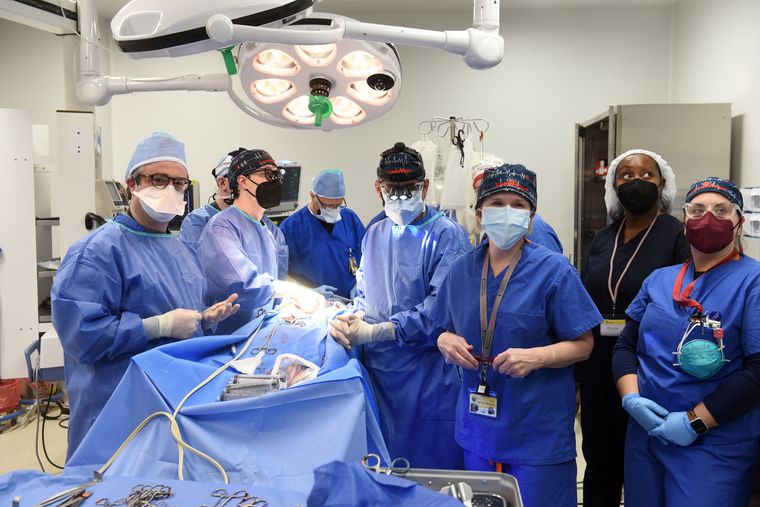 Team work: The members of the surgical team transplanting pig heart into David Bennett | University Of Maryland School Of Medicine

The genetically modified pig that was used for the heart transplant was provided by Revivicor, a regenerative medicine company that is working to develop pig organs to transplant into humans. Revivicor is a US firm that spun off from PPL Therapeutics, the UK company that helped to clone Dolly the sheep, the first mammal to be cloned from an adult cell. “This transplant is groundbreaking, and is another step in the investigation of xeno organs for human use," said David Ayares, PhD, chief scientific officer, Revivicor.

The researchers modified 10 genes in the pig heart that was used for the transplant. Four genes were removed: three of them were responsible for producing antibodies that cause rejection and the fourth one to control the growth of the pig heart tissue once implanted, Mohiuddin explained. Six human genes that would make the immune system accept the new organ were inserted into the genome of the donor pig.

The research team also used an experimental drug developed by Mohiuddin and Kiniksa Pharmaceuticals, along with conventional anti-rejection drugs, to suppress the immune system and prevent the body from rejecting the new pig heart. Once removed, the pig’s heart was preserved until transplant in a new perfusion device. The device, developed by medical technology company XVIVO, preserves the donor heart at 8 degrees Celsius while continuously pumping an oxygenated “proprietary solution”through the organ.

Griffith told The New York Times that the “anatomy was a little squirrelly”. “We had a few moments of ‘uh-oh’and had to do some clever plastic surgery to make everything fit,”he said. “It creates the pulse, it creates the pressure, it is his heart. It’s working and it looks normal. We are thrilled, but we don’t know what tomorrow will bring us. This has never been done before.” The pig heart has been performing well so far after the experimental eight-hour procedure, without any immediate signs of rejection. Bennett is off ECMO; his new heart is pumping, and he is breathing on his own. He talked to his son who visited him. David, Bennett’s son, told the Associated Press: “He realises the magnitude of what was done, and he really realises the importance of it. He could not live, or he could last a day, or he could last a couple of days. I mean, we’re in the unknown at this point.”

Calling the procedure a game changer, Mohiuddin said: “If this works, there will be an endless supply of these organs for patients who are suffering. We have the technique of genetically modifying and if there is more tweaking required for modifying the genes, we will be able to do that and even customise the heart or other organs for the patient. The successful procedure provided valuable information to help the medical community improve this potentially life-saving method in future patients.” The heart transplant follows the efforts of surgeons in New York, last October, who temporarily attached the kidney of a genetically engineered pig, provided by Revivicor, to a brain-dead person who was being sustained on a ventilator. The organ functioned normally.

While most of the medical community is excited about the procedure’s potential for reducing wait times and easy availability of animal organs for human transplants, some have raised ethical questions as well. Animal rights groups like PETA oppose xenotransplants and the use of animal organs for human transplants. PETA condemned the surgery both on the grounds of animal cruelty and the potential to transmit animal viruses to humans. “Animal-to-human transplants are unethical, dangerous, and a tremendous waste of resources that could be used to fund research that might actually help humans,”the organisation said. “The risk of transmitting unknown viruses along with the animal organ are real and, in the time of a pandemic, should be enough to end these studies forever. Animals aren’t tool sheds to be raided but complex, intelligent beings.”

This is unknown territory, and the doctors are not sure how well the pig's heart will survive in the human body. The one-year survival rate of human heart transplants is 91 per cent, according to the American Heart Association. On average, heart transplant recipients live another 12 to 13 years. “Rejection of the organ can occur any time after transplant,”Griffith told STAT, a leading medical news website. The immunosuppressive medications used to prevent rejection also carry risks. “The intensity of immune system suppression required is higher with a xenotransplant than with a traditional transplant from a human donor,”he said. “We are proceeding cautiously, but we are also optimistic that this first-in-the-world surgery will provide an important new option for patients in the future. 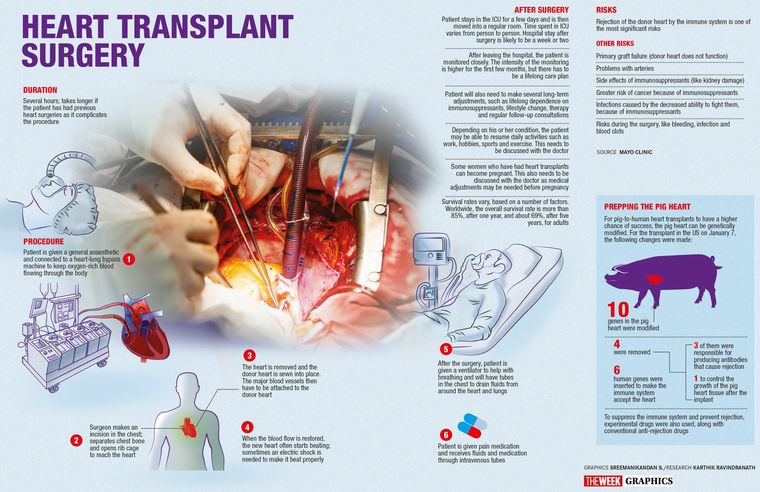