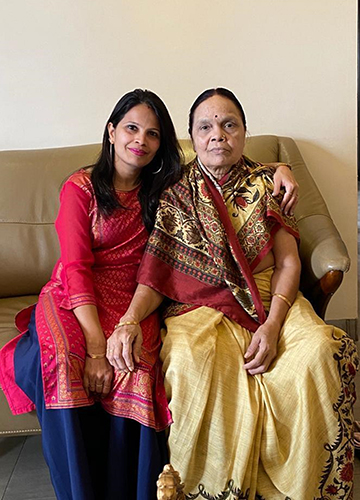 CANCER, for Kanaklata Dugar, was like the unwelcome guest that refuses to leave.

During her long and arduous battle, Kanaklata had three surgeries and six cycles of chemotherapy. But the cancer kept coming back. The 66-year-old resident of Rajarajeshwari Nagar in Bengaluru then underwent immunotherapy and is cancer free now.

Kanaklata was diagnosed with breast cancer at 40. She was disease free for eight years, but had a relapse in 2004. She had another round of chemotherapy and surgery and was declared cancer free. But in 2017, she was diagnosed with carcinoma endometrium (a type of uterine cancer). She had her uterus and ovaries removed. In 2018, Kanaklata developed lung cancer. She was physically and emotionally drained.

Chemotherapy was not very effective in her case. “Initially, she showed some improvement. But she had a relapse even after six rounds of chemo,’’ says Kanaklata’s daughter Monika, 40, who works as a senior financial analyst with Hewlett Packard Enterprise.

The family prayed for a miracle. And so, when doctors suggested immunotherapy, the Dugars decided to give it a try. “We wanted our mom back desperately,” says son Anup, 47, a businessman.

Dr N. Aditya Murali, consultant-medical and haemato-oncology, Aster CMI Hopsital, and his team of doctors who treated Kanaklata found that she could be a good candidate for immunotherapy. “We looked for biomarkers that could predict response to the newer immunotherapy medications,” says Murali. “Upon genetic sequencing of the tumour, a genetic defect called microsatellite instability (MSI) was found, which would predict an excellent response to immunotherapy. Once this diagnosis was established, the patient was started on immunotherapy in late 2018.”

Immunotherapy, which activates our immune system to fight the tumour cells, has given Kanaklata a new lease of life. But Murali does not recommend immunotherapy for everyone. “It works in patients whose tumours are positive for a marker called PD-L1 or MSI,” explains Murali.

None of the traditional side effects associated with chemotherapy is seen in immunotherapy, says Murali. “There may be very rare side effects caused by an overactive immune system, but they are far less common and easier to manage than conventional chemotherapy side effects,” he says.

Poonam Bhurat, Kanaklata’s daughter, agrees. “Mom didn’t have ulcers or mood swings after immunotherapy. Neither did she lose hair,” says the 43-year-old homemaker. “However, the first time she took immunotherapy, she got diarrhoea and she felt drowsy the next day. She also complained of fatigue for two days.”

Kanaklata had treatment every three weeks and after a year, the doses were reduced. She underwent treatment for two years. “Though the treatment is a bit expensive, it worked wonders for my grandmother,” says Harshit, 21. “We are so relieved to know that there are no active cancer cells in her body.”

Kanaklata is in excellent general condition, says Murali. “The battle that began in 1996 has led to a cure in 2021 with the ingenious use of immunotherapy, that too in the presence of a rare genetic abnormality,” says Murali.

The cost of immunotherapy varies depending on the type of molecule used. It could be anywhere between Rs1 lakh and Rs4 lakh per dose. How many doses would a patient generally need? “Immunotherapy is generally given till the time the disease is in control or till the time the patient develops intolerable side effects,” says Murali. “On an average, patients on immunotherapy continue this drug for anywhere between a year or year and a half and sometimes a little longer.”

Despite her trying tryst with cancer, Kanaklata has been a pillar of strength to the family. “Mom is a strong-willed lady,” says Poonam. “She doesn’t want to be dependent on others.” Adds Monika, “She is so calming to be around and she gives a great deal of support and comfort to us.”