Penning down her demons 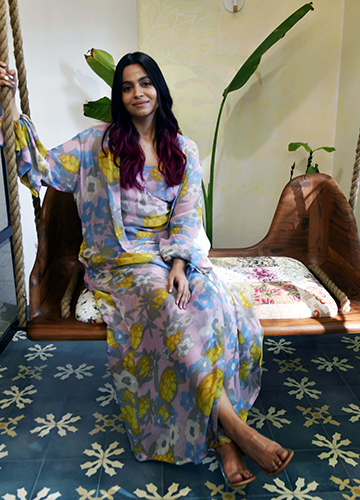 For the longest time, actor Soni Razdan thought that her elder daughter, Shaheen Bhatt, was acting lazy, delaying school on purpose, locking herself up in the room for no reason and was just being a difficult teenager. Little did Soni realise that Shaheen was dealing with insomnia and depression. “What breaks my heart is that even after being so close to my daughter, I could not have guessed that she was having suicidal thoughts until she communicated the same to me much later,” said Razdan at the launch of Shaheen's book—I’ve Never Been (Un)Happier— organised by Penguin and Landmark Books.

The book, which has notes from her journal, is a searing portrait of life with depression. “I feel no good. Like a duck among swans. And somewhere I hate the world for doing this to me. Setting me up to these standards I can’t meet. Making it all my fault. I want to implode, to disappear,” read a journal entry of a 20-something Shaheen.

Another entry, from a 13-year-old Shaheen, reveals her constant battle of feeling like a “loser”; how she struggled with the thought that Alia, her younger sister, is “so good in everything she tries”, but she isn’t good enough. “I was feeling very inadequate,” recalls Shaheen, now 32. “That is how everything started for me—with this overwhelming feeling of inadequacy that I had all the time.”

Dressed in a bright, flowy dress with flower prints, she is warm and high-spirited the day we meet in the office space of her Juhu house that she shares with Alia. The pristine white walls are painted with cat motifs and cat paws. “That’s how a cat lover’s house would look like,” she says, smiling. Shaheen is overwhelmed, “but in a good way”, with the response that the book is getting. Though she never planned to write a book about her mental health, it was no surprise that she did as she loves writing. “The first journal entry that I have put [in the book] is from the time when I was 12. That is when my depression started to hit. Writing was a means of survival, if I didn’t get it out of my system, I would not have been able to deal with it.” But she struggles to write often. “Putting it on a piece of paper makes it real and I didn’t want to make it real because it was already so bad, so bad in my head,” she says. “I felt I can’t write because I can’t keep dealing with the fact that this is what I am feeling all the time.”

And then, in 2016, she made her battle with depression public with an Instagram post. She was tired of posting happy pictures when otherwise she was struggling to live. It was followed by an article in a magazine. “Penguin (publisher) contacted me after that and it seemed like a good idea,” she says.

A couple of months into the project though, it started taking a toll. “I was reliving a lot of things, terrible moments that you do your best to avoid thinking about,” she says. She writes about a time she had accompanied her half-sister Pooja Bhatt to a photo shoot along with Alia. She was 12, Alia was six. While Pooja and Alia looked alike, Shaheen saw herself as distinctly different–“newly overweight and tanned” after spending too much time in the sun. After a point, she was excluded from the shoot as her sisters were taken to a better location. She has fought a sense of insecurity ever since.

In another chapter, she talks about the time she started seeing suicide as a “route to relief”, finally taking that drastic step in 2006 by swallowing a few pills. The suicidal thoughts came back a couple of months ago. “It was the first time in a very long time that it happened,” says Shaheen. “I couldn’t figure why I was feeling this way. But I am way better equipped emotionally to handle it [now].”

Reliving the earlier times has been the hardest thing. “It would [sound] like a cliché, but it has been one of the most cathartic experiences of my life,” she says, adding that most of her life has been about getting through these situations rather than trying to see the silver lining. “Writing the book has been a good experience because I was thinking about what it (depression) has given me. Until then, I was just thinking about what it has taken away from me.” 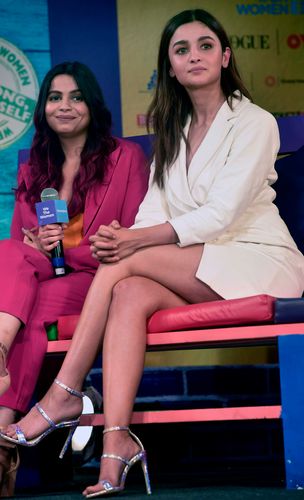 Sibling support: Alia and Shaheen at the We The Women Summit. Shaheen says that Alia has been her rock | Janak Bhat

Though depression is not something that can be romanticised, it has given her “the ability now to connect with people that I wouldn’t connect with otherwise”. The diary entries in the book are in her handwriting, and it was her idea. “From the start of doing this, I didn’t see any point of doing it in half measures,” she says. “I can talk about I felt this and I felt that, but this is the easiest way for me to show someone what I felt at that moment by showing them what I had written then. To me, that’s the most real part of the entire book. They are scans of my lowest moments. They are scans of my worse insecurities.”

But she finds some of these moments funny, too. Like, the one where she thought being overweight was the root cause of all her problems. “One of the reasons I think I have gotten through depression is because I have a sense of humour about it,” she says. “I just find my situation very funny. I feel like, ‘what a great life and I am just miserable all the time.’”

The misery turned her life upside down. She never took studies seriously—she wanted to drop out of school in class 10, dropped out of college and later finished graduation through open university. “In hindsight, I realise I should have cared more about education,” says Shaheen. “Not for any other reason, but it is just a good way to learn about yourself. I am in a very privileged position where my education has not had any bearing on what I have done with my life. For most people, that’s not the case. It prevented me from exploring my likes and dislikes. Now, I know that I like history. Had I continued with college, maybe I would have got a degree in history.”

And, she is aware that it is thanks to her privilege that she can talk about her mental health without worrying about repercussions. That is why she does not like being called brave. Also, she wants to bring home the point that despite her privileged position, she has mental health issues. “My privilege has nothing to do with my mental illness in that sense,” she says. “All it does is it gives me a massive ability to deal with it, to tackle it and the luxury to sort of wallow in it, which people don’t have.”

Yet, it took her more than five years to tell her parents what she was living with. She opened up to them at 18. She was worried about how her mother would take it, not so much about her filmmaker-father Mahesh Bhatt as he, too, had “to some extent suffered from depression”. But Alia has been her rock—“she has been a bridge between my mother and me, and my father and me,” she says. At the We the Women summit hosted by journalist Barkha Dutt, Alia spoke about how she truly understood what Shaheen was going through only after reading the book. Her actions started making sense to her more, like why Shaheen was changing therapists. Shaheen says she did that initially because she couldn’t find a therapist who understood her or matched her wavelength. “Later, I felt, past a certain point, you get what you could out of one person [and you have to move on],” she says.

Shaheen still takes pills for sound sleep, and therapy, she says, is work for her. There are days when she doesn’t want to go for therapy, but she knows she needs it. “The fact that I don’t feel like talking today means that I need to talk. It is pushing through whatever resistance that comes up in me and making sure that I do it,” she says.

There have been stories of people being fearful of therapy, and Shaheen understands that fear. “It is daunting,” she says. “You are confronting yourself essentially. It is not going to be easy. It brings up a lot of things that you don’t want to deal with. But the stuff you think is easier to put away, and think by putting away it is going to be fine, it is going to be way worse later. I feel it is a lot easier to deal with the discomfort of sitting with the therapist and talking with them. More than medication, talk therapy has helped me.”

With the awareness she has accumulated over the years of dealing with depression, the good phases last longer now. “I know how to look after myself. I know the things that I can do and cannot do. Things that I should and should not do. I don’t beat myself up about it,” she says. She is now working on her second book, also nonfiction, and is busy with Here Comes The Sun—an online campaign to spread awareness about mental illness. “Two of the biggest challenges in treating depression are the stigma attached to it and the lack of awareness and knowledge,” says Shaheen. “Due to this, individuals and their family fail to recognise the onset of depression and sometimes just refuse to acknowledge the problem.” Through HCTS, she wants to “empower society with greater awareness of depression and anxiety, to encourage public dialogue and to promote understanding to ensure timely treatment, through online and on ground campaigns”.