Know very well that this fight is not over 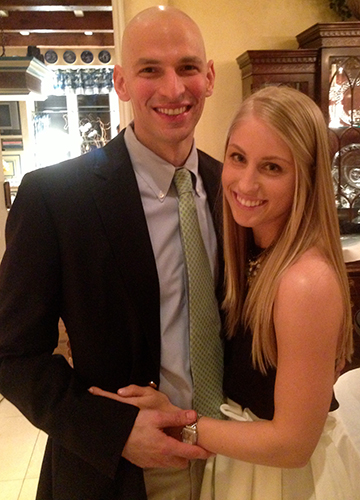 What is the one quality of David that you admire?

One quality that I admire about David is his drive and passion for the work that he does. When David decided that he was going to make it his life's mission to find a cure for Castleman disease it was never a question; he put his head down and ploughed through the obstacles that were standing in his way.

Were you part of his decision-making process when he decided to try new drugs on himself or go to business school?

When he decided to try a new drug on himself it was a game-time decision. All his research thus far had led him to make the most educated decision. It was pretty terrifying for the both of us that there were no other patients on this drug for his illness, but I was supportive if he and his doctors thought this was the right path to take. I was also part of his decision to attend business school. He had realised that while he was sick it wasn't only the doctors that make an impact on your life, but also the role that the drugs play. He felt that attending business school would bring his medical background to a new light and help him in finding his cure.

What was your thought process during his relapses? Were you terrified?

I handled each of his relapses a little differently. One in particular I can remember feeling like we were heading into war. He had been through this before and could get through it again with no problem. I felt confident and knew he was going to come out of this. The last relapse five and a half years ago was difficult. We were engaged at that point and things felt a bit more 'real'. He wasn't bouncing back as quickly as he had in the past and I knew something wasn't right. Thankfully, he pulled through, but it was a bumpy road.

You were with him throughout and so you have seen him go through quite a bit. How did you get through those years?

I would not have been able to get through this without my family and friends. My parents were a constant support system for me. My mom came out to Little Rock, Arkansas, to be with me and to support Dave. My close friends called or texted me constantly to make sure I was doing okay, and I was so thankful for that.

What are your thoughts on the book?

I am very excited for the book to be released and for Dave's story to be heard by more than just our family and friends. It is an inspiring journey and one that I hope will inspire readers to reflect on their hopes/prayers/wishes and then turn their hopes/prayers/wishes into action, like David did with identifying a treatment for himself. The process of writing the book was a whirl of emotions for me. I had to dig back into my memories that I had tried so hard to tuck away. With David being in remission, I try to stay positive and look forward to the future, knowing very well that this fight is not over and there is still lots of work that needs to be done.