Copycats could not cope

The ides of March descend upon us every year in the form of examinations. Tensions and blood pressure run high among examinees and their parents. Board exams is the buzzword. All activity is directed towards preparation for the oncoming exams. Preparation takes various forms. The conventional mode of preparation is of burning the midnight oil. Examinees stay up late, forgo all other distracting activity and focus only on the exam. However, in recent times—and, I say recent times only because the breed of this group seems to be growing rapidly as is evidenced from what has been seen in the state board examinations in Uttar Pradesh—the preparation seems to be directed towards how cleverly one can arrange to copy or cheat, while taking the exams.

It is reported that over 10 lakh students have skipped board exams in UP in the last four days. The dropouts are close to 15 per cent of registered examinees. The high dropout rate, as per experts, is the result of strict anti-cheating measures. Obviously then, there will be a substantial decline in the pass percentage of students. It is so intriguing that the dropout rate has been as large as 2.89 lakh on day one, 2.15 lakh on day two, 2.71 lakh on day three and 2.67 lakh on day four. It is reported to be for the first time in the history of the UP board that such a large number of examinees have failed to appear for exams. 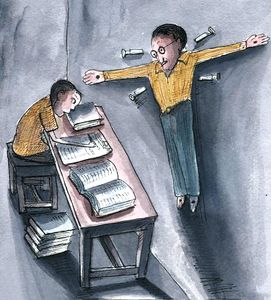 I distinctly recall that in the early 1990s, when Kalyan Singh was UP chief minister, he had clamped down very heavily on mass copying. It was rumoured that things had come to such a pass then that students would come to classroom with a knife, stick its blade onto their desks and happily indulge in mass copying. The knife on the table was to deter invigilators from even remotely trying to challenge them. In other exam centres it was so well organised that a person would come to the exam hall and start writing the answers on the black board for the examinees to copy. The latter modus operandi was employed to ostensibly bolster the pass percentage of particular institutions! Since Kalyan Singh clamped down on such unpardonable activity, the pass percentage had come down by about 14 per cent those days. However, it rose again with the change of government, with the Samajwadi Party at the helm. It had come down during Mayawati's chief ministerial tenures, too. However, between 2012 and 2017, the percentage went up again to about 80 per cent—a very sad commentary on the administrative acumen and declared aspiration of the young chief minister Akhilesh Yadav, who had taken up the reins from his father.

It is most unfortunate that the administration in preparation of the state board examinations had to install CCTV cameras in all examination centres, deploy armed police to aid and support invigilators, and issue warnings of strict action against wrongdoers. This is a downright waste of resources, time and effort. This is hardly the role of an examination conducting body, as it involves so much of negative activity on their behalf.

We need to reflect that 70 years after independence, our standards of probity and honesty have declined to such levels that merely ensuring a strict vigil in the conduct of exams leads to a 15 per cent dropout rate. When, as a nation, will we inculcate the habit of learning to play the game by the rules, and, hence, build character and not seek false mark sheets? I think the responsibility devolves entirely on parents to ensure that their wards do not take to such unscrupulous means so early in life.

Former comptroller and auditor general, Rai is the head of the Supreme Court-appointed BCCI’s Committee of Administrators.