We had recently read of the ghastly fire in a roof-top cafe in Mumbai, that took 14 lives. No sooner had public memory got over that tragic incident, the newspapers carried the screaming headline of a blaze in Bawana factory that killed another 17 people. Apparently, an explosion in a firecracker unit's basement gutted the two-storey building. It was reported that 30 people working in the unit got trapped when the fire broke out. The building had only one exit. A lone exit, in a three-storey building with a basement, that was used to pack and store firecrackers. It was later learnt that the owner had procured a licence for a plastic factory, but was running a firecracker unit instead. One of the persons who died in the blaze was a mother of six children, who had started working in the unit for Rs 200 per day to support her children. The price of a life—Rs 200! Thanks to the sheer neglect and greed of a group of people, the six children she had set out to feed were now left bereft.

When will we, as humans and those who regulate such entities, learn? Whether Mumbai or Bawana, these fires will make headlines for a couple of weeks and will soon be forgotten. It will be business as usual.

In the Mumbai fire, the restaurant-cum-pubs—Mojo Bistro and 1 Above—had only one entrance/exit. The fire department and civic authorities, who obviously were complicit, will be punished with suspension. Such stories have become commonplace. We read about them and then forget as some other crisis overtakes us. The authorities just do not seem to care. The Fire Safety Measures Act 2006 of Maharashtra stipulates that contractors procure a fire compliance certificate before they can build a structure taller than 15 metres. In the Kamala Mills fire, there was no strict enforcement of any of the safety standards. 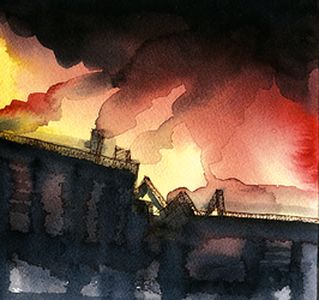 The preliminary inquiry conducted by the municipal commissioner reports: “This tragedy took place at the intersection of greed fuelled by impunity and other contempt of rules; and the failure of various agencies to ensure compliance. We will initiate a departmental inquiry against ten of our officials, including two assistant commissioners of that ward. Those guilty will not be spared.”

On the one hand we do not care for rules and norms. We take short cuts. The driving factor is greed. On the other hand are the authorities who are complicit in our taking short cuts. We just do not seem to have a conscience.

Enough warnings have been given by agencies such as the Comptroller and Auditor General that fire disasters are waiting to happen in high-rise buildings, petrol stations, sawmills and fire-cracker shops. The reports have pointed out that 78 per cent of the budget allocated to buy fire safety equipment and rescue vehicles went unused across the state between 2010 and 2015. Yet, corrective steps were not taken.

We have thus developed respect neither for laws nor authority. When officials are repeatedly found to be complicit in such negligent acts leading to such massive loss of lives, why does not the administration take exemplary action to set a precedent? This will act as a deterrent for such officers who are negligent in the discharge of their duties. The punishment that should be meted out for such negligence is dismissal from duty. This is the only punishment which will create an awareness that cutting corners to make a fast buck can indeed be very disastrous.

There is a need to create a culture of safety and accountability in the country.