My walk with Rahul Gandhi

I marvel at Rahul's focus. I think to myself ‘Pappu’ is rather erudite!

On a dark winter morning in the hinterland of Madhya Pradesh, I join the Congress’s Bharat Jodo Yatra. The walk that the Congress describes as a revolution, the BJP terms ‘paid PR’ and cautious journalists call a re-branding exercise is making its way through the length of this country, as Congress leader, Nehru-Gandhi family scion, and India’s most maligned politician Rahul Gandhi leads the way, surrounded by dozens of CRPF personnel and a rope cordon maintained by the state police.

We get to Rahul and I am introduced. A brisk handshake and the customary, “How are you doing?” “Surviving,” I answer smiling, trying to be clever. He latches onto that and begins interrogating me, finally getting to the cost of my EMIs and the brand of my car. I protest, jokingly, and he responds seriously: “No, I want to know because these EMIs are a sign of whatever your struggle is.” Over the course of the day I watch this inscrutable and intense man, now sporting a dusty beard and wavy curls, interact with people—common people and Congress cadre. I notice he is asking everyone the same question—what are you struggling with?

Media and popular discourse in India have taught us to believe that Indians love to hate Rahul, that he is an incompetent and reluctant politician. But I witness hundreds of people—sweating, pushing, pulling, yelling, falling, losing slippers and tearing clothes—in a desperate bid to catch Rahul’s attention. For his part Rahul acknowledges the crowds with waves. 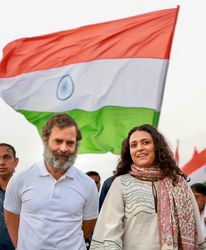 Occasionally, Rahul catches sight of someone struggling, particularly children or women, and asks his team to fetch them. Each time he points in a direction mad jostling starts. The whole scene has an undeniable element of hero worship and I cannot quite believe it. Most of the crowd is Congress cadre, but there are numerous common people. I ask him if he has always had this adulation and if it is lineage. He says, “Yes!” On the yatra he says, “It is a participative process. You won’t be able to just watch. You will be compelled to walk.” I witness that. The fortunate ones who reach near Rahul spell various concerns—“We don’t get a good price on garlic.” “There is no fertiliser available.” “Our salaries haven’t been paid.”

Rahul listens and often notices a wound or a hurt that is visible on the person’s body. “What time did you wake up?” he asks children. “Why are you so quiet?” he asks the shy one amongst a group of girls. He is inscrutable in his expression but warm and generous in giving comforting hugs and handshakes. Congress cadre weep with elation and disbelief, common people smile and their eyes shine. I wonder, if this is his effect on people, why don’t more people vote for him or the Congress? Why is his record of actual election victories so meagre? But, I marvel at his focus. Through the entire day, with hundreds of interactions, Rahul maintains the thread of our conversation, never once asking, “Where was I?”

He speaks of religion, two kinds of Hinduism, the concept of karma and how the Indian Constitution challenges that, the need for a new political imagination, how fear is the currency of power, his concept of attention, and explains the word ‘gestalt’ in the context of Indian politics. I think to myself, ‘Pappu’ is rather erudite!

Twice in the din and chaos, he catches sight of someone looking unwell in the crowd. He stops and ensures they are attended to. One man vomits, Rahul does not flinch. He limps a bit. I ask if his knee is hurting. For some days now, he says, but makes no further complaint. A little later a child asks him where he lives. “These days I live here.” He offers another child a candy. The child pops it in his mouth and throws the wrapper on the floor.

India’s first prime minister’s great-grandson and heir to India’s most illustrious political family steps back quietly, picks up the wrapper, pockets it, and continues walking.