May our hearts and minds grow with love, not shrink with hate

Since 2014, we have seen new kind of majoritarian assertion during festivals

Indians had much reason to celebrate the past week. And not simply because it was the Diwali weekend. In cricket, Virat Kohli recovered his form and led India to a nail-biting but spectacular victory in a T20 World Cup match against our favourite rival and arch nemesis Pakistan. In foreign affairs, the White House officially celebrated Diwali with a much publicised party. Kamala Harris, US vice president, reminisced about Diwali in India during her childhood. And, in a delicious twist to the cycle of political history our erstwhile imperial ruler Great Britain has a brown, Hindu prime minister of Indian descent and a first lady who is Indian. There is an atmosphere of great cheers and chest thumping in general public discourse these days, and why not! We should undoubtedly be proud of the achievements of our people, our culture and our kind.

However, the pride and joy in the 85 per cent white England having a brown, Hindu prime minister, and heads of state of foreign countries celebrating our festivals does bring into sharp relief how we have been treating our minorities past few years. This is an oft-repeated comment by any rational observer of India that post-2014 the experiences of minorities and dalits in India, especially Muslims, has been marked by bullying, violence, hate speech and terror by Hindu vigilante mobs. This unchecked culture of mob assertion and bullying that mostly goes unpunished has also infiltrated and coloured how festivals are celebrated in India.

India, with her multi-cultural and diverse population, has been blessed with the opportunity to celebrate many different festivals. And, festivals have traditionally been community affairs. So much so, that our leaders (like Bal Gangadhar Tilak) during the national movement for independence from British rule turned festivals like Ganesh Chaturthi into public affairs drawing huge community participation. Indians also have had a culture of sharing with neighbours. So, it was not unusual during our childhood to celebrate Eid at a Muslim friend’s house, or go for Christmas lunch to a Christian friend’s place. In university Holi parties our pichkaaris never discriminated or checked who was Muslim and who was Hindu. 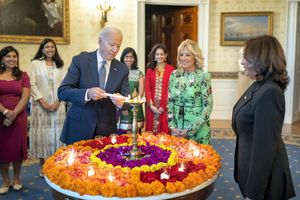 But, since 2014, we have seen a new kind of majoritarian assertion by noisy sections of Hindu rightwing on social media and active street bullying by members of sangh parivar organisations. This year we saw religious processions during monsoons in north India blare hateful songs that demonised Muslims and called for violence on the Muslim population. Across Gujarat and Madhya Pradesh during Navaratri, Muslims were singled out of dandiya evenings, IDs were checked and Muslim youth who were trying to participate in dandiya were arrested on the pretext that they were attempting “love jihad!” In one village in Madhya Pradesh, Muslim onlookers who were standing at quite a distance from a dandiya programme were arrested by police!

I was chatting with a Muslim friend over an intimate card party I hosted at home last week. We were playing with Scrabble alphabets instead of money, and lamenting the state of affairs around us like good liberals. “You know festivals have lost all joy for us! As Muslims, around festivals, we keep anticipating fearfully what new ruse will be used to bully, humiliate and terrorise us. It is like our eyes also should no longer witness Hindu festive celebrations, lest someone put a fake accusation and arrest, or worse, flog us.”

His angst is not unfounded and sadly neither extreme nor alarmist. A few weeks ago in Kheda, Gujarat, the police publicly flogged a group of Muslim men in a village on the suspicion that they were throwing stones on dandiya revellers. There was no investigation, just this Talibanesque punishment that Hindi electronic media cheered!

I sighed and opened my Twitter account. There was a hashtag trending. #NoBindiNoBusiness, targeting any business that placed an ad during festivals where female models were not wearing bindis.

I looked up and caught a reflection of myself in the mirror and thought even my small unsuspecting bindi is no longer untouched by the pettiness and mean spiritedness that has possessed this nation! May our hearts and minds grow with love, not shrink with hate.