How Swara Bhasker's nana taught her the meaning of life

Bhasker's maternal grandfather passed away on Sep 4, at 88

Nana used the word as an exclamation, an adjective, as refined political philosophy, and as the closing argument in a Supreme Court case to save the Yamuna that he argued himself!

The gibberish expression uttered with such confident swag was really a metaphor for the man. He was mischievous, irreverent, anarchic, proud, inappropriate, charming, indefatigable and always wanting the last word! 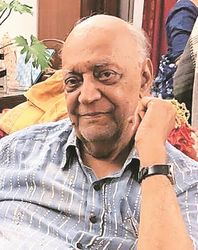 Born in 1934, my nana was the second son of a large and illustrious zamindari family in Bihar, whose seat was in the villages around Patna. The family had lost most of their wealth and assets during and after the abolition of zamindari, but by then Madan Dhari Singh’s son Sureshwar Dhari was in the Royal Indian Military College in Dehradun. In the early 1950s my nana went to the National Defence Academy and then was commissioned into the Navy. His early training took place in Dartmouth, England, as per an arrangement that newly independent India had with Great Britain and that time in England turned Sureshwar into the dashing westernised Willy Sinha who ate eggs on toast with tomatoes and bacon to the end of his days!

In 1956, he married my nani, Rama, the eldest daughter of a well-to-do Benaras-based brick-kiln owner. She was not from a zamindari family, but it was the only match (within the same caste) in all of Bihar and UP where the horoscopes indicated the birth of a son! It was a long and fraught marriage that produced four wonderful loving children (including a son) and nine grandchildren! I was the first grandchild and nana was almost 50 when I was born. By then, he had voluntarily retired from the Navy, failed as an entrepreneur, written some books and was waging a lone battle to save the Yamuna whose filthy and pathetic state he would witness each time he—a brilliant sailor—went to the Sailing Club in Okhla, Delhi. I was fascinated with my nana. He was a man with an insatiable appetite for life, love, culture, adventure and off-colour jokes. He was proud of his four children and he spoilt and indulged his nine grandchildren, never missing an opportunity to tell us tidbits on topics our parents disapproved of! My nana was open-minded, liberal and encouraging of anything his grandchildren wanted to do by way of life plans and careers, and always welcoming of anyone or anything we brought home—by way of potential partners or pets! He dedicated a good part of his active life and savings, after the age of 50, to saving India’s rivers.

My nana was a product of his time. He was proud of his family legacy, caste, religion, country and his naval journey. He was always sure of himself. He was a difficult man. My nani knew that. I began to know that, too, as I began to understand the complexities of relationships. My nana had an unbending will, but he also had a big generous heart. And he had such charm! It was so hard to remain angry with him. I know because I was so angry at him after my nani died, blaming him for her unhappiness. I vowed never to speak to him again. But, of course, each time I met him I couldn’t help loving him again.

His peaceful demise on September 4, at the age of 88, makes me realise that death lifts the final veil that clouds our perception of people we love. Almost as if losing them liberates us of our own prejudices and judgements. I learnt so much from my nana who was always so hungry for life and went about the act of ‘living’ voraciously. He taught me that whatever life may bring forth—joy or tragedy, success or failure, accolades or ridicule—it is wholesome, worth living and in the end worth embracing.

Gardumb Helaa, nana! I am sure you are getting your own way wherever you are. We love you and we miss you.