My maternal grandmother (nani) was married to my naval officer grandfather (nana) at the age of 15. She was a young bride when she arrived at the naval base in Bombay of the early sixties. It was the first time she had stepped out of her family homes in Benaras, Faizabad, Azamgarh and her marital home in Patna. She couldn’t speak English. Over the next few years my westernised nana tutored his young vernacular wife into becoming a more modern (more fitting) version of a wife befitting the dashing naval officer he was. She learnt to speak English, wear chiffon saris, bake cakes, befriended his friends and gave birth to his children.

Somewhere along the way, she met and befriended Kusum nani (name changed)—another young bride to a naval officer, R.P. Singh (name changed), the scion of a Rajput thikana (address) and son of a decorated Army general. 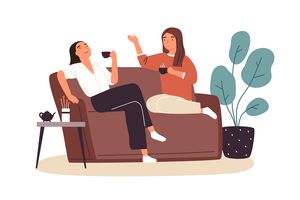 Kusum nani (we met her only when she was in her fifties and a grandmother herself) was much like my own nani. Both were beautiful, warm, vivacious mothers of four each—though perhaps Kusum nani had the instinctive gravitas of royalty which my commoner nani lacked. And both were married as teenagers to young naval officers from caste appropriate aristocratic families, who were handsome but also proud, traditional, stubborn men used to their own ways.

Kusum nani and my nani came from similar cultural contexts and, though aristocratic, they were the small town girls among the more organically ‘modern’ naval wives. They shared recipes, laughs, gossips, opinions, troubles and worries and tips for bearing their impatient husbands with equanimity. They baby-sat each other’s children when their husbands were posted together and the families were neighbours, and wrote letters to each other when they were posted apart.

Kusum nani settled in the same area of Delhi as my grandparents after RP nana retired. I witnessed their friendship as a child. The two families ended up playing Holi together. They often met for dinners. Nana and RP nana had been friends since they were cadets in the Navy. They had travelled by road from Dover in England to Delhi in 1956 and were the kind of old friends whose greatest bonding was drinking together whilst discussing current affairs, a debate that inevitably descended into a yelling match where each was calling the other “a bloody fool”. My nani and Kusum nani would shake their heads in a familiar, partly-amused-partly-exasperated nod and one or the other would exclaim—lo shuru! (It has started).

Whilst the men were yelling, they would take themselves into a quiet room and share the more real affairs. They compared notes about their childrens’ health, daughters’ marriages, sons’ prospects, husbands’ idiosyncratic patterns that were becoming less bearable as they grew older and news from extended relative circles. I would be eavesdropping and Kusum nani would catch me looking at them and say—Kya karein beta (what to do, child), men are like this only!

Kusum nani died after a prolonged period of ill health a decade before my own nani succumbed to blood cancer. My nani often visited her and always felt great pity for her friend’s poor health. She bitterly complained that Kusum nani did so much for others that it drove her to illness. I never consciously realised how enabling this friendship was for both women, how much they supported each other and held each other through life’s trials and tribulations whilst my nani was alive. On August 7, my nani would have turned 81. Kusum nani was a year older than her.

I remember them as my own girlfriends as I splotch along in the messy puddle that is adult life and I think of the beauty, strength and nurture that are inherent to female friendships. How they make the bitter truths and sour grapes that life invariably offers a little more palatable.