Rape has been tool of war for centuries globally, and men also have been victims

These past few weeks have not been great for women on the internet. A US court heard a defamation trial that actor Johnny Depp had filed against his ex-wife Amber Heard. It was, strangely, live streamed and consumed by the public as reality TV, led to a barrage of online support for Depp from his fans, and very soon, memes, videos and hashtags mocking and vilifying Heard as a hysterical liar and a gold digger emerged.

Social media was also rife with death threats to Heard, and gleeful celebration and mockery of her abuse in what felt like a medieval witch-hunt. Unfortunately, the jury had access to the internet throughout the trial. In a bizarre judgement they ruled that both Depp and Heard had been defamed but ordered that Depp receive substantially more compensation than Heard. 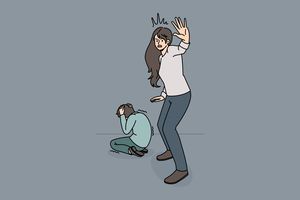 Back home in India, we saw a split verdict on the marital rape case in the Delhi High Court, and witnessed an order by Justice Hari Shankar that disturbingly seemed to suggest that husbands may, kind of, have the right to force sex from their wives! This was hotly debated and denounced by feminists and explained away by some.

But the experience of what Indian women have to put up with in public discourse hit a shocking rock bottom when a company released advertisements for their deodorant, Layer’r Shot, which had gangrape jokes! Both ads show a group of boys moving towards a single girl in a threatening manner and asking one another with swag, “Should we take a shot?” and, “Did you take a shot? My turn now.” The girl looks scared but the joke is that the boys are referring to the deodorant, which is placed in the frame. Outrage on the internet led to the ministry of information and broadcasting ordering YouTube and Twitter to pull the ad, but uncomfortable questions linger.

How did people in the creative business, nay, how did any basically decent person think that this was a script or idea that should be approved? Advertisements are not made by a single person. Many teams of many different companies are involved. A gangrape joke was thought of and written, then conceptualised, greenlit, cast, produced, shot and aired for public consumption. And not a single person from the minimum 50 adults who worked on this ad thought this was inappropriate, tone deaf and quite simply criminal?

I now feel that every fortnight in these articles I am beating the same drum, asking the same question of our society—what have we become? How did we come to this? Who are we?

I feel like a stuck record droning on the same tired tune. It is really just helpless rage. Every incident that I have mentioned is not simply an example of how women are mistreated, violated or repeatedly denied their personhood and humanity; they also point to how dehumanised we are as people to be so totally blind and deaf to sexual assault, abuse and gender violence. And a culture where normalised and prevailing social attitudes and collective consensus trivialises or worse ‘un-sees’ sexual abuse and gender violence is known as a rape culture.

One cannot live in a society and a world that is steeped in centuries of patriarchy and be untouched. Rampant rape cultures do not just harm women—men suffer, too—as we have witnessed in the alleged gruesome custodial rape and torture of a Muslim man mistakenly suspected of cow slaughter in Uttar Pradesh’s Badaun.

Rape has been used as a tool of war throughout the centuries across the world, and ‘bad’ women have been raped to teach them a lesson. Men, too have been victims to such a mindset. Reports of custodial rape and sexual assault of male prisoners are abundant across the world. India is familiar with such cases and our refusal to ratify ‘The Convention against Torture and Other Cruel, Inhuman or Degrading Treatment or Punishment (the “Torture Convention”)’—as adopted by the General Assembly of the United Nations on December 10, 1984—suggests a disturbing reality.

So the next time you hear a man say, ‘Oh, these feminists are always complaining!’ Do remind them, we complain on your behalf as well!