One of my all-time favourite novels is A Suitable Boy by Vikram Seth. The expansive novel, set in a fictional province in newly independent India, is a compelling tale of love, family, aspiration and an examination of the opposing tugs of tradition and modernity that still characterise ‘Indian-ness’ even 75 years after Independence and 29 years after the novel was first published in 1993.

One of the central tracks of the novel is the love story of 19-year-old Lata who falls in love with her classmate, a young Muslim boy named Kabir. Lata’s paranoid and overbearing mother, Rupa Mehra, is keen to get Lata married to ‘a suitable boy’ from their own caste and the novel ends when Lata rejects her broken-hearted Muslim boyfriend to marry a man chosen by her mother. 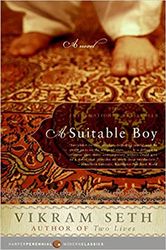 I have read the novel thrice and I have felt deeply unsettled each time. I think it is primarily because Seth has told a tale so authentically Indian, created a world so familiar, and brought to life characters so close to who we are as people; that in their flaws and fragilities I recognised my own shortcomings and witnessed the truth of our society.

Rupa’s desire for a same-caste Hindu husband for her daughter is nothing other than the casual and unconscious bigotry that has caused India to become what it has today—a country that allows majoritarian mobs to publicly break the law of the land and commit hate crimes with impunity.

India in 2022 is a land where lynching has become commonplace. Controversies and conflicts are manufactured out of non-issues like hijab or halal meat, and then used to deny Muslims basic constitutional rights. Mainstream electronic media panders to the mobs and anchors spend hours justifying and what-about-ing atrocities and transferring blame on the victims. But what is the connection to Seth’s epic novel?

I feel the character and mentality of Rupa is an accurate signifier for a very large majority of the Hindu population of our country—good, decent, virtuous people of high personal integrity, dutiful, polite and civilised in conduct, educated—some more so than others, and unlikely to commit any grievous crime. But undeniably also bigoted and prejudiced against minorities; and disapproving of inter-marriage among religions and castes.

A survey on tolerance and diversity found that more than 60 per cent Indians also disapproved of inter-faith and inter-caste marriages.

At the heart of this refusal to marry outside one’s community is a latent bigotry and conservatism that a majority of Indians (of all communities) nurse casually. For decades this prejudice was well concealed in the lip service we paid to the constitutional principle of secularism and fraternity in public. In recent years, prejudice and bigotry has reached a point where too many Hindus are indifferent to the crimes that are committed in the name of their gods. Why are more Indians/Hindus not invested in communal harmony and fraternity? India’s diversity has, for centuries, coexisted in a segregated manner. Had we inter-married between communities and across castes more, would our social fabric have been stitched together in a more organic manner? It would not have been so easy then to ‘other’ minorities and dalits because who knows, some of them may have been a fun uncle, or beloved aunt. Perhaps then the average Hindu would have cared about houses being bulldozed. Inter-married families would have been advocates for peace, social harmony and fraternity.

During the constituent assembly debates from 1946-49, Hansa Mehta and Rajkumari Amrit Kaur had proposed the ‘right to marry’ (anyone of your choice) to be included in our list of fundamental rights guaranteed by the Constitution. They were the only two women in the committee. Every single man present, notwithstanding ideological preference, rejected the proposal.

As I scroll through Twitter trying to avoid seeing videos of hapless Muslims being abducted by terrorists called cow protectors, I wonder if the ‘right to marry’ was guaranteed to Indians and more Latas had married more Kabirs; would the Rupas of India then have been more invested in peace prevailing in our country?