Swara Bhasker on a festive season amid calls for boycotts, bans by Hindutva goons

Festivals around the world are occasions to share joy, food, celebration, resources and a common humanity. India is blessed with many festivals and a diverse population celebrating them at a community level. It has always been a fairly commonplace practice to see friends and neighbours of a religion participate in festivities of a different religion. I remember all through childhood and college Muslim friends coming home for Holi and Diwali, us visiting them for Eid, and everyone celebrating Christmas because well… which child doesn’t want gifts from Santa Claus?

Increasingly though, since the rightwing takeover of the social media space in India, festivals, too, have been saffronised and the quarrels have been rampant. The first targets were Bakrid and Christmas. Every Bakrid RW handles can be seen posting hollow virtuous posts about how cruelty to animals must be prevented. They conveniently forget that slaughtering goats has been a practice among many Hindus on Dusshera in India and Nepal. The tacky biryani jokes are unending. 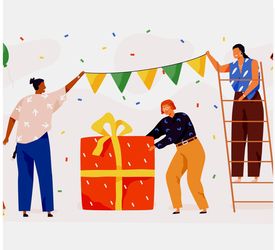 Celebrating Christmas was long maligned as a sign of the domination of western culture, and a conspiracy of the Vatican to take over the world (one gift from Santa at a time). In the very first year of the Modi era, the government attempted to disrupt Christmas festivities by announcing that hereon December 25 would be celebrated as ‘Good Governance Day’ to mark the birthday of former PM Atal Bihari Vajpayee. It even announced that schools would remain open but took the decision back after outrage from the public.

It seems awfully petty to me to be attempting to disrupt festivities of a religious community with banal bureaucratic inventions or animal love tokenism, but then again I never quite caught onto the bigotry-is-so-cool trend. This pettiness characterises all bigots around the world—be it the destruction of the Buddhas of Bamiyan or the we-will-shut-your-meat-shops-during-Navratri (but only if you are a non-Hindu) hindutva hooliganism. Majoritarian bullying has seeped into every expression of public festivity in India, especially in the media.

In 2019, Surf Excel faced backlash from RW over an ad promoting Hindu-Muslim amity, with accusations that it promoted the concept of ‘Love Jihad’ and gave primacy to namaz over Holi. #BoycottSurfExcel began to trend.

In 2020, Tanishq pulled out an ad promoting religious harmony, which depicted a Muslim mother-in-law organising a baby shower for a Hindu daughter-in-law, after RW social media ecosystem accused the brand of promoting Love Jihad.

In October 2021, FabIndia pulled out an online campaign that termed ‘Diwali’ Jashn-e-Riwaaz. This time the RW brigade accused FabIndia of attempting to ‘Islamise’ Diwali by ‘Urdu-ising’ the name of the festival. Dabur pulled out an advertisement that depicted a lesbian couple celebrating Karwaa Chauth using the tagline ‘Glow With Pride’ after RW attacked them complaining that the brand had maligned the Hindu idea of marriage and festival.

It feels odd to approach the festive season with this bitter after taste of boycotts and call for bans and policing of festive expression by Hindutva hooligans. News from Gurgaon of a namaz gathering being disrupted by Bajrang Dal hooligans chanting ‘Jai Shri Ram’ starts circulating. I feel dispirited and dejected. When did we become a country of such brute majoritarian bullying?

I am surrounded by such gloomy thoughts when my phone beeps. A dear friend who happens to be Muslim texts.

I reply, “Not feeling very Diwali-ish!”

Pat comes her reply, “Uhhhhhh… excuse me! Are trying to avoid giving me a Diwali gift?”

I break into a smile unwittingly. “I don’t remember getting my Eidee from you this year.”

I chuckle as I type an affirmative response thinking, if nothing else, rampant consumerism will prove to be the biggest challenge to rampant bigotry!

Maybe the childish innocent greed for gifts will rescue the festive spirit of sharing in these petty times.