The recent acts of violence by Israel on Gaza Strip that began with an attack by the Israeli forces on Al-Aqsa mosque in Jerusalem, following attempts to forcibly evict Palestinian residents have generated a huge debate. The disturbing news reminded me of a trip I took in December 2010-January 2011. I was part of the first Asia to Gaza Solidarity Caravan, which united citizens and activists from 13 Asian countries in a solidarity land caravan travelling (by buses) from New Delhi, crossing the Wagah border into Pakistan, then onto Iran, Turkey, Syria, Egypt and finally to Gaza, Palestine. We were supposed to be carrying medical aid and money that we had collected from our various countries and were to deposit this into the hands of the governing Hamas in Gaza.

It was a long journey with a motley group from various Asian countries; India, unsurprisingly, brought the largest delegation. We entered Gaza by the Rafah border with Egypt, and were deposited in a surprisingly comfortable hotel. As guests of the local government of Hamas we had a strict schedule—meet orphans and widows, visit a memorial to those who died in the various attacks Israel has launched on Gaza since its inception.

Some friends and I managed to bunk the ‘official schedule’ and took off to see ‘real Gaza’ and meet Gazans with three young Palestinians we had befriended—Fady, Kamel and a lovely free-spirited girl called Besso. They took us through the streets of Gaza. I noticed the seemingly ceaseless construction projects and asked about them. “It is because Israel keeps bombing us and our buildings,” said Besso. This was only the first of many shocking realities that our Palestinian friends lived with cheerfully. 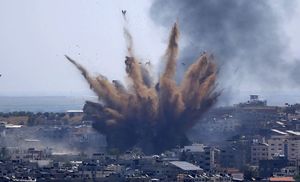 Facing a land, air and sea blockade since 2007 (that continues to date), all products—from underwear to wedding gowns, from food to oil and vehicles—were smuggled into Gaza through tunnels from Egypt. And yet, Gaza had two malls! In 2010 the tunnels were controlled by Egyptian smugglers on one side and the Hamas on the other.

We went to the Islamic University of Gaza, met students and teachers and learnt that Israel always targets university buildings, research centres and hospitals—keeping Palestinians in an extended state of wounded half-literacy. It stung to see enthusiastic students trying to grab every opportunity to learn despite the limitations placed on them by a cruel, all-powerful neighbouring enemy and the authoritarian tenor of Hamas’s governance. So many told us that they dreamt of studying abroad but could not leave because of the blockade.

We lunched at a surprisingly beautiful restaurant. It felt surreal eating a delicious fusion shawarma sandwich, sipping lemon ice tea in what the internet describes as ‘the most dangerous place on earth’.

Finally, we went into the controversial ‘buffer zones’ that mark the land between Gaza and Israel, where ‘no one’ is allowed to go.

We met a Palestinian potato farmer who lived at the edge of a buffer zone, his hutment as precarious, solitary and fragile as his existence. Every day, he stepped into the zone in full view of the Israeli ‘wall’ to tend his meagre crops. “What if they shoot you?” we asked. “What can I do? I cannot leave my crops,” he shrugged. Three days after we returned the potato farmer had been killed in a routine shelling by the Israelis. Just one more statistic in the unending list of Palestinian casualties.

That night we walked on a Gazan beach under the occasional hum of the F-16s. Jehad, a young Hamas volunteer with sad eyes, turned to me, “We are trapped here. We can never leave but we can die anytime. It is like living in an open jail. Is the world blind? Can they not see our pain?”

As I watch the heavily biased coverage of the latest Israeli attack in mainstream media replete with problematic false equivalences between two obviously unequal sides, I can only think of Jehad’s words and conclude that the world is in fact blind.