Until the devastating second wave, I had never stepped into the kitchen. So, with both Bikesh, our cook, and my mom temporarily incapacitated with Covid-19, I decided this was a chance to do penance for my past domestic hedonism. As my dad and me tried to run the house without Ma, I told my dad to chill, and that I would handle the kitchen. He looked amused and said, “I’ve given your mother and Bikesh breakfast, you do lunch. There’s parwal (pointed gourd) in the fridge, so how about aaloo parwal?” I nodded with more confidence than I deserved to possess on matters culinary.

I entered the kitchen armed with YouTube on my phone and began to watch a recipe. It mentioned that you had to boil the potatoes. I realised I didn’t know how to. I googled. In a pressure cooker, said Google. I didn’t know where it was. I gingerly asked my dad who looked smug and came and pulled out a pressure cooker from a drawer I did not know existed. “The handle is broken,” I said, a faint pettiness creeping into me. “Too bad,” retorted my dad. It was now a matter of pride. 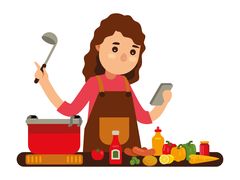 I followed the instructions on Google; while the potatoes boiled, I began to chop the parwal and fry it. I put too little oil and the parwal became squidgy. I added oil. Cold oil into the inadequately sautéed parwal. Dad, the soothsayer, appeared at my shoulder. “I may not know how to cook, but I sure know that if you add cold oil to hot oil with sabzi in it, the sabzi will taste odd,” he said gravely.

“Please go away, dad,” I hissed! I looked in the fridge for fresh parwal, but alas there were none. I cursed softly. Godot, our dog, appeared in the kitchen, his frown lines and cocked ear predicting a culinary doomsday. I offered him an oily parwal. He sniffed at it tentatively, summarily rejected it and trotted out of the kitchen. Desperate, I had a brainwave. I washed the parwal with warm water. Now it was oily and wet. Text from Ma, “Everything okay, beta? I can talk you through making parwal on a video call.”

Of course, dad must have snitched on me. “All good, ma. Just rest.” And a thumbs up was the reply. I exhaled. There was a hissing sound. I started. The damn potatoes! I examined the cooker and realised that the rubber on the lid was cracked. In the cooker were six singed potatoes and very little water. Shit! Dad reappeared on the horizon. He was holding an A4 size paper that said: We can order.

“No need, dad. Please leave me alone!” This was now war!

I scraped away the burnt portion of the potatoes and found that I had a palmful of potato mash that was cooked and edible. My washed parwal was there, too. I went back to YouTube and began to follow the remainder of the recipe carefully. Soon, a somewhat familiar aroma rose from the kadhai. No disasters it seemed. The aaloo parwal was ready. It looked familiar, but sloppy! And it was barely enough for one person. I looked at my watch. This took me 45 minutes!

Dad reappeared. “What will we eat the vegetable with? You have to prepare that, too.”

Prepare, the word, got stuck in my head. I had a Newton moment. Prepare. I do not need to cook. Prepare: to make ready. I took my phone and texted a friend who lives in the colony.

“Have you guys cooked? Can you make some extra dal, chawal and sabzi and send it to my place. Mom and cook down with Covid.” Sad smiley added. In half an hour there was fragrant Bengali cuisine in neatly packed vessels lying on my dining table.

My father video-called my mother, smug as ever. Ma saw the food and exclaimed in doubt primarily, “Did you cook this, beta?”

The second wave exposed numerous failures. Some structural and moral as in the case of the government. Some personal and culinary as in yours truly!