A column on Mahatma Gandhi, I thought as I opened my laptop to write this column, calculating that it would be apt since October 2nd is approaching. Just then, while trying to google something, my eyes caught a news update. The survivor of the Hathras gang rape had succumbed to her gruesome injuries in Delhi, 15 days after the horrific incident. I began reading the on-the-ground reportage of the incident and my head began to swim.

A 19-year-old dalit girl who had begun her day as she did every day—cutting grass in the fields. A mother who noticed her daughter missing and exasperatedly thought she would give her “two slaps”. The daughter’s pair of slippers and a mud trail in the adjacent field belonging to upper caste Thakurs. The mother discovering her daughter’s brutalised body—eyes bulging, tongue cut off, spine damaged and vagina bleeding. But this would be only the beginning of the horror.

The apathy, criminal negligence and then wilful attempt to deny the gruesome crime by the Hathras administration and Uttar Pradesh Police are a sinister example of the privileged closing ranks behind the privileged—no matter what the crime is.

The Hathras gang-rape survivor ought to have died—or that is what the rapists and the rape deniers in the UP administration had calculated. She could not speak, no one would find out. Everyone would be safe. But the girl fought and lived for 15 days. And, despite her cut tongue, she spoke! She named the men who brutalised her. (They were her upper caste Thakur neighbours, who had previously also attacked the dalit family violently.) 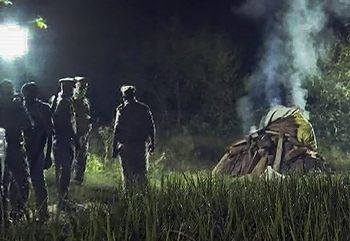 Police cremate the body of the Hathras gang-rape victim in the wee hours of September 29, 2020 | PTI

The girl’s voice reached some persistent journalists. And, when they spoke—in an act almost metaphoric in its symbolism—Akanksha Kumar, Nidhi Suresh, Tanushree Pandey and Rohini Singh became the voice of that brutalised tongue-less girl. Their relentless reporting and tweeting amplified the case on social media; and, mounting pressure ensured that the accused rapists were arrested. However, once the girl died, the UP Police and Hathras administration were back to their callous cruelty. The family of the girl was not allowed to have her body; her father and brother were detained; and the girl’s body was forcibly burnt against the family’s wishes and religious beliefs.

This case reads like a terrible film from the 1980s—the ones that fetishised sexual violence upon women for thoughtless consumption by male audience. It is nauseating that this is the reality of India in 2020. But, perhaps, what was more nauseating was the initial denial by the state administration that the brutal gang-rape had even taken place.

Once that was undeniable, some on social media and TV began to actually debate on whether the girl’s tongue had been chopped by the rapists or had she bitten it herself in trauma; had her spine been broken or was it an injury induced by the choking? This is the horrifying reality of our mindset that is reflected in this debate, that we as the “dominant mentality” do not even acknowledge the brutalised dalit female body—its reality, its existence, its narrative—and the fact that her body was tortured and disfigured by men drunk on the monstrous unaccountability of caste privilege.

How does it matter, the technicality of how the girl lost her tongue or spinal function? Should not the basic fact that a dalit was gang-raped, by her privileged Thakur neighbours (who have a history of caste violence), so brutally that she became paralysed, lost her tongue and eyesight, shake us out of our caste denial?

The denial, by the privileged, of the sufferings of the oppressed is perhaps one of the most invisible, but violent actions—in every age, in every geographical context. We would rather not face the “inconvenient truth”, and so we deny!

We choose to believe a lie rather than face inconvenience. And so, for any real change to take place—perhaps before we demand death for the rapists and justice for the girl—we would do well to start with changing ourselves and stop being caste deniers. After all, as Mahatma Gandhi said: “Our greatest ability as humans is not to change the world, but to change ourselves.”