Eliot, you were so accurate

2019 was a bad year for me. Instagram seemed to agree that 2019 sucked for the world in general, too. I was looking forward to 2020, thinking that magically 2020 will bring with it glad tidings. Instead, the year kicked off with an attack by masked goons on the JNU campus and riots in Delhi, and was soon enveloped in a Corona-related dystopia.

Some weeks ago I couldn’t bear it anymore. I just wanted to go away from this dismal reality to a different reality. To a world not perfect, but one not so devoid (seemingly) of any public ‘good’.

I wanted comfort from someone wiser; someone who knew about the trials and tribulations of human life; someone who would tell me that ultimately the good in us, humans, triumphs. 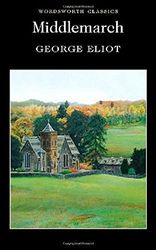 I turned to George Eliot. She had a... yes, she. Eliot was a woman. Her name was Mary Ann Evans and she wrote under a pseudonym. She had a deliciously wry eye with which to observe human flaws and failings and an empathetic understanding of human nature. I picked up Middlemarch, and began to read the sprawling Victorian novel touted as her greatest work.

Set in a provincial Victorian town, the novel is woven around the lives of Dorothea and Lydgate and their ill-matched marriages. But what brings the novel to life are the other characters who breathe relatable life into the story—even 148 years after its publication. I was soon lost in the tapestry of Eliot’s world and captured by how many of her observations were so accurate in describing our world.

“Women were expected to have weak opinions; but the great safeguard of society and of domestic life was that opinions were not acted on. Sane people did what their neighbours did, so that if any lunatics were at large, one might know and avoid them.”

Who can say this isn’t an apt critique of our own ‘middle class mentality’?

“But this vague conviction of indeterminable guilt… had for the general mind all the superior power of mystery over fact. Everybody liked better to conjecture how the thing was, than simply know it; for conjecture soon became more confident than knowledge, and had a more liberal allowance for the incompatible.” This seems like a description of public opinion around Sushant Singh Rajput’s death and the numerous conspiracy theories it has spawned.

But, perhaps, it was the different fates, different disappointments and different failures of each of the characters that in a strange way assuaged so many of my own anxieties. Dorothea’s failed first marriage made me forgive myself for my own love-life mistakes. Her happy second marriage to the man she loved made me believe that finding both love and peace was possible.

Lydgate’s failed marriage I took as a lesson and his own anxiety about his career made me look kindly upon my own career achievements. Mary Garth’s fortitude gave me strength and Mr Farebrother’s stoicism served as counsel. Rosamond Vincy’s shallow, remorseless, callousness helped me understand a deep pain from my past, and Celia’s practicality made me think I should cultivate some myself.

Bulstrode’s past made me think of how weak humans really are, and Dorothea’s sheer goodness and resolve made me feel that there is something about our humanity that yet redeems us. But, really, what proved to be most affirming for me were Eliot’s sweeping but poetic words about what really redeems the human civilisation; the closing lines of the book:

“…For the growing good of the world is partly dependent on unhistoric acts; and that things are not so ill with you and me as they might have been, is half owing to the number who lived faithfully a hidden life, and rest in unvisited tombs.”

And so may the unrecognised goodness of the hidden faithful triumph; for (to recall Yeats) the rough beast that was slouching towards Bethlehem may have been born.