What makes Indians succeed in the west

Shashi Tharoor looks at the rise of the Indian diaspora

This past year, the ascent of Rishi Sunak—a brown-skinned, cow-worshipping Indian—as prime minister of the UK has been enthusiastically celebrated. More strikingly, it serves as another reminder of the prominence of the Indian diaspora in the western world.

This has been evident in the private sector, where executives born and raised in India have been selected to head major multinational corporations. Indra Nooyi of PepsiCo, Satya Nadella of Microsoft and Sundar Pichai of Alphabet (Google’s parent company) are perhaps the three best-known examples of Indian talent at the top of globe-straddling American companies.

Yet they represent a very partial set of names. According to Standard and Poor’s 500 index, no fewer than 58 companies are headed by CEOs of Indian origin. This is despite the retirement of Nooyi and former Vodafone head Arun Sarin, the sacking of Twitter chief Parag Agrawal and the death of Anshu Jain, formerly of Deutsche Bank and Cantor Fitzgerald. The list of current Indian CEOs ranges from technology powerhouses like Adobe (Shantanu Narayen) and IBM (Arvind Krishna) to coffee giant Starbucks (Laxman Narasimhan), courier service FedEx (Raj Subramaniam) and even French fashion house Chanel (Leena Nair). 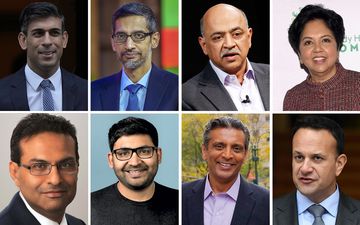 The phenomenon has crossed over into politics, too. In recent years, politicians of Indian descent have risen to head governments in Portugal (Antonio Luís Santos da Costa  has been prime minister since 2015) and Ireland (Leo Varadkar, prime minister from 2017 to 2020 and again from December 2022). In the US, Vice President Kamala Harris had an Indian mother; a potential Republican contender in 2024, Nikki Haley, has wholly Indian parentage. With Sunak and Varadkar, Europe faces the piquant situation of the thorny post-Brexit issues between England and Ireland being negotiated between two leaders of Indian origin!

What makes Indians succeed when the companies and institutions they head were created in the west, the systems they rose in were devised in the west, and there is no shortage of local talent honed in the west?

Some explain it in terms of Indians’ familiarity with, and education in, English, giving credit to two centuries of British colonial rule. But language alone is hardly a guarantee of success. And in any case, it does not explain Indians’ success in non-Anglophone European countries like Portugal. Others speak of the extra energy and drive that emigrants bring to their new countries. True enough, and Indians seem to outstrip other immigrant populations. In the US, for instance, Indians have the highest per capita income of any ethnic group.

First-generation emigrants from India have grown up without taking affluence for granted; they have experienced or seen enough deprivation to strive to escape it. They have the “fire in the belly” that many in the west may lack, and out-compete others in their aspiration to succeed. They have also overcome adversities in India that their western counterparts have not, including scarce resources, shortages, limited facilities, government over-regulation and bureaucratic inertia.

Indians are also used to living with diversity; our history and India’s pluralist social environment exposes them to working with people of different languages, religions and cultures. Managing working relationships in a multinational corporation comes easily to them. Growing up in India, these young men and women have imbibed the habits and values of individual initiative and original thinking within a framework of polite behaviour, respect for elders and adherence to hierarchy. This Indian combination of attributes makes it easier for them to fit in.

The irony is that in today’s India, diversity is under threat from chauvinist hindutva hyper-nationalism; uniformity and obedience to the new national narrative trump individual freedom of thought and action. It is sobering that the virtues today being hailed as triumphantly Indian around the world may soon be present more in the diaspora than at home.