A new world order is in the making

Deglobalisation is in, democracy is out

As we near the end of the year, some geopolitical trends are becoming apparent. One is the growing tension between the US and an increasingly assertive China under President Xi Jinping. Interestingly, the highly polarised US electorate seems largely to concur with the tough policy towards Beijing, promoted by both former president Donald Trump during his time in office and now by President Joe Biden. In 2011, only 36 per cent of Americans viewed China unfavourably; this year, it is a remarkable 82 per cent. This means that the onset of visible and bristling hostility towards the other rising superpower has been welcomed and endorsed by the American public.

A second geopolitical trend that cannot be escaped, and which I had drawn attention to in this space last year, is the accelerating pace of deglobalisation. There is no doubt that the perception of growing economic inequality in western countries has intensified, seriously adding to the unpopularity of what until recently had been the conventional wisdom, that globalisation was both unavoidable and welcome. The world economy had thrived since globalisation began in 1980 on an open system of free trade. That had already been shaken by the financial crash of 2008-09 and the American trade war with China. The pandemic has exacerbated these challenges, with estimates suggesting that nearly a third of global trade fell in 2020, though a gradual recovery trajectory was starting to emerge before the setbacks caused by the Ukraine war. Meanwhile, the pressure to “decouple”from China was increasing in the last two years, even as the sanctions on Russia have severely restricted trade, investment and financial flows into and out of that country. 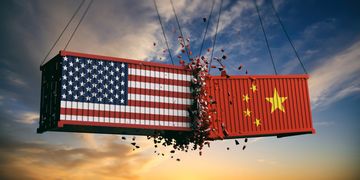 In a recent survey conducted by research firm Edelman, a majority of respondents across 28 leading economies agreed that “globalisation is taking us in the wrong direction”. In its 2019 survey, only 18 per cent of respondents affirmed that “the system is working for me”, with 34 per cent being unsure and 48 per cent declaring that the globalised system is failing them. As sovereignties are reasserted across the world, and treaties and trade agreements increasingly questioned, multilateralism, the once taken-for-granted mantra of international co-operation, could be the next casualty.

In parallel, support for democracy has weakened, even in America and especially among the young. Political scientists Yascha Mounk and Roberto Stefan Foa reported in 2017 that while 75 per cent of Americans born in the 1930s agreed it is “essential to live in a democracy”, the figure was just 28 per cent among millennials. Similar trends can be seen in many other countries.

Populist leaders like Trump, who rose to the presidency of the United States on slogans of “America First”and “Make America Great Again”, and a host of others—from Jair Bolsonaro of Brazil and Recep Tayyip Erdogan of Turkey to Viktor Orban of Hungary and Narendra Modi of India—successfully persuaded their voters that they were more authentic embodiments of their nations than the allegedly rootless secular cosmopolitans they sought to displace. Others have been rising, from the Alternative für Deutschland in Germany and the Freedom Party of Austria to the Party for Freedom in the Netherlands and Marine Le Pen and Eric Zemmour in France, none of whom have won national elections but who came close enough to shift the national discourse. Of course, it is true that Trump and Bolsonaro have since suffered electoral setbacks, but most recently, Giorgia Meloni, Italy’s most right-wing leader since Mussolini, and Israel’s Benjamin Netanyahu have come to power heading extremely right-wing governments. It is useful to realise that, in a survey last year, Italy had the world’s second-highest dissatisfaction rates with democracy (after Greece). But together such parties and leaders, combining nationalist fervour with a determined articulation of popular prejudices, have restored nationalism to its place as the default model of national self-definition.

The auguries are not promising as the world contemplates the New Year.