When I entered the race to become president of the Indian National Congress, one of my key campaign themes was to increase our party’s emphasis on youth. As the immortal Rajiv Gandhi once memorably said in his famous address to a joint meeting of the US Congress, “India is an old country but a young nation… I am young and I, too, have a dream, I dream of India strong, independent, self-reliant, and in the front rank of the nations of the world, in the service of mankind”. In the three decades that have passed since his tragic passing, that characterisation of India and our youthful demographic remains truer than ever and must be a core focus area for the Congress party.

Today’s ruling dispensation often speaks about building a new India but any conversation on this topic must begin by looking at the interests of India’s future, our youth. After all, who else are we building this ‘New India’ for if not the young? We have trained world-class scientists and engineers, but 431 million of our compatriots are illiterate, and we have more children who have not seen the inside of a school than any other country in the world does. We have a great demographic advantage with the majority of the population under 25 and a startling 65 per cent under 35. This is potentially a young, dynamic labour force and could deliver to us that demographic ‘dividend’ so often proclaimed across global platforms. China, Japan, and even South Korea (our major East Asian competitors) are facing a serious demographic squeeze, and the rest of the world is ageing. India’s youth should not only be part of India’s development, but drive it.This requires us to provide our young people with both education and employment opportunities on an unprecedented scale. This is not happening. 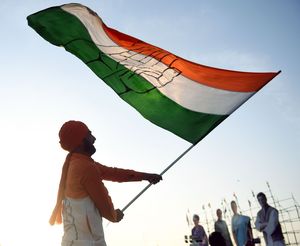 Young people may be celebrated as bhagyavidhatas by our prime minister, but their current reality is one of shrinking opportunities. Record lows in job creation are compounded by a depressed economy still recovering from the devastation of the pandemic, the negative effect of demonetisation and the rushed implementation of GST, and now the inflationary consequences of the Ukraine war. And recent policy measures, including government promises to create just 12 lakh jobs a year in a country where 5.30 crore are currently unemployed and 47.5 lakh job seekers enter the market each year—suggests that the government is unlikely to turn things around.This grim scenario represents both a cause and an opportunity for the Congress. For the INC to start winning again, we can and should appeal to the large untapped political potential of unemployed youth, youth-heavy workplaces (notably the IT sector) and migrant hotspots. To take back the technocratic leadership of the nation, Congress has a large role to play via job fairs, skilling expos, and developing industry collaborations.

Our youth focused party bodies like the National Student’s Union of India (NSUI) and the Youth Congress must lead the way in these efforts and play a critical role beyond the good work being done by these frontals in organising large nationwide movements and mass protests. To strengthen their capacity, we need to embark on a meaningful revamp to make these and other Congress frontal organisations like Seva Dal our focus of attention for youth issues. Young Indians must believe we understand their aspirations and can be trusted to promote them in government.It has been painful to see the struggles of young India being reduced to rhetoric with little thought for their realisation. When the dust settles, the youth are left on the margins, mere observers to economic growth. Ad hoc policies to improve the opportunities available for India’s youth are clearly insufficient for the size of the problem that we are facing, let alone what it can grow to in the future.

We in the Congress must work to include young people in India’s development by ensuring that their skills are developed, their aspirations understood and their voices protected. We need grown-up economic management, not slogans and sound-bites. The Congress must truly become the party of young India.