Rarely has the Indian public been as interested in a British prime ministerial election as this year. The reason is not hard to find: among the two finalists whose names are being put to a ballot of all the nearly 1.8 lakh members of the Conservative Party is Rishi Sunak, the Indian-origin former chancellor of the exchequer. Sunak, a bright, articulate, England-born and expensively educated multi-millionaire who also happens to be married to Infosys’s Narayana Murthy’s daughter, Akshata, has conducted an impressive, slick campaign that saw him consistently lead the pack throughout many rounds of balloting among Conservative MPs to determine the final shortlist of two. And, yet, he is trailing his rival, Foreign Secretary Liz Truss, in every poll of Conservative members, even though Truss is much less bright and well-spoken and barely squeezed through to the final round (after trailing in third place throughout the balloting).

Many reasons are advanced for why Sunak seems about to lose the race among the Tory members (who are generally more conservative than the MPs): Sunak’s unpopular tax increases, the revelation that his wife was not paying UK taxes on her considerable Indian income by claiming “non-domiciled” status, and the fact that even as a British cabinet minister he retained a US green card, acquired during his years working in that country. (None of these breaches any law, though in politics appearances are often more important than legalities.) All this adds up to a perception of him as the embodiment of cosmopolitanism, competence, and technocracy, qualities reviled by Brexit-loving Tory culture-warriors. Some have even claimed he comes across as arrogant and overbearing, but “Dishy Rishi” is genuinely modest in speech and manner, even though he has much to be immodest about. So why, then, is he trailing in the polls, when his own peers in parliament consider him the most qualified MP? 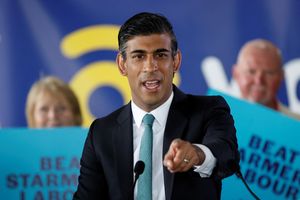 Very simple. Sunak’s main problem is something that no British commentator is prepared to concede. He is not white. No one likes to admit that such considerations exist, because saying so is seen as politically incorrect in these supposedly enlightened times. But they are fundamental. No one should underestimate the lingering racism of the general British public. As the brown-skinned son of immigrants who is openly and unapologetically Hindu, Sunak, despite his upper-class British accent, cannot hide his foreignness. To many white Britons, he just isn’t one of them—and never will be.

So when results are announced on September 5, Truss will probably be prime minister, and Sunak fobbed off with the consolation prize of a key ministry—perhaps foreign affairs, maybe home (the exchequer, which he relinquished during the political crisis that brought down Boris Johnson, is now with another brown man, the Iraqi-Kurd-origin Nadhim Zahawi). No one will say it, but the unspoken realisation across the country will be that Britain still is not ready for an Indian prime minister. Still, Sunak has brought the Indian community in Britain a long way towards the highest office in the land. It is a journey that began in 1892, when Dadabhai Naoroji, the Indian nationalist who authored the “drain theory” about British colonial exploitation of India, stood as Liberal Party candidate for Central Finsbury and won. Two other Indian Parsis, one the pro-empire Mancherjee Bhownaggree, the other the communist Shapurji Saklatvala, were also elected in the early 20th century. But they remained curiosities, and none of them had a particularly long or illustrious parliamentary career. None ascended to any prestigious positions in government.

Today, the picture is very different: people of Indian origin have, astonishingly enough, held two of the four “great offices of state” (home, finance, foreign affairs and prime minister). The other two posts no longer look out of reach.That is remarkably impressive, as evidence of how far Britain has come from the unabashed racism of its colonial past. Let us not forget the xenophobia with which some Indians reacted to the prospect of Italian-born Sonia Gandhi becoming our prime minister in 2004. We, too, have prejudices to overcome, so even if he loses on September 5, let us applaud Britain for Sunak even having come so close.