In India, no party has mechanism to recall a leader like Tories did with Johnson

Amid all the drama and sensation of Boris Johnson’s resignation as prime minister of Great Britain, and the catalogue of misjudgments and follies that precipitated it, one aspect no one seems to have raised is staring us in the face—the absolute unlikelihood of anything like this ever happening in our country.

Think of it: just two and half years after leading his Conservative Party to a resounding victory in the general elections, and less than two months after surviving a vote of confidence held among his own party MPs, Johnson’s position became untenable when one by one, and then in droves, 60 of his own colleagues, senior and junior, abandoned him by resigning from his council of ministers. When he replaced one of the first to go, his chancellor of the exchequer (or finance minister), Rishi Sunak, with a rising star of Iraqi Kurdish origin named Nadim Zahawi, the latter’s first act was to advise his own boss to resign. A delegation of cabinet ministers and party grandees then called on Johnson, telling him his position was unviable. The prime minister saw the writing on the wall, and quit.

Johnson, understandably, blamed the “herd instinct of Westminster” for his exit. Once a herd gathers momentum, he reflected ruefully, it becomes unstoppable. At a time when, as he pointed out, he was working to fulfil the promises that had got him elected in 2019, his party was just marginally behind Labour in the polls and the challenges facing the nation warranted a steady hand at the helm, the herd had voted with its feet.

In India, all this would be unthinkable. Every political party in our country is constructed around fealty to its leader—whether an individual, a family, or a cabal. For any Indian MP, let alone a cabinet minister, to resign on grounds of lack of faith in the leader’s integrity, is impossible to imagine. It has never happened, partly because people in positions of power (or even just in office) prefer to cling on to it, and partly because such an act will merely seal the resignee’s political irrelevance, not his boss’s. The leader will always prevail. 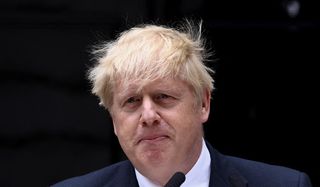 The Johnson episode is all the more difficult for observers of Indian politics to imagine because he is actually the prime minister of the country. In India it is equally improbable within an opposition party. The preferred Indian way of handling discontent with a party leader is to grumble and complain, and to do so privately, behind closed doors. The grumbling is infused with the awareness that action on the complaints is impossible. The leader just “is”. He cannot be unseated, not least since no party has a mechanism for doing so, and no politician is willing to take the risk of trying. If he is upset enough, he quits and joins another party. He doesn’t challenge the existing one.

In Britain and most parliamentary systems derived from it, party leaders are subject to period renewals of their mandate, often at fixed intervals or whenever the party’s processes call for it. In most of them a specified number of members can call for an out-of-turn confidence vote, something Johnson had to undergo recently (ironically, he prevailed). After an election defeat, by convention, the leader resigns, and unless the party unanimously clamours for him or her to stay—which has happened very rarely in western parliamentary democracies—he or she steps aside gracefully and lets someone else try.

None of these things happen in India. Indeed, no party other than the two communist parties even has a fixed period for its designated leader to serve. No party has a mechanism to recall a leader, and even if a theoretical exercise were conducted to elect or re-elect one, the electors are handpicked by the existing leadership and are extremely unlikely to vote against its wishes. The famous example in the Congress, in which the charisma-mukt Sitaram Kesri trounced two popular leaders like Sharad Pawar and Rajesh Pilot who challenged him for the presidency of the party, only proves the point.

Perhaps, for once, it is time for us to ask ourselves whether there isn’t a lesson or two we can learn from what just happened to Johnson?