‘This time, Muslims of India will resist’: Shashi Tharoor on Varanasi

Marginalisation of Muslims from the national narrative continues

The controversy over a court order authorising a video inspection of the Gyanvapi Mosque in Varanasi is one more reminder that in India debates over history are not confined to the distant past alone. The assumption behind the request is that the mosque was built on a demolished temple; if this is confirmed, demands will inevitably arise for that temple to be restored, as with the Ram Janmabhoomi in Ayodhya. Whereas conservatives, in the famous phrase, are ‘standing athwart history, yelling stop’, our hindutva nationalists are yelling ‘turn back! Reverse!’ Their reinvention of history is not anchored in a reverence for the past, but in their desire to shape the present by resurrecting the past.

History has often been contested terrain in India, but its revival in the context of 21st century politics is a sobering sign that the past continues to have a hold over the hindutva movement in the present. While the Mughals are being demonised as a way of delegitimising Indian Muslims (who are stigmatised as the sons of the invader Babur rather than of the Indian soil), hindutva fanatics want to rebuild the most prominent of the Hindu temples the Mughals allegedly destroyed. 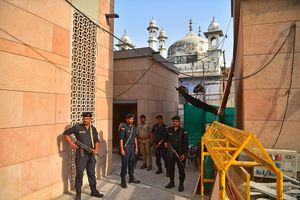 Those who thought that victory in Ayodhya would be enough for the Hindu zealots are realising that they are like the sharks who have drawn first blood, like the taste, and thirst for more. As with the temple that is now being erected on the site of the old Babri Masjid, those who are raking up the Gyanvapi issue want to avenge history by undoing the alleged shame of nearly half a millennium ago.

When will it stop?

India is a land where history, myth, religion and legend often overlap; sometimes we, as a people, cannot tell the difference. The Supreme Court verdict on Ayodhya ruled that a Ram Mandir should be built, and that the religious sentiments of the Hindus had to be respected—implying both that such sentiments were of greater weight than legal provisions, and that the religious sentiments of the minorities were of less consequence than that of the majority, even though the demolition of the Babri Masjid was illegal.

To most Indian Muslims, the Ayodhya dispute was not about a specific mosque. Rather, it was about their place in Indian society. The destruction of the mosque felt like an utter betrayal of the compact that had sustained the Muslim community as a vital part of India’s pluralist democracy. Others, however, felt that the court’s decision restored constitutional processes after the vandalism and violence that had marked the dispute for a generation. Most concurred that it would buy peace for the community. Gyanvapi, now, suggests that hope was misplaced.

In fact, the zealots have been emboldened by the projection of Ayodhya as a triumph for a hindutva reinterpretation of the Indian national idea, and as a building block in the construction of a new hindutva version of India. The ideal of inter-faith co-existence in harmony has been jettisoned; the marginalisation of Muslims from the national narrative marches on. The prime minister conducted the puja at the site; the celebrations at Ayodhya, openly involving state machinery, were a significant step towards declaring an official state religion. “Hindu Rashtra” is being built before our eyes.

This is the process that ominously seems to have begun anew at Gyanvapi.

Let us assume that indeed the mosque was built on the site of a destroyed temple; does that mean we should open a gaping wound now, provoking civil strife today in order to avenge the past? Is there no case for letting old wounds that have long healed stay undisturbed? To destroy the mosque and replace it with a temple would not right an old wrong but perpetrate a new one.

The alarm bells are ringing again in Varanasi. This time the Muslims of India will resist. Once again the violence will resume, spawning new hostages to history, ensuring that future generations would be taught new wrongs to set right. The BJP is happy to use history as cannon fodder; but in their obsession with undoing the past, it is our future they are placing in peril.