It may be a cliche, but the speed of change has accelerated remarkably in the lifetimes of most people reading this column.

It was not always this way. The India in which I grew up in the 1960s and 1970s was a largely unchanging place. Change was incremental and evolutionary, which is to say that it took its time to happen and one could barely notice it. People’s homes, means of transportation, the products they consumed, what they read, how they communicated, the equipment and instruments they used at home and at work, what they heard from public service broadcasters, and their social relations and business practices in, say, 1975 were not very different from those of 1950.

But between 1975 and 2000 there was a revolutionary change—and it did not stop. Change came to our country like a bullet train and kept on roaring past, taking us along with it. Though 1991 was the watershed in India, the preceding decade-and-a-half had already seen the expansion of TV and the advent of colour, the introduction of computers in the face of leftist resistance, and the advent of new technologies in the workplace, including word processors and fax machines. 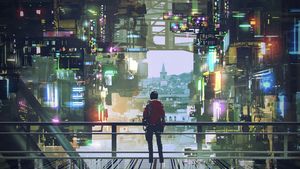 Then, along with liberalisation, came foreign cars and consumer products, PCs and mobile phones, the Internet and email, business process outsourcing and international call centres. Companies were born in fields that most people did not know existed. Young graduates had opportunities unavailable to my generation, of new subjects to master and new professions to pursue.

Then change picked up more speed. New businesses started and collapsed. What was a sunrise industry in 2005—say medical transcription, for instance—became obsolete by 2015 (in the case of medical transcription, it was thanks to the development of cheap and accurate voice-recognition software). Literacy is soaring, but people no longer write letters; they call their loved ones on the phone, or text and email them. Entertainment no longer comes from a government TV channel or a disc, but is delivered to your phone. Books can be read from hand-held screens; libraries are installing computer work-stations in order to stay relevant.

“Work from home” has become not just possible but preferred, thanks to two years in the grip of the pandemic. Work itself has been transformed by video-conferencing, offices are turning increasingly paperless, innovations in telemedicine are soaring, and every week brings rumours of dramatic new breakthroughs in Artificial Intelligence, robotics and other fields that will make our daily lives unrecognisable. It is no longer safe to assume that tomorrow will look like yesterday; indeed, you cannot even be sure that tomorrow will look like today.

The era we are living in is as exciting as the late 19th and early 20th centuries, when the telephone was invented, electricity was tapped and the automobile came of age, all at roughly the same time. Experts tell us that the period of disruption, reinvention and transformation that the world underwent because of the onset of these three technologies may well be mirrored in our own era.

As we gaze towards tomorrow, we are witnessing dramatic technological progress in five areas: robotics and the use of remote-controlled machines, energy (including new and more affordable forms of “green” energy and its storage), artificial intelligence and machine learning, blockchain technology, including the emergence of cryptocurrencies, and genomics and DNA sequencing. Each of these, evolving in parallel, holds the promise of bringing about dramatic transformations in our lives.

As the American inventor and futurist Ray Kurzweil observed, we will not experience 100 years of progress in the 21st century, but 20,000 years of progress. Every company and industry, every business and enterprise, can be certain of one thing: that it will either have to be a disrupter or be disrupted, or both, in the foreseeable future. Adjusting to change must be everyone’s mantra. Standing still will prove the best way of moving backward—and being left behind, as change whirls on.