The global spread of the Omicron variant of the coronavirus has everyone reacting with varying degrees of alarm. Is it, as a hopeful study from South Africa suggests, more transmissible but less lethal? Might it even mark the beginning of the end of the Covid pandemic, a sign that the dreaded virus is mutating into something no more harmful than the regular flu?

No one really knows—at least not yet. But the rise of Omicron has added renewed urgency to worldwide concerns about vaccine inequality and the global pandemic response. Soon after the new variant was reported to the World Health Organization by South Africa, leaders began discussing what to do if renewed pandemic outbreaks become a recurrent feature of human life. Is it not time, some asked, to prepare a new international agreement to better deal with these, in what one might call a “pandemic treaty”? In November, the issue has been debated at a special session of the World Health Assembly (WHA), the WHO’s governing body, where 32 health ministers supported a treaty. 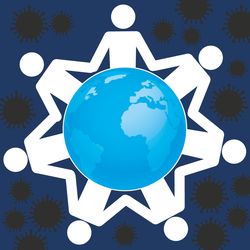 The fact that Omicron was first discovered in South Africa itself confirms why such a treaty is required. The arrival of a fast-spreading virus variant from an under-vaccinated country underscores the slogan we have heard ever since the pandemic first emerged: “no one is safe until everyone is safe”. We need an international legal instrument to establish a global structure that would identify threats of pandemics early on and help ensure the production of vaccines or other drugs at adequate levels and in a timely manner. That is what poorer countries want.

The reaction of rich and powerful governments to the idea, though, does not augur well for such a treaty. All governments prefer to look after their own people first.

A year ago, I argued in this space that Covid may well have heralded the dawn of a new age of de-globalisation. Even the outbreak of Omicron has confirmed the absence of any global spirit among nations. Immediately, governments responded with restrictions and even outright bans on entry into their countries of travellers coming from lands with confirmed cases.

All this raises the obvious question: will the world once again descend into “every government for itself”? We have already seen countries hoarding vaccines, protecting manufacturing technology and reneging on contracts and commitments to supply vaccines to others. The rich nations have prioritised their own people, imposed the most severe travel restrictions and ignored the desperate calls of poor nations (and the WHO itself) for global cooperation to stem the pandemic.

Ironically, one of the casualties was the cancellation of a ministerial meeting of the World Trade Organization’s TRIPS Council which was supposed to discuss a temporary waiver of intellectual property rights for coronavirus vaccines. A waiver could have allowed manufacturers to make cheaper, generic versions of highly efficient coronavirus vaccines and medicines. Rich countries, notably in Europe, have opposed the proposal.

If a mere waiver could not get off the ground, is there any hope for a pandemic treaty? Its champions seek an international agreement that could commit governments to produce a certain number of vaccines, maintain a level of manufacturing infrastructure that would serve the world and not just their own people, and participate in global surveillance efforts to help identify new viruses.

These all seem obvious priorities for a world reeling from the onslaught of Covid, but the response of governments has been disappointingly tepid. If we do not achieve a treaty, the next virus outbreak could see the world making the same mistakes all over again.