Why a new Parliament, when Modi does not respect the house, asks Shashi Tharoor

Prime Minister Narendra Modi recently launched a full-frontal assault on critics of his Central Vista scheme, accusing them of spreading “lies” and “misinformation” and being opposed to India’s progress. The Vista’s redevelopment, he argues, will represent New India after 75 years of independence, and cast off the colonial Lutyens “face” of New Delhi. “India is the mother of democracy. Therefore, the capital of India should be such that its central focus should be people,” he said.

This is a curious argument since the imperial legacy of Lutyens Delhi was transformed decades ago by a new, democratic India. The area between India Gate and Rashtrapati Bhavan, which the government seeks to remake, has indeed been focused on the people. It is at present a grassy, pleasant place where, on any given day, families can be seen enjoying the lawns, eating ice cream, and strolling. It is a truly democratic space, freely accessible to the people. 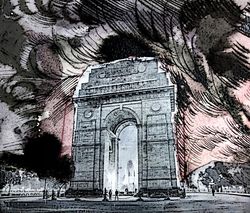 That will all change: a leading architectural magazine called the prime minister’s dream project “a retrograde and anti-ecological urban plan” which could “turn an entire stretch of the Rajpath, once so free and easy, into a surveyed security zone”. The government’s decision to push ahead with the construction of this project during the mismanaged Covid pandemic is an act of staggering arrogance, exposing its indifference to the interests of ordinary Indians. The project costs 020 lakh crore at a time when adequate oxygen supplies were unavailable during the nightmarish Covid “second wave” earlier this year, migrant labourers walked hundreds of kilometres after a disastrously implemented lockdown last year, and the people of India, reeling from the economic crisis, received the most meagre fiscal stimulus of any major economy.

Changing the physical face of Lutyens’s Delhi is essentially a show of power, a desire to stamp the national capital with the seal of Moditva. The “edifice complex” of this government’s fantasies reeks of a Mussolinian air, a taste for the grandiose that has nothing to do with democracy in either substance or process. The BJP’s governance style is one of unilateral top-down decision-making, with not even the pretence of consulting the public, the opposition, or indeed even architects, environmentalists, or parliamentarians. The wholesale destruction of many much-admired buildings, including the National Museum and the recently completed Jawahar Bhawan, in favour of banal and repetitive cookie-cutter government offices, is deplorably wasteful. It is one more shameful attempt to dismantle the idea of democratic India itself.

Instead of focusing its energies on building a new Parliament, perhaps the government should take stock of its shameful behaviour in the one we already have. When you have reduced Parliament to a notice-board for your unilateral decisions, disembowelled the standing committees by refusing to discuss legislation in them, and got your pliant majority to rubber-stamp all the bills you want to shovel through without debate, what difference will a new building make?