Everyone must follow international rules, even the US, says Shashi Tharoor

On June 24, the United Nations General Assembly voted for the 29th time in a row to censure US sanctions on Cuba. A staggering 184 countries supported the resolution condemning the US economic embargo on the Communist-run Caribbean island-state, three abstained, and four did not vote at all; just two states voted against the resolution—the US and Israel. The US promptly made it clear that it will, yet again, disregard the overwhelming opinion of the “international community”. The sanctions will continue. So what makes the US the self-proclaimed defender of a “rules-based international order”?

The question is increasingly relevant as the world seems to be dividing along a new binary—between an ominously resurgent China, bent on asserting itself through “wolf warrior diplomacy” as the new gorilla on the global beach, and a group of beleaguered democracies, led by the US, who seek, they claim, to uphold the rules-based liberal international order established since 1945.

The idea of a rules-based system goes back to the founding of the UN 76 years ago. In 1945, the UN’s far-sighted founders—determined to make the second half of the twentieth century different from the much-troubled first—drew up rules to govern international behaviour, and founded institutions in which different nations could cooperate for the common good.

Their idea—now called “global governance”—was to create an architecture that could foster international cooperation, elaborate consensual global norms and establish predictable, universally applicable rules, to the benefit of all. After 50 years in which the world had suffered two world wars, countless civil wars, brutal dictatorships, mass expulsions of populations, and the horrors of the Holocaust and Hiroshima, the world would be governed by international law. Everyone would follow the same rules.

The new UN would stand for a world in which people of different nations and cultures would look on each other, not as subjects of fear and suspicion, but as potential partners, able to exchange goods and ideas to their mutual benefit. A place where small states and big would be able to work as sovereign equals, pursuing common objectives in a universal forum, observing common rules of engagement.

As US President Harry Truman, addressing the San Francisco Conference that founded the UN, observed: “We all have to recognise, no matter how great our strength, that we must deny ourselves the license to do always as we please. No one nation... can or should expect any special privilege which harms any other nation.... Unless we are all willing to pay that price, no organisation for world peace can accomplish its purpose. And what a reasonable price that is!” 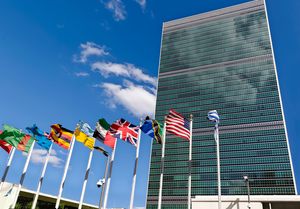 But in the decades since, the biggest defenders of the established world order have let it down the most. USA’s behaviour in sanctioning Cuba, despite the disapproval of the rest of the world, is often seen as a typical example of its attitude. If the rest of the world disagrees, the US, instead of abiding by the rules and heeding the majority, does its own thing anyway.

Examples like these abound. The US condemns China for its expansionist behaviour in the South China Sea, and asserts the principle of freedom of navigation—but it refuses to sign or ratify the very Law of the Sea that it excoriates the Chinese for violating. Washington waxes indignant, often selectively, about human rights violations in an assortment of countries—but it not only has not ratified the establishment of the International Criminal Court, but also passed a law authorising its armed forces to use violence to extricate any American citizens who might one day be arraigned by the Court.

In other words, critics of the US assert, its advocacy of a “rules-based international order” is not about the rules, or the order, that the rest of the world wants, supports and votes for. It only stands up for the rules that suit it.

When Truman waxed eloquent about the importance of international law that would bind big and small, strong and weak, equally, he was making a simple point that is essential to any democracy. If you want to uphold a rules-based system, everyone must follow the same rules. Even the world’s biggest superpower.