It is fascinating for old hands of global diplomacy when new terms of art emerge and find widespread acceptance. This has happened to the “Indo-Pacific”, an expression that comes up often in my conversations with foreigners—sometimes self-consciously, sometimes automatically, and sometimes with the slight tone of deference that is used by those who are striving to be politically correct.

Whatever the case may be, the idea of the Indo-Pacific breaks down the separation of East Asia conceptually from South Asia and links the two geopolitically. At the same time, the term reflects three interrelated developments. The first is China’s declared intention of developing a blue water navy and becoming a transcontinental economic giant. The second is India’s emergence as a regional power and a possible counterbalance to China. And the third is the role which the US will play in shaping the contours of the seemingly irresistible shift in power from west to east, and from the Atlantic to the Indian and Pacific Oceans. Taken together, the ideation of the ‘Indo-Pacific region’ captures the growing might, geopolitical interests, and normative visions of these powers in a dynamic region.

Within the confluence of these complex developments, India’s vision of the Indo-Pacific is one that strives to ensure a free, open and rules-based maritime space that respects each nation’s strategic autonomy and where no individual player or alliance seeks to undermine this in the quest for greater influence in this region.

But Beijing and Moscow object to the conceptualisation of the Indo-Pacific as a strategy to contain China, which remains Russia’s largest trading partner, and with whose geo-strategic interests Moscow is increasingly aligned. India cannot afford to completely disregard consistent criticism from Russia, which continues to provide the majority of our defence imports. 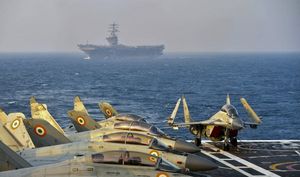 And, yet, Russia’s objections point to how far Russia and India have travelled from each other in recent years. So far, India has been equidistant from the US and China, a position Russia prefers us to maintain. But it is difficult to be equidistant between a country that has killed 20 of your soldiers and transgressed your border, and another that you have no quarrel with and that tries to be supportive.

Our foreign policy is not determined by one violent standoff and the violation of our territorial sovereignty alone, but such incidents cannot be lightly brushed aside. Beyond its belligerence on the LAC, China has increased its support for Pakistan, spending more than $90 billion on a highway to the Chinese-run port of Gwadar. The importance of Pakistan to China’s Belt and Road Initiative binds the two countries closer together than before.

So India has deliberately embraced the US concept of a “free and open Indo-Pacific”, and is gradually abandoning its reluctance to participate in the US-led “Quad”, focused on countering China’s regional ambitions. The last Quad summit called for the Indo-Pacific to remain ‘free and open … anchored by democratic values and unconstrained by coercion’.

But whether these lofty ideals will translate to mutually agreeable outcomes remains to be seen. For instance, the recent military exercise by the US navy in India’s backyard, without prior notification too, let alone an official nod, has not gone down well in New Delhi. Similarly, while the joint statement talked about greater cooperation on vaccine production and distribution, in recent weeks Indian media has placed a growing spotlight on the US embargo on certain vital raw material that is required for vaccine manufacturing by Indian producers.

The Quad is therefore not an incipient Indo-Pacific NATO. The Indo-Pacific will remain a centre for maritime and economic cooperation and a facilitator of the huge volume of global trade that flows through this region. Our ultimate objective in the region has to remain the peace, security and development of all. At a time when all of us are threatened by a deadly virus, climate change and rising levels of poverty and income inequality, that is all that geopolitics ought to be about. Even in the Indo-Pacific.