Even as the world continues to grapple with the ravages of the Covid pandemic, strategists with an eye on the long term are contemplating a potentially equally crippling prospect: the onset of a “new Cold War”, this time between the US and China.

US Secretary of State Antony Blinken has dubbed Beijing a “threat to global stability” and denounced its record on human rights and trade. China has been equally harsh in its condemnation of US “imperialism” and domestic problems, including racism. Beijing has made no secret of its disdainful view that the US is a country in terminal decline.

The Biden administration appears to be embarking on establishing a network of alliances against China. Likely areas of competition with China go beyond the conventional geopolitical issues to challenges in cyberspace and the risks of technological conflict. American thinkers have called for policymakers to evolve a comprehensive strategy to counter China, much as George Kennan’s famous “Long Telegram” from Moscow in 1946 led to the birth of the “containment strategy” that hemmed in the Soviet Union.

Ideology is seen as key to the division of the world into duelling camps. President Biden wants to forge an “alliance of democracies” against the world’s “autocracies”. The Quad is seen by some as the nucleus of a future such alliance. Democracy and liberal values are essential to keeping such an alliance together and to demonstrate that this is not just another amoral contest for military or geopolitical supremacy. This is why Washington prefers to couch its vision as being about principles, democratic governance and the maintenance of international order. 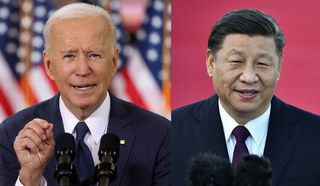 But “Cold War 2.0” is not inevitable. The Biden administration does seem to be more nuanced than its predecessor in its approach to China. Blinken has acknowledged that the relationship with China has adversarial, competitive and cooperative aspects. This was not true of the US-Soviet Cold War, where there was simply no economic interpenetration between the two blocs and almost no examples of cooperation, let alone investment or significant trade.

The countries that the US might hope to rope into its project also have complex concerns. Countries in southeast Asia would welcome the US or the Quad offering a counterweight to Chinese hegemony, but they are too conscious of their economic dependence on Beijing to espouse any overt hostility.

Even the Quad countries have too much at stake in their economic relations with China to simply write off the relationship. China is not known for its ideological zeal to convert the world to communism; it is far more interested in finding itself a dominant place in the current world order than to overthrow the international system.

Nor are there any proxy wars littering the landscape as in the original Cold War, nor much of an appetite for any in either Beijing or Washington. Positing another Cold War, therefore, overstates both the current situation and the risk of any threat from China to the global order.

It is also inescapable today that current global crises like the coronavirus pandemic and environmental disasters oblige the US and China to confront the same problems, face the same threats and seize the same opportunities. What we used to call, in my UN days, “problems without passports”, require blueprints beyond borders to resolve. Global cooperation would serve the world better than intensified rivalry.

As the Indian writer Pankaj Mishra put it recently in a piece for Bloomberg: “The urgent question today is not whether there will be a new cold war. It is whether modes of thought developed during the previous one… will again dominate political and intellectual life…. The crude division between democracy and autocracy won’t help us grasp such a topsy-turvy world. Though comfortingly simple, such cold war ideologies can never truly replace our messy reality.”

The ideological battle lines are not yet joined. Perhaps, with enough imagination, they will not need to be.