When my son Ishaan―a part-Malayali, part-Bengali, part-Kashmiri, who was born in Singapore and had grown up since the age of six in the US, married an American-born woman and spent his adult life working for a pair of prominent American media houses―announced in 2020 that he had obtained American citizenship, it was America’s “civic nationalism” that he celebrated, taking pains to distinguish it from the “blood and soil nationalism” of other countries.

As a father, who had made the opposite choice in returning to the land of my forebears, I was deeply conflicted about his decision: relinquishing his Indian passport seemed almost a betrayal. And, yet even as that thought occurred to me, I realised how laughable it would seem to those of Ishaan’s generation, who, even as they are connected atavistically from the heart to the land of their ancestors, are far more concerned about identifying the right environment in which they can thrive, than on mystical notions of nationalism within old-fashioned territorial boundaries.

Ishaan reacted to my angst by saying pointedly that he would have been happy to retain his Indian passport too, if only India permitted dual nationality. But India does not, insisting, unlike the US, that national allegiance is indivisible. 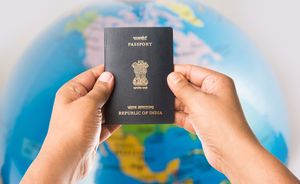 NRIs have long argued that this is iniquitous, because while adopting a foreign country’s citizenship may be a matter of convenience (and sometimes of necessity), giving up Indian citizenship is an assault on their faith and pride. But India only grants its non-citizen diaspora a certificate fraudulently called an Overseas Citizenship of India, which it is not: it is merely a lifetime visa, which can (as happened during the 2020 pandemic) be suspended or revoked in exactly the same way as other visas.

Many in the diaspora argue that in today’s world of large-scale and rapid migrations, the passport one holds is no proof of one’s fundamental
affinities and loyalties. Though not everyone’s motives are entirely idealistic, most NRIs who clamour for dual citizenship do so for reasons that have more to do with emotional identification than practical advantage.

In fact, the Indian policy towards its diaspora reeks of bad faith, placing its expatriates in the invidious position of either retaining their Indian passport, and so seeming to exploit their host countries, or depriving themselves of their motherland if they choose a different passport. But as I know from my efforts to raise the issue, there is no traction in the Indian establishment for the idea of offering dual citizenship to diaspora Indians. And so many who would have loved to remain Indian, too, while affirming their commitment to new lives elsewhere by claiming those nationalities, have no choice but to forgo their instinctively patriotic first option.

I have discussed this dilemma in my new book, The Battle of Belonging.

Those in the diaspora who have not given up their Indian passports want more. One increasingly vocal demand has been for the right to vote. NRIs, who are full-fledged Indian citizens working abroad, have made the point that while they are invited, indeed expected, to make a contribution to the country’s development and its balance of payments through their remittances, bank deposits and investments in Indian industry, they are allowed no role in influencing the policies of the country as voters. India is one of the few democracies in the modern world that have developed no tradition of absentee balloting for national elections, with the result that citizens living abroad are, in effect, disenfranchised. In 1991, the Kerala High Court even admitted a petition challenging India’s electoral laws, but the case went nowhere. Today only those NRIs can vote who are willing to travel to their home constituencies to do so, an unaffordable privilege for the vast majority.

If NRI citizens are indeed given the right to vote from abroad, the politics at least of Kerala―a state with millions of Malayalis working abroad, and whose election results are often decided by margins of a few thousand votes or less―would be dramatically affected. But that is no reason to deny Indian citizens the right to exercise their democratic franchise. Dual citizenship could then be the next step.