In the wake of the brutal clash between Chinese and Indian soldiers in Galwan valley, some strategists have begun to ponder the previously unthinkable. Should India shed its habitual reserve about alliances and join those who, led by the US, are speaking openly about “containing China”?

Hitherto, the obvious answer has been “no”. India, a founder of the non-aligned movement during the Cold War, has been allergic to alliances and feels no desire to put all its strategic eggs in one basket. India is still heavily dependent on Russian military equipment, though it has diversified its purchases to include American, French and Israeli armaments. And Donald Trump’s United States has never struck India as a particularly reliable partner.

Also, trade with China had climbed up to $92.5 billion, and if not for Covid-19, was expected to touch $100 billion this year. Modi, who has visited China five times as prime minister, has met President Xi Jinping more often than any other world leader and just eight months ago hailed “a new era of cooperation between our two countries”.

That cooperation has been jolted by the developments on the disputed 3,500km border, the Line of Actual Control. Shrill voices argue that India should embrace the US concept of Indo-Pacific region and upgrade the US-led Quad, deepening its strategic ties with Australia and Japan. China, the argument runs, must be curbed, and we cannot do it alone. No one wants war: containment should be the name of the game.

I am not sure. I am no fan of Xi’s more assertive and coercive China, which seems to have abandoned its old reassuring talk of a “peaceful rise” to belligerently flex its muscles with its neighbours, including Japan, Vietnam, Taiwan, the Philippines, Hong Kong and now India. But I see merit in us continuing to engage China bilaterally and multilaterally, while trying to constrain, rather than contain, its assertiveness.

The difference between containing and constraining is not just two letters of the alphabet. A containment strategy refuses engagement and persuasion; it is a hostile policy. Constraining, on the other hand, engages with the adversary to restrict or limit the destabilising aspects of its behaviour. Australia’s former foreign secretary Peter Varghese puts it well: “Containment seeks to thwart and weaken the PRC. Constraining seeks to manage a powerful PRC.” 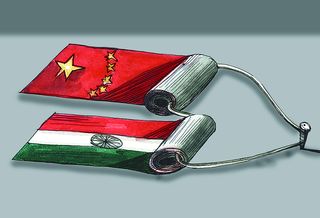 Constraining China would not involve turning the Quad into a military alliance. India is right to preserve its strategic autonomy by refusing to entangle itself in alliances. Rather, it is a means of China’s neighbours using their diplomatic, geopolitical and military leverage to manage Beijing’s ambitions in a manner that limits how much it can get away with.

Coordinating with the Quad countries—the US, Japan, India and Australia—is a way of maximising that leverage. I would go farther and expand the group to include countries like Indonesia, Singapore and South Korea, who have similar concerns about China’s newfound assertiveness. Together we can, in Varghese’s words, “collectively constrain coercive behaviour by the PRC and impose costs for such behaviour”.

New Delhi should continue to keep all its lines of communication open to Beijing while working on a constraining strategy. We should continue to increase our trade (while diversifying our supply chains so that we are not overly dependent on a flow that can be turned off). We must continue to cooperate in regional and multilateral organisations like the UN. We must also engage with China in multiple forums like RIC, BRICS and the G20.

China should not feel that we are treating it as an enemy, despite its support for Pakistan. But we should recognise the divergence of strategic fundamentals. It is in our interest to “constrain” China, not to “contain” it.