An era of deglobalisation?

Though it is too early to assert this with any certitude, it seems increasingly likely that Covid-19 will inaugurate an era of deglobalisation. The signs are mounting that the world may embrace isolationism and protectionism in a far more enthusiastic way than prior to the outbreak, including in India.

The indications are evident. The pandemic has confirmed, for many, that in times of crisis, people rely on their governments to shield them; that global supply chains are vulnerable to disruption and are therefore unsustainable; and that dependence on foreign countries for essential goods (such as pharmaceuticals) could be fatal.

There is a rush to reset global supply chains and raise trade barriers. The demand for more protectionism and “self-reliance” (echoed in Prime Minister Narendra Modi’s call for “aatmanirbharta”), for bringing manufacturing and production value chains back home or at least closer to home, is mounting. Along with the global flow of capital and investments, multi-border pipelines and energy grids, as well as international travel across free and open borders, all seem vulnerable in the post-Covid-19 era.

The world economy had thrived since globalisation began in 1980 on an open system of free trade. That had already been shaken by the financial crash of 2008-2009 and the American trade war with China. With Covid-19, exports are falling everywhere, and indications are that world goods trade may shrink by 10 to 30 per cent this year, if not more. Meanwhile, the increasing pressure to “decouple” from China means that without inexpensive Chinese labour and subsidised inputs, the era of cheap, globalised goods may be over.

Covid-19 has also convinced many that strict border and immigration controls are essential, and that national interests should trump international cooperation. To many, including those around Modi, the answer lies in strong government, in putting the nation’s needs over individual citizens’ freedoms, and in dispensing with democratic niceties, from federalism to parliamentary oversight, in what the government deems to be the national interest. 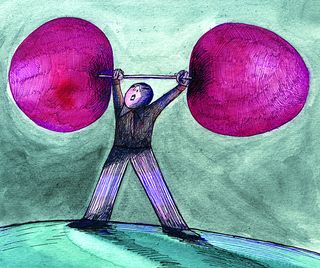 Those of us who had begun to imagine the globe as “one world” will have to revise our thinking. Support for nationalist strongmen may increase exponentially. Unfounded rumours and accusations against people blamed on the basis of their national, religious, ethnic or regional identity have had a field day in many countries. In India, citizens from northeast have suffered racial discrimination because of their supposedly “Chinese” features. Social media and nativist populism have amplified prejudices; the fact that the Tablighi Jamaat gathering just before the lockdown—whose attendees spread the infection to many states when they returned home—was used to justify open bigotry and discrimination against Muslims. The current atmosphere has empowered those who seek to spread communal hatred and bigotry. Similar things have happened elsewhere in the world.

There is no doubt that the Covid-19 pandemic was a “mega-shock” to the global system—one that is likely to disrupt the existing world order. As sovereignties are reasserted across the world, and treaties and trade agreements increasingly questioned, multilateralism could be the next casualty. President Trump’s announcement of the withdrawal of the United States from the World Health Organisation may be a harbinger of a greater unravelling to follow—of the international system so painstakingly constructed after World War II. Instead of strengthening the capacity of our global institutions to cope with a future crisis, the world’s reaction to Covid-19 may well end up destroying the most fundamental feature it has exposed—the idea of our common humanity.