Why we should increase our retirement age

This month, my mother turns 83 (or 84, depending on whether you go by her memory or the possibly inaccurate date on her passport). She is amazingly fit and mentally agile, and at year’s end she is travelling with us to the other end of the world for a New Year’s reunion of her entire family of descendants— three children, seven grandchildren, three great-grandchildren and assorted spouses. It is intended to be a celebration of our togetherness, despite the quirks of geography—among this brood, there are now three nationalities and nine different addresses around the world. But it is also a celebration of her active longevity, because somewhere between 83 and 84, she hits the fabled sathabhishekam, when she will have seen a thousand moons orbiting the planet.

(I know many Hindus celebrate the sathabhishekam in their 81st year, but they are mathematically challenged. Since you basically witness 12 moon orbits a year, 80 clocks up only 960 moon orbits, and you need the extra three years and four months to reach 1,000. Letters of protest may kindly be addressed to the editor and not to me.) 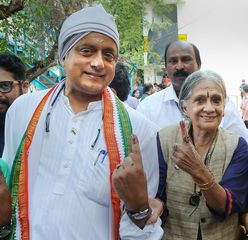 Shashi Tharoor with his mother after casting vote during the third phase of the 2019 Lok Sabha elections, at a polling station in Thiruvananthapuram | PTI

What is going on here? Is this another disinformation campaign by the oldies among us, trying to vindicate their creaking joints, swollen knees, aching backs and greying hair by purveying fake news about their superiority to the fit, energetic, six-pack-sporting, young whippersnappers who are actually producing everything that matters in the world?

Looking back at my own life, next month I will publish my 20th book. Ten of those have seen the light of print since after my 50th birthday. There is little doubt that I have been more productive in my sixth and now seventh decade than in my (at least partially) misspent youth.

There is a logical reason for this. It is true that when you are young you are still feeling your way, acquiring the skills you need and laying the foundations of your future achievements. Most of our 20s and 30s are spent on romance, on wooing our future partner, and in creating and bringing up our family. The responsibility of making a living, of educating our children, and of taking care of our parents is a time-consuming one that inevitably distracts us from a single-minded focus on professional accomplishment.

In other words, most people’s social and personal circumstances mean that their lives are so designed that the best years of their existence are between 60 and 80. That is the age when they have acquired whatever skills they are likely to acquire, have made (and learned from) their mistakes, and can focus on sharpening and deploying those skills. Thanks to modern medicine, most people are able to remain reasonably healthy past 60 and, even if physically slower, remain capable of top-quality intellectual performance. It is an age when there are fewer distractions. It is the time when you can do your best work.

This is why it is a crying shame that the arbitrary tyranny of retirement age deprives so many offices of performers at their peak. While most western countries have increased their retirement ages to 65 and 70 (and the US has outlawed compulsory retirement altogether), we are still letting people go when they could be making a major difference. In Kerala, government employees still retire at 56. (Politicians, of course, never retire. They just fade away.)

So, if you are turning 60, don’t give up: remember the best years of your life lie ahead!