Speak the truth on Joshimath

NDMA’s gag order will harm the Himalayan towns and science

A lie can travel halfway around the world while the truth is putting on its shoes—so goes a saying wrongly attributed to Mark Twain. In this age of WhatsApp history and social media fake news, a lie would not only travel the whole way around the world, but shake the earth before truth finds its shoes.

The earth is now shaking in India; truth has found its shoes, but is barred from stepping out.

The whole world and all its geologists knew since the days of Thomas Oldham that the Himalayas are fragile, and that Mother Earth, sitting on her slopes, could slip and fall. His son Richard, who would discover the earth’s core and quake waves, studied the 153 landslides that killed 115 people in Nainital in 1880, and advised to dig drains to divert water from the town. The rulers listened, and in five years they built 62 storm-drains stretching 79km that still take the fury of Mother Nature away from the lake town. Even today’s geologists say, Nainital is the stablest slope town on the Himalayas.

Look at what truth, sought out by the sages of science, can do if found in time, published in time, heeded to in time, and acted upon in time.

Modern India’s earth and space scientists, too, have been constantly in pursuit of truth. Armed with spy-eye satellites (India is a pioneer in remote-sensing thanks to the visionary P.R. Pisharoty) and ground-penetrating radars, they have been measuring the fragility of the hill towns, and publishing data after data. All those data have enabled their colleagues in the labs to publish report after report warning against building too many homes and hotels on the slopes, and against letting too many pilgrim buses and tourist cars up the Devbhumi hills, once sanctified by the sacred footsteps of sages like Sankara.

Yet, government after government have been trashing the data, ignoring the warnings, allowing people to build homes, permitting greedy businesses to set up hotels, and letting pilgrim-tourists clog up nature’s drains on the terra indica non-firma.

Finally, Mother Earth had enough, and shrugged a little, sinking the ground in Joshimath. Only a warning; she killed no one. Bless her! 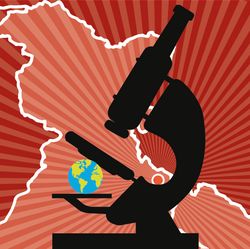 India’s space scientists, as is their wont, jumped in to measure the depression, and reported their findings. Hardly had they published the data when India’s disaster managers told them to shut up. Don’t give out your data; just whisper to us what you found; we know what to do—the National Disaster Management Authority told the ISRO and a dozen or more scientific institutions that have been studying Mother Earth and her mood changes.

Indeed, the NDMA will come out with a full report in due course. But what would be its credibility? Filtered data could be doctored data—the world of science may cry. The Indian scientist’s credibility would go for a toss in the cerebral storm.

As Sherlock Holmes warned in The Adventure of the Copper Beeches, people may make bricks without clay. Rumour mills and WhatsApp scientists would have churned out a thousand theories. As he said in A Scandal in Bohemia, “It is a capital mistake to theorise before one has data. Insensibly one begins to twist facts to suit theories, instead of theories to suit facts.” And who knows—Mother Earth would have had another mood change by then.

Disaster managers, please listen! Time and tide wait for none; nor do quakes, floods or landslides. Let the rajgurus of India that is Bharat, which swears by the Upanishadic motto Satyameva Jayate, speak the truth. Let the rajas and prajas hear the truth.